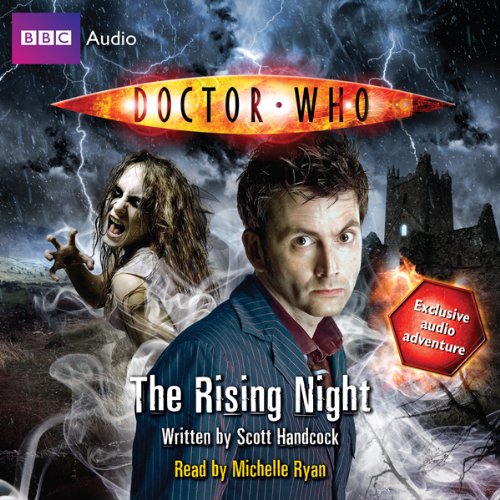 When Harry Winter goes out collecting rocks to repair the wall around his father's farm, he makes a fatal mistake. He disturbs Lucifer's Tombstone, and awakens something demonic and dreadful....

The TARDIS arrives in the 18th-century village of Thornton Rising in the Yorkshire Moors - a village cut off from the world by an all-consuming darkness, where the sun has not risen for three weeks. Farm animals have been attacked, people have gone missing, and strange lights have been seen in the sky.

The Doctor soon becomes involved in a nightmarish adventure, helped by a young local woman named Charity. But who is feeding on the blood of the locals, and where will the carnage stop?

Written specially for audio by Scott Handcock, The Rising Night is read by Michelle Ryan, who played Christina in the TV episode 'Planet of the Dead'.

Vampire alien trying to take over the world

If you could sum up Doctor Who in three words, what would they be?

The Narrator and the female vampire like monster who hypnotizes men to kill them and women to help her kill men and take over the world by building a new race to replace the ones that are now dead.

Which character – as performed by Michelle Ryan – was your favorite?

It kind of gave me the creeps, Michelle Ryan did a really good job with the creepy alien voice and as I listened to this on Halloween it was extra creepy.

A great 10th Doctor story. An unexpected sequel to the classic Doctor Who story State of Decay. A great vampire story The Doctor gets a temporary Companion at the end of story. Her name is Charity . I won’t spoil what makes her deferent from previous Doctors companions, but it would of been interesting if she had a few more adventures with the Doctor. A great story.

Doctor Who The Rising Night

I love Doctor Who, I enjoy audible books about the adventures of the Doctor. This audible has a sad and happy ending.

Michelle Ryan reads it well but the story isn't as interesting as I had hoped. Not as gripping as some other Doctor Who stories on Audible.