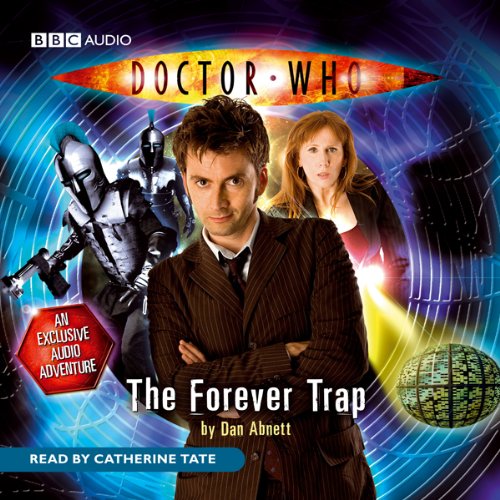 Catherine Tate reads this exclusive thrilling story, in which the Doctor and Donna are imprisoned on the Edifice and become neighbours to a terrifying assortment of aliens.

When the TARDIS is invaded by a holographic marketing scam, the Doctor and Donna find themselves trapped on the Edifice, a purpose-built complex of luxury apartments in space. Their new environs leave much to be desired: millions of beings from across the Universe have been gathered to live side by side in similar apartments. Instead of creating neighbourly affection, it's led to terrible battles being waged in the corridors and on the stairwells.

The Doctor and Donna must cross the paths of deadly alien mobs as they search for the Edifice's ultimate authority. Who, or what, lies at the heart of the incredible complex? What destructive scourge is eating away at the Edifice itself? And are the Doctor and Donna trapped forever in this living hell?

The Forever Trap features the Doctor and Donna, as played by David Tennant and Catherine Tate in the hit BBC Television series Doctor Who. Written specially for audio by Dan Abnett, it is read by Catherine Tate, with additional music and sound effects.

Listening to this, I keep thinking that Catherine Tate must be one wicked party guest. First, she's an excellent reader in general, clear and well-paced. Second, she is an incredible voice mimic. She can't always produce David-Tennant-as-the-10th-Doctor's tone of voice (sometimes the way she lowers her pitch to delineate him sounds slightly odd), but she precisely duplicates every nuance of his delivery. In fact, she mimics Tennant better than he mimics her...as the Doctor-Donna would triumphantly remark, "HA!"

And of course she knows how to speak as Donna Noble, so no problems there. There are various minor characters; each one is distinct and interesting.

The story itself is solid. The dialogue is snappy, and the vibe is pure Doctor Who. When the performance is this top-notch I don't mind some narrative lapses, but this tale is coherent and presents a nice variety of scenes that build on each other and hold my interest in their own right. This is Doctor Who, folks - if you want Dostoevsky or Stephen Hawking or some perfect and glorious combination of the two, go to another section. (Or better still - write your own, and dazzle us mere mortals.) Many of the story threads are derivative of other DW scenarios, but when it's mixed-and-matched to this degree and done this well, it's part of the fun. (Anyway - try coming up with something completely original in Doctor Who after nearly 50 years.) Plus, I loved the overall concept.

I'll be able to listen to this multiple times without getting tired of it. Very glad to have it.

Best of the recent Doctor Who Books

Of all the recent Dr. Who books, based on the new series, this one is the most enjoyable. The narrator (Donna from the 4th season) does a fantastic job with all the characters. The story itself is classic Who and very enjoyable. I highly recommend the book if you are a fan of the TV series.

I got this Doctor Who audiobook by chance. I had been looking for something else. It was well, well worth it.

The Doctor's character is spot on. Donna is hilarious, and it helps that Catherine Tate is the narrator. I think it is the best book out all of them so far. And, trust me, I've read/listened to almost all of them.

Ok, Ill keep this short. If you like the "Donna Noble" Companion played By Catherine Tate, on the Hit BBC TV Show DOCTOR WHO, Then you will Love love love this Audio book! The Book is written by Dan Abnett, ( his name alone got me to buy the book ) the writer behind the Torchwood audiobook "Border Princes", and many other hardcover books, and is read Splendidly by Catherine Tate. A great Mystery full of laughs and adventure in the doctor Who Universe!

Donna Noble For The Win!

What does Catherine Tate bring to the story that you wouldn’t experience if you just read the book?

If it weren't for Catherine Tate narrating this particular story, I wouldn't have been laughing out loud in my car on Highway 80 on my long commute home. Believe me, that alone changes lives around here. :)

Brilliant story read by brilliant woman. Who could ask for more?

One of my fave 10th Doctor stories

I've read and listened to quite a few 10th Doctor stories now and this one is a favorite. I liked the premise, I liked Donna's presence throughout and I liked all the aliens and the resolution. Catherine Tate does a fine job narrating. Of course I'd rather have David Tennant himself read me everything and anything, but I suppose the man does have a life and other projects. A really special moment was when the Doctor explains to Donna what she's seeing through the window. I wish they had done just a wee bit more with that-- did they really leave without a final glance?

If you like the Doctor and Donna, you will love this! Catherine Tate keeps you on the edge of your seat throughout the story and does an amazing impression of David Tennant as the Doctor. The imagery is perfectly detailed, and the sounds/music (while a little cheesy) help make it a classic DW.

This would have gotten 5 stars, but paying almost $10 for a 2-hour audiobook seemed excessive. Catherine Tate is a wonderful actress and her characterizations gave the story life. A very good listen.

This is probably my favorite doctor who audio story. It's a lot of fun, Catherine Tate is amazing. Highly recommended.

Brilliant! It's a good story line and Catherine Tate reads it very well. My favorite so far.

This is a story they should have filmed for the TV show. Unlike many of the books and audio adventures, the Doctor and Donna remain together throughout the story which enables the writer to make the most of the way they play off one another which really was one of the highlights of the relationship between the two of them.

Catherine Tate's performance is excellent. As you'd expect, she can do a pretty good David Tennant impression and all her other character voices are terrific.

If I have a complaint, it's that "The Forever Trap" should have been longer!

Story isn't the best but Chaterine is brilliant

Where does Doctor Who rank among all the audiobooks you’ve listened to so far?

Somewhere in the middle because of the story line of the book, is nice and funny, but could have been better. Although, it could have been in my top 5 if I had to base it on the performance of the brilliant Catherine Tate. She is funny and is great to have the book from Donna's point of view.

Would you recommend Doctor Who to your friends? Why or why not?

I would recommend the book to my friends, once again the main reason is Catherine Tate, I cannot stress on how brilliant she is. The story is light and funny at places, and very serious at some, and despite not being the greatest one is still a good way to pass your time.

Have you listened to any of Catherine Tate’s other performances? How does this one compare?

Yes, I had and this once was as brilliant as the others. The only difference there is in the story line. She takes on a different voices of the different characters very well.

Yes, and in fact I think I did. Not very sure because I have listened to it a couple of times and don't really remember if I had managed to finish it in one go the first time.

The story flowed very well, it didn't get bogged down anywhere

Have you listened to any of Catherine Tate’s other performances? How does this one compare?

Only heard two and this one is better, that could be due to the writing which made her character more faithful to the tv version

A good tale that moves at a fine pace, perhaps too much of a variety of alien life. Catherine Tate gives a great performance and listening to her one can visualise the characters.