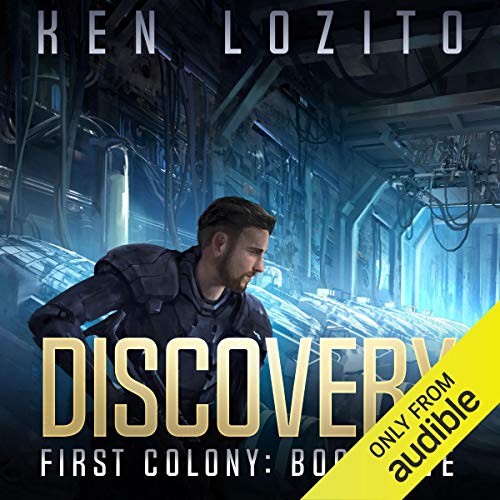 Exploring New Earth should be a thrilling undertaking. Instead, the more the colonists learn about the planet, the more alarmed they become. Alien ruins hint at a species who fought great wars among themselves and disappeared centuries ago.

When Connor Gates discovers a hidden bunker, he finds something he never expected. Everything the colonists have learned about New Earth’s previous inhabitants is wrong. Connor must race to unravel the mystery. The colonists must face the possibility that they are not alone and that New Earth was never theirs for the taking.

i picked this saga after a while and had to ask myself why did I stop😁. it's extremely well written and quite enjoyable, now I need to get the next book

Another great book in the series

I enjoyed this audiobook just as I did the ones earlier in the series. The storyline is getting very interesting, for sure.

Emphasis on slow. A book so short shouldn't have such a slow start. One of the mysteries in the book involve wondering why the main character, Conner is Mayor as well as principal explorer. We gradually discover(with Conner) mysteries associated with the NEIIS (New Earth Indigenous Intelligent Species) apparently pronounced "Newies" and Ryclar. The archaeological techniques using thermite explosives, shovels and hands seem more akin to Schliemman(who used similar techniques to excavate Troy in 1875) than a space-faring archaeologist. Disappointing.

Can't wait for the next one!

Wonderful story, lots of suspense. I can't wait for then next book to come out.

Great storyline but book is too short!

Great group of books and storyline but need to combine two books because it is too short!

they should turn this into a video game! this book just fulfills all my sci to needs.

Where did the original inhabitants of New Earth go? Finally, we start learning about them.

WOW! I love this series

I have been reading the First Colony series from Genesis on. I just finished book seven. In all the books I am eagerly awaiting the next paragraph. Mr. Ken Lozito is an incredible author and I am so very glad that he bailed on the IT security gig. His art is writing. God has blessed this man with a wife and children but also with the ability to take the reader away in an awesome journey. I believe that Mr. Lozito will be writing for many many years and I look forward to the next book.

Another great book by Ken L. I read it in a day; surprisingly turn of events!

they never alone on NEW EARTH

Connor disvover stasis pods with NEIS in them and trys to communicate with a NEIS cslked himself Skylock only to find out his motives to revived a Military Faction that would put1 year ago. New Earth colonies in Jeopardy of their existence,Connor must make to cut all power to the rest of tge remaining stasis pods and prevent a war with and the ryeclaws thar they control, a war that the CDF is not ready to fight after their battkes with Vemus not more then .Then finds out that now Connor and his group are being spied and watch after Noah finds evidence of being under surveillance, now Connor Gates must be careful at all his projects from now o

Enjoyed the book .Strongly advise to read the previous books before this one .
Nice one