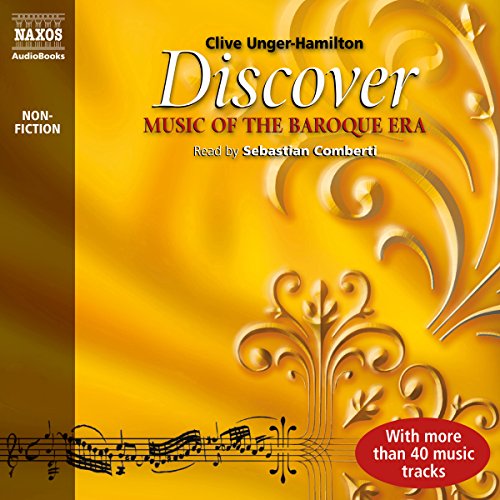 Discover: Music of the Baroque Era

Grandiose and glamorous, Baroque music stands alone, written to glorify the finest courts of Europe, in Italy, France, Germany, England, Austria, and even far-flung Spain. Its greatest composers, such as Vivaldi, Handel and Bach, head a fascinating cast of musical magicians, including Albinoni, Pachelbel, and Scarlatti. Their lives are as intriguing as their music: we find virtuoso performers who earned their bread and butter in the cathedrals of Europe while keeping company with kings and queens, and setting opera houses ablaze across the continent with their fabulous new music. Discover Music of the Baroque Era is rich in musical detail of the time, set against some of the greatest events in history.

This engaging introduction, interspersed liberally with music, shows how the works of these composers graced the courts and churches of Europe from 1600 to 1750. It is a fascinating story.

Unger-Hamilton's survey of Baroque music includes 41 musical selections from such well-known composers as Bach, Handel, and Vivaldi. To an American ear, Sebastian Comberti's British accent and somewhat Waspish voice sound ultra-precise, but his expressiveness and seemingly genuine interest in the material keep him likable and engaging. His French, Italian, and German accents are excellent. His pacing is lively, perhaps a shade quick at times, given the amount of detail covered. The program's audio format makes the musical examples immediately available; the performances are uniformly good. This program is instruction at its best - informative and enjoyable.

Very nice... except for some music illustrations

This is a very short, but still useful, history of Baroque music. The only puzzle is the strange choice of musical examples (less than stellar examples of a composer's work), and their unnecessarily length (5-10 minutes, including many repeats, when 1-2 minutes would be more helpful).

The snippets and examples of music are great recordings, but the text, they are held in skims the surface so quickly that you really can't absorb the context. Had a vague inkling of what the Baroque Music movement was about before hand. Thought I would get a better understanding of it's history and be able to put the composers more into context of the period. Did not really learn anything. Discovered there was a downloadable PDF file listing the musical selections and who composed them after I had finished. Might have to give it a second listen following that outline.