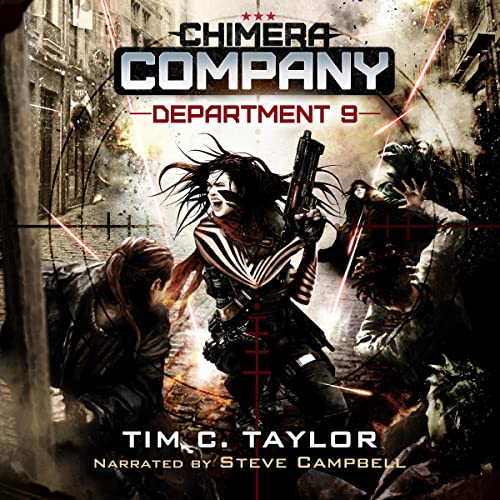 When everyone is an informer…one slip can send you to the camps.

Cut off from the rest of Chimera Company, Lily Hjon and her Militia comrades are sent to Eiylah-Bremah, a totalitarian world where failure to report a crime earns the same penalty as committing it. Following her orders means supporting a regime that sickens her, but joining the rebellion would mean fighting for a group that could be even worse.

Then Lily meets an innocent girl snared by the system, and she knows it’s time to make her choice. The consequences will reach across the Federation, for Eiylah-Bremah is not as isolated as it appears. Pulling strings from the shadows is an organization with an interstellar agenda and a desire to see Chimera Company burn. Department 9.

as the trope says, the third is better than the se

The company joins forces once more for a story that's a little easier to follow...
we learn of a new world, make new friends, but mostly enemies...
we learn more about D9 (hench the name)...
and we learn more of our heroes...
all in all my only real complaint (and the reason for deducting a star) is that there is made no effort to remind you of what happened previously do if it's been a few months, and a few dozen books since you read book 2, you will be scrambling to catch up...

Steve is amazing in this book, a lot of emotions to his performance and the aliens leave you little doubt about being inhuman

I enjoyed this more than book 2, honestly! The story was set in a new world with new allies and even more enemies. The story still got its signature well-described exciting action scenes. And the intrigue got even more intense upon learning a bit more about Department 9. Of course, there's Hubert! The little stinker stole my heart!

Again, Steve Campbell was phenomenal with his narration. He's just that damn brilliant with what he does!