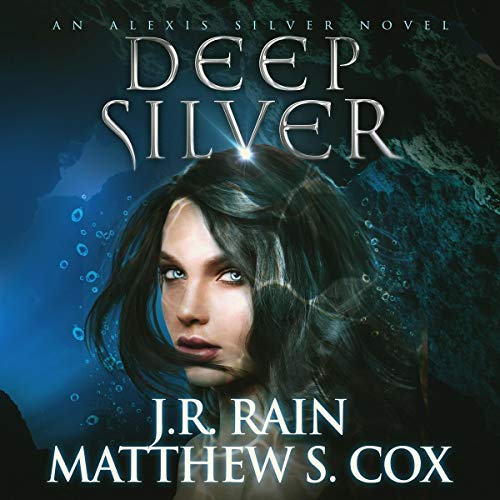 Alexis Silver has always defied convention: In the 1920s, she tried to attend college. She also prefers to live on land, and she doesn’t really care for the taste of human flesh.

Oh, by the way, she’s also a mermaid.

A century of existence comes with a certain amount of boredom, but work as a private investigator in the Pacific Northwest offers a pleasant combination of access to the sea, intrigue, and helping others.

When a well-to-do woman hires her to find her missing adventurer brother, Alexis feels like she’s landed straight in the middle of the sort of action movie they just don’t make anymore. The man’s trail leads all over the globe, but she suspects he’s not dead - yet.

An international mining conglomerate evidently wants whatever the missing explorer has found, and they’re more than willing to kill anyone who gets in their way.

I actually enjoyed this nook a little better and for some reason, I like the adventure and actually like Ethan. Kelley Huston did an amazing job at narrating

The series gets better and better

I loved this book I found I liked it even better than the first book. If you are into fantasy Mermaid books I highly recommend it! there was never a dull moment in the life of Alexis Silver 😊 * I received this free audio book for an honest review*

Book #2 is equally as good as Book #1! I was very excited to continue the plotline. The narrator does a terrific job bringing the characters to life. I was given this free review copy audiobook at my request and have voluntarily left this review.

Amazing! I love this mermaid mystery!

I loved the cozy mystery feel of this book coupled with the paranormal aspect of the world of mermaids! the two cases in this book were both unique and captured my attention and I loved, loved all of the times Alex would reminisce about her history.

Got to love a Mermaid PI

I was so happy to get the second book in this series. Loved it just as much as the first. I won't give spoilers I don't like them. I'm waiting with baited breath for the third one.
The narrator brings the story to life.
I will definitely listen to it again.
This audio book was given to me for free at my request from the publisher or author or narrator and I provided this unbiased voluntary review.

Deep Silver by JR Rain and Matthew S. Cox is the second book in the Alexis Silver series!
I love this mermaid private eye!! Great character and the storyline is fun and easy. I get caught up in the story trying to piece together her current mystery. The inner dialog she has with her mermaid self just cracks me up. The audio narration is very well done!!
I can't get enough!!

I really enjoyed this the second book in this series. Alex is a mermaid and a PI, who has a couple of cases that she takes at the same time. The one she thinks is going to be boring turns out to be the more interesting one for her.
This definitely isn't your typical mermaid story and I love her relationship with Licinia. I read and listened to the audiobook of this and enjoyed both

Another fun romp with Alex

This was a fun story, and I continue to really like this series. Alex is just a really enjoyable character, and the authors have excelled at putting her in interesting but believable situations that force her to be inventive and are fun to watch unfold. The narration was also fantastic, various accents and all. Looking forward to the next installment in Alex's adventures.

I was excited about listening to the second book and was not disappointed! This book is full of mystery, excitement, flirtation, and much more! I am hooked!

This series gets better with each book. I love the female lead and the author does a fantastic job of mixing paranormal/fantasy with the modern world. The narrator is wonderful at bringing the story & characters to life. I look forward to more in this series & from this author & narrator

A short easy to listen to story

Good book but uses repetitive information when not needed and also patches of information dumping rather than writing a fuller story.

This book was great, the story constant no boring bits that you fast forward. Alex is a great character, although was hoping that It was going to merge with the first book but realistically it’s a very entertaining stand-alone. Kelley Huston as narrator gave it live you could imagine every part and feeling. Loved both books looking forward to book 3

Don’t drink while you are listening to this....

It might save your iPad when you laugh at loud at some of the things that Alexis comes out with 🤣
Absolutely loved listening to this Alexis is so funny and when you get to within an hour of the end don’t say I hadn’t warned you .
It was good to hear Anna and her grandparents mentioned from book one . Alexis has a rapport with young children and her interaction with the girl who comes in with her mummy to ask for Alexis’s help is so cute and funny.
I’ve already started book 3 and I’m looking forward to Kelley recording book 4 then I suppose I’ll be sad that’s the last book . unless the author decides we can all do with more Alexis Silver 🧜🏾‍♀️🧜🏾‍♀️🧜🏾‍♀️🧜🏾‍♀️ 4 just isn’t enough.


Loved it!
Such a good book and really enjoyed the humour in it as well!
I fell in love with Alexis in the first book And my love for her has only grown in the second book! the fact that she is strong and not perfect makes her even more likeable.
The narrators voice is lovely and clear super easy to listen to, it also fitted the main character very well.
I was given this free review copy audiobook at my request and have voluntarily left this review.
I still recommend it as it was really good book!

I find this series a good easy listen too which is good. The narration was good and I liked her voice. I enjoyed the adventure in this book and the continual relationship building between characters. Its always good to have room for growth if there is more than 1 book.