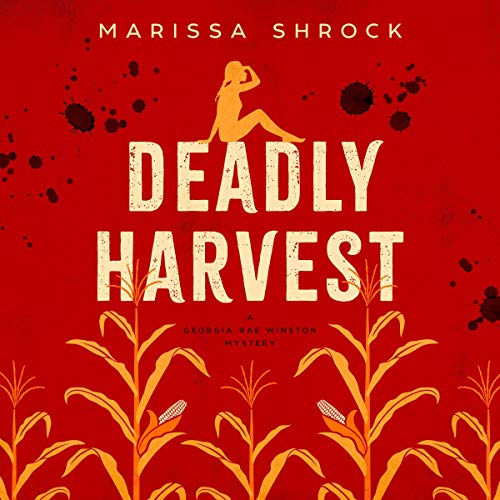 All Georgia Rae Winston wants is to fall in love. Life, of course, has other plans.

Georgia’s biggest challenge in the farming town of Wildcat Springs, Indiana, is figuring out how to win Evan Beckworth’s heart. Until the day she discovers the body of a former student in the woods.

She assumes it was an accident. When she starts to suspect it wasn’t, it stirs memories of her father’s murder nine years earlier. A murder never solved. Georgia refuses to let that happen this time.

Not necessarily the wisest decision.

As Georgia works with the sheriff’s department’s newest detective, Cal Perkins, she finds her heart slipping into his hands. But her head is pummeled with conflicting evidence and anonymous threats of severe consequences if she digs any deeper.

In the end, Georgia faces a paralyzing choice. Ignore the dark secrets inside the family and friends who surround her, or be willing to risk her own life to uncover the truth.

I found this audiobook to be a very good listen. It has a great combination of history, murder and suspense. The narrator does a very good job of reading each character and bringing them to life.

This is a well written clean christian cozy mystery. The story has action, adventure, twists, mystery and a bit of suspense. The characters are well developed, although a bit slow to become their ages but they get there. This is definitely a religious heavy story that one of these days I'll check category as well as read the blurb before asking for a code. :) The narration was wonderfully done by Jennifer Jill Araya. She gave each character their own voice and emotions. She really knows how to bring a story to life and was the main reason I continued listening until the end. If you enjoy clean christian cozy mysteries then this one will be right up your ally.

This was the first book i have read by this author. Found the book very entertaining and well written. The characters were well developed and lovable. I definitely would do more in this series. The narrator did a great job. I was gifted this book at my request and left a voluntary review.

This is a great Christian cozy mystery. There is quite of bit of suspense and several well-placed red herrings. The characters are realistic although at first, I found a few of the characters a little immature for their ages. As the story progressed the characters seemed to mature and work out their differences. The storyline was entertaining and well developed.

I listened to the audio version of this book. Narrator Jennifer Jill Araya does a wonderful job of giving each character a voice and bring the story to life. I had no problem knowing which character was which. Her voice acting draws the listener in and is an asset to this book.

I received a copy of this book at my request, and I have voluntarily left this review. All thoughts and opinions are my own and in no way have been influenced.

Farming, Faith, Friends and a Fatality

Georgia Rae Winston is a farmer, along with her grandad. She harvests the fields on their Indiana farm, thankful for her air-conditioned tractor, and glad she didn’t end up a music teacher, as she had once planned. After her father’s murder, nine years earlier, and her brother’s choice to become an accountant instead of a farmer, Georgia Rae, stepped in to her role as family farmer, alongside her grandad, without regrets. Nearing thirty years old, her only wish is to find the right man to share her life with. But for some reason, she hadn’t been so blessed in the love department. With most of her friends married already and some with children, Georgia Rae felt left behind sometimes. Her weekly Bible Study group rotated between the homes of the group members, and she had been smitten with Evan Beckworth for quite a while. That is, until he brought a new girl to their Bible Study, who was “perfect” for him. When Georgia Rae finds a dead body at the edge of the field she is working in, she can’t help but to want to investigate. This story is a clean, sweet tale of young adults trying to figure out God’s plan for their lives, as well as a murder mystery. I appreciate these kinds of books and hope that there are more in the series soon. The next one isn’t yet out on Audible. The characters in the book are honest, real and most importantly, not depicted as holier than thou. There are funny parts, sad parts and I was overall very fulfilled with the story and the resolution.

This was a great start to a new Midwest cozy series! Georgia is a farmer in Wildcat Springs, IN who is trying to follow God’s will while trying to find the right guy for her since it doesn’t seem to be her best friend, Evan. She discovers the body of a student she had years ago on her farm and everyone thinks it was a hunting accident until the evidence points to homicide. Georgia is determined to find her murderer since she was never able to find her father’s and against her family and friend’s wishes for her to stop, she keeps digging deeper and deeper even after threats have been made. I found Georgia’s character, along with most of the rest very realistic and relatable, with their every day problems, wavering faith, and miscommunication. The little town of Wildcat Springs was your regular small farming town where everyone knows everyone and they’re a tight knit community of multiple generations. Some of the relationships in the book seemed like it was built for teenagers instead of people in their 20’s-30’s, but it flowed nicely with the story and hope to see more of Georgia and Cal’s. I can’t wait to continue this series to see if she ever finds out who her dad’s killer was. This book was filled with mystery, multiple suspects, twists and turns, romance, and tons of prayer.
Jennifer did another fantastic job with this narration! She uses different voices for each character and keeps you hooked from start to finish. I love the way she can bring every character and suspenseful moment to life!
*I was given this free review copy audiobook at my request and have voluntarily left this review.

Marissa Shrock is a new author to me although I have listened to a few books from narrator Jennifer Jill Araya before. I enjoyed this clean, Christian cozy mystery and would be happy to listen to more in the series. I don’t often listen to Christian books but I found that the suspense and mystery was so good that I was not fixated on that aspect of the story.

I liked Georgia Rae Winston and her band of friends as I found them easy to relate. Detective Cal Perkins certainly caught my eye as he tried to keep Georgia Rae safe whilst trying to solve the case.

I enjoyed this book from start to finish. It’s a cozy mystery and one that I found thoroughly entertaining. There are many twists, turns and surprises in Deadly Harvest as Georgia Rae and her band of friends follow the clues and I have to say that I was taken by surprise on a couple of occasions.

The narrator did a fabulous job and certainly kept me entertained. This was a a book filled with secrets, miss communication and clues to satisfy my detective spirit. The intrigue and suspense kept me on the edge of my seat as I listened to this story.

I was given a copy of this audio book from the narrator and have voluntarily left this review.

This is a really good cozy mystery. It's got all the great things a sleuthing story should have. The narrator did an amazing job and kept me interested in the story. I actually didn't figure out who the killer was till about a minute before they were revealed. I was given this free review copy audiobook at my request and have voluntarily left this review.

I enjoyed Deadly Harvest, it is a sweet story with touches of romance and a bit of suspense woven in for good measure.

Marissa Shrock has created a likable cast of characters who are real, living everyday life. Georgia is a farmer, who is insecure and bold at the same time. Coming upon a dead body while combining, Georgia's life gets a bit more complicated. Add meddling friends, a bad date, a sheriff, and an unrequited love and you have a good story.

Jennifer Jill Araya narrates the story well, drawing you in.

"I was given this free review copy audiobook at my request and have voluntarily left this review."

Excellent well written murder mystery novel that will keep you listening to solve the surprise ending. Narrator interpretation is excellent reading with passion and expression that makes listening a pleasurable experience. The descriptive but not graphic text makes this book suitable for anyone interested is an excellent mystery series.