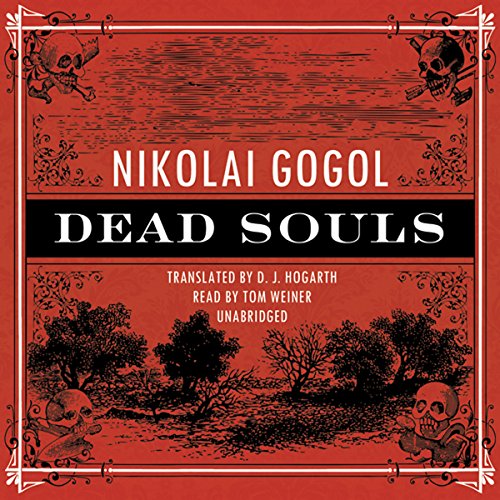 "One of the world's finest satires...." ( Merriam Webster's Encyclopedia of Literature)

Regarded as the first great masterpiece of Russian literature, Dead Souls mixes realism and symbolism for a vivid and highly original portrait of Russian life.

Chichikov, a mysterious stranger, arrives in a provincial town with a bizarre but seductive proposition for local landowners. He proposes to buy the names of their serfs who have died but who are still registered on the census, saving their owners from paying tax on them. But what collateral will Chichikov receive for these "souls"?

"Dead Souls" is a wonderful book. It has all the wit and linguistic dexterity of Dickens, and still is utterly and completely Russian. The elusive "Russian spirit" is on every page. Truly a masterpiece, presented here in a very good translation. The reader does an excellent job, too; his voices do slip here and there, but never for more than a second or two.

There is, however, one thing to note about this audiobook: Gogol intended this to be a three-volume work. In his lifetime, he only published the first volume. He apparently wrote some of the second part, but then burned it. Now, it seems that some fragments of this second part have survived, and these are included in the audiobook. Listening to that half of the audiobook isn't really enjoyable: every time you start to follow the plot, the narrator says "at this point there is a long hiatus in the original" and jumps off to a much later part of the story, complete with new and unfamiliar characters and full of references to events you have no knowledge of. I think the audiobook would have been better without this rather pointless second part, and would recommend stopping after the first.

Firstly, this is a serviceable translation of Gogol's masterwork, and narrator Tom Weiner does a better than average job of bringing the novel to life (though somehow his imperious tone doesn't quite suit the text). But this is NOT an Unabridged reading of Dead Souls. The edited text is missing somewhere between 8-10% of Gogol's prose, mostly big chunks of descriptive exposition and digressive ruminations on the writer's life as it relates to Russian society. These excisions allow the plot to lurch forward more briskly, but Gogol has much more to offer than plot. I am deeply annoyed at the Audible editors who didn't take the time to realize this. Given all the unemployed Ph.Ds out there, the company should consider hiring experts in specific fields of literature as editors to ensure this type of false advertisement doesn't happen again. P.S. When I initially download the book two weeks ago, the thumbnail they used was of the Vintage Classics edition, translated by the great Pevear and Volokhonsky. This has since been revised, but further adds to the unreliability of the Audible marketers when it comes to disclosing to the customer exactly what they're getting. It's only fair to close by saying I've downloaded dozens of Audible titles over the years, and this is the first time I've had grounds for complaint.

It is too bad more people don't read/listen to Gogol, they don't know what they are missing.

I won't deny Dead Souls has literary merit and thematic depth. It's hard for me to judge the prose since I've learned to mistrust translations. But I have a hard time getting into Russian literature — I have yet to discover the Russian novel or author who really "speaks" to me — and Gogol didn't really seem to know where he was going with Dead Souls, only what he wanted to do when he got there. As Peter Boxall says in the aforementioned 1001 Books You Must Read Before You Die:

"The writing of Dead Souls drove Gogol mad. It started off as a humorous idea for a story, the conceit being that Chichikov, a scheming opportunist, would travel through Russia buying up the rights to dead serfs (souls), who had not yet been purged from the census and could therefore - like all chattels - still be mortgaged. As the novel grew, so did Gogol's aspirations; his goal became no less than to rekindle the noble yet dormant core of the Russian people, to transform the troubled social and economic landscape of Russia into the gleaming great Empire that was its destiny. He no longer wanted to write about Russia; he wanted to save it. He was driven into messianic obsession and, having burnt Part Two - twice - after ten years of labor, he committed suicide by starvation."

That's one of the problems with Dead Souls: on a purely novelistic level, it's incomplete. Gogol planned for it to be a sweeping three-part epic, and the fragment that is left is quite literally unfinished, with missing parts even before the end. So we never do see what comes of Chichikov's scheme. The novel ends in the middle of a long sententious speech about corruption by a Russian prince.

That Gogol was long and rambly had a point he wanted to make is obvious in this book. We can see an author who loved his country, who, as Jane Smiley says in 13 Ways of Looking at the Novel:

"Like many Russian writers, Gogol employed his gifts in trying to discern the nature of Russianness and in forging a literary identity for Russia that would somehow help to engender a road to the future."

Thus, Dead Souls is a book about "Russianness" as much as it is a story about Chichikov, an amoral huckster who conceives a scheme to become rich by buying dead souls from credulous, venal landowners.

Chichikov is a character, and Gogol's treatment of Russian peasantry and the upper classes alike is sharply satirical. Gogol seems to have a sense of humor, unlike Tolstoy and Dostoevsky. At the same time, he's still writing a Tolstoy-like ponderous Russian Epic (even if Dead Souls' unfinished state leaves it somewhat less ponderous in size), and so between Chichikov's misadventures and a host of other Dickensian characters, we get rambling monologues about details of Russian life and the Russian character. In the middle of Chichikov's travels, the author stops to digress for a long, prolix paragraph about highways.

This may be to your taste, but being a story kind of guy, I wanted to find out what was going to come of Chichikov's schemes. I am less concerned with Gogol's concerns about the character of a long-ago nation, even if today's Russia, after revolutions and Sovietizations and fragmentation and Internetoligarchization does sometimes seem not so far removed from the Russia of Gogol and Tolstoy and Dostoevsky.

Well, this review did make me ramble a bit, didn't it? I guess I still can't quite put my finger on why Dead Souls fell flat for me, and given that it made me think so hard and dig up so many quotes, I guess it does what all excellent books are supposed to do, which is stir thoughts and conflict in the reader's mind. I'm still only giving it 3 stars, because it's just so boring for long stretches, and it's an unfinished novel, but if you are into classic Russian lit, or want to try some from the "second-stringers" (i.e., not Tolstoy or Dostoevsky), Dead Souls has humor and wit and the premise intrigues if the delivery is ultimately unsatisfactory.

Dead Souls was recommended to me as a classic of Russian Literature. The story is interesting, and contains excellent characterisation as well as evoking the richness of Russian society and exploring philosopical and moral issues.

The reading is good; the male narrator has an American accent. His tone and reading help bring the story to life. Personally I would prefer a reading with a British or Russian accent. However, it is pleasing to have this classic novel available as an audiobook, so I shouldn't be too picky!

I like to follow the audiobook with the text version (downloaded from Project Gutenberg on my Ipod). The chapter numbers did not exactly correspond with the book, had they done so it would have made my task easier.

Overall, worth buying and listening too.

What disappointed you about Dead Souls?

I persisted with this book beyond the call of duty, through tortuous prose, seeing it through to the end - or at least what passed for the end: it finishes mid sentence, followed by the reader's note: "here the manuscript of the original comes to an abrupt end". There had been some missing pages acknowledged previously and a few places where it felt as though the plotline skipped forwards, breaking up the storyline – or maybe I nodded off, having failed to maintain my level of engagement – and the only thing I can say that is positive about this Audiobook is that it saved me having to read it.

What could Nikolai Vasilievich Gogol have done to make this a more enjoyable book for you?

If he'd finished it, it would have helped. Or on the basis that he had, that the translator had translated a complete copy. Having enjoyed Gogol's short stories and some interpretations of longer ones, I will stick to those in future.

He made a decent fist of it, but his voice was too monotone and the delivery was relentless, lacking emphasis or dramatic pauses.

Other than saving me from having to read it, and confirming that I am more tenacious than is good for me, no. I should have returned it within the first hour, having failed to engage with it, and I feel robbed.

If this was a translation of the only remaining copy of the book, then I would question its validity as a competed work - let alone an unabridged one. If there are complete editions, to have translated and portrayed this as the unabridged work is a misrepresentation. None of the storylines reach any conclusion and I should have spent those 12 hours more constructively.