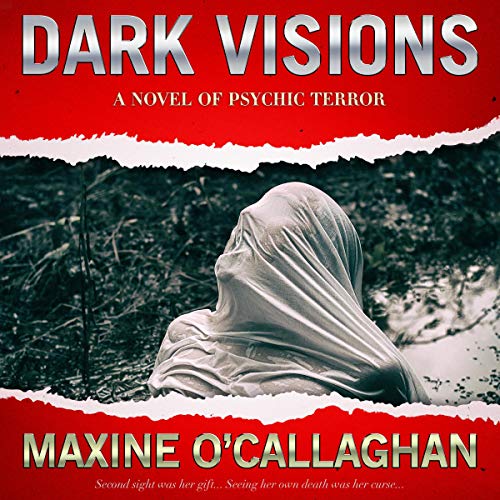 Mitch always had the power...or the curse. It had been passed down in her family tree, generation to generation.

No matter how far away she ran, the unwanted visions of killing filled her mind. She felt the victim’s terror, the terrible pain of the stabbing knife.

Unable to banish what she has seen, Mitch goes to the police.

The murderer knows that Mitch’s gift is real.

The next death Mitch sees will be her own.

Dark Visions is the perfect name for this book. The book is creepy, dark, fast paced fun. The narrator Freddy Moyano is absolutely perfect with his voices he draws you in and doesn't let you go. The storyline is well written and strong. The characters are well developed. The story flows at a great pace I just hope this book does not give me nightmares. I received this audio book upon my request and it comes highly recommended if you love a good twisted tale like me. I leave this honest review of my own volition.

good some twists a nice Spanish lean i think

just spooky enough to keep it from going to far out their. different narration, nice. nice lead girl. went quick.
i got a free copy some how. tks

There is lots of it in this one. Overall I enjoyed this book quite a bit. Though I found the narration to be problematic in a few ways. I really liked Freddy Moyano's voice, it has an interesting whispery quality that I found interesting. That said, his accent didn't seem to fit with the setting and more importantly, even if it did, all of the characters had the same accent... so it was very difficult to distinguish between them a lot of the time. I think the writing may have contributed to this as well - I think the same characters were referred to in different ways (first and last names) and some of the names sounded similar enough to others to the point where I really didn't know who was speaking much of the time. It wasn't a bad book at all, but I don't think I would recommend it to any friends.

This story is about a young woman who can see pending deaths of people around her. When she went to the police. They thought she was a wacko. But one detective decided to give her a chance. And found he could actually care about the young beautiful woman.


Now for the narrative. Freddy did a great job using different voices. The slow soft voice takes a little to get used to, but then I realized that he was putting the emotions of the main character into the voice. I enjoyed listening this story, and would recommend it to anyone who loves a good psychic murder mystery

This may be a good book, but the audiobook sucks.

As far as an audio book, this is terrible. the story may be okay, but I won't ever know, unless I read the book. I received this code for free, in return for an honest review. I got a message from the narrator asking me not to review it, unless I could give it a 5 star review, because he had been working on it for 5 months and has had enough negative reviews. I told him I only give honest reviews. I was between books, so I decided to listen to this one. I listened for 45 minutes and had no clue what was going on. I started it again and listened for 20 minutes. I finally gave up. This may be a wonderful book, but the audiobook is terrible. I have never heard a worse narrator of audiobooks. This was ridiculously bad. I am not just giving this review because the narrator didn't want anything but 5 star reviews. It's impossible to listen to this though. I tried. Twice!

This is a fantastic thriller. It grabbed me and kept me on the edge of my seat. I like how it was told in different characters point of view as well. The storyline flowed great. I love these type of reads because its like putting a puzzle together. The Narrator done a fantastic job as well. The Characters came alive and your could hear there emotions. I definitely recommend.
Shauna Joesten

I’ve heard other audio books before, but they don’t hit home unless I have a beautiful voice to listen to. That’s why your audio books keep me tuned in. I love hearing the change in voice when you hit different dialogues. Beautiful voice and a good reading/listening pace. Bravo.

I really enjoyed Dark Visions especially the ending. The narrator did a great job on the female character Mitch. I thought he did an excellent job going into the male voice(tone) from a female voice(tone). I would recommend this novel to anyone who likes psychological thrillers.

I've listened to many books and i thought this narrator did an awesome job! I saw some reviews about his accent but i thought the accent is what made it even more interesting. All together i would highly recommend you listen to this


I have put this off long enough.I tried to listen to this book three times.I could not understand what the book was about and narration by Freddy Moyano was horrible.Having recieved a notice ;'There is no need of any review with text unless it is 5 star one. If you don't feel it is 5 star worthy, then no need to enter a review. If you put a five star review and comment your favorite character voice was in the audiobook, I will offer you an appreciation code towards ANY audiobook of your choice.'and then there was the blurb"It takes 5 months to put one of these together between narration and editing. Some folks know I am a popular actor around here and they go in to damage with reviews.' which just put me off listening to any book for a bit.I was given this free review copy audiobook at my request and have voluntarily left this review.

No matter how far away she ran, the unwanted visions of killing filled her mind. She felt the victim’s terror, the terrible pain of the stabbing knife.
good book can't wait for book 2

Imagine Seeing Your Own Murder.

A very atmospheric crime fiction novel with a scary twist. Seeing murders is a huge inherited burden for our central character. Eventually she goes to the police, for the first time, to unburden her latest vision but her problems become entangled in the killers twisted plans. The plot twists and turns in this tense thriller. The narrator, at first was a distraction, but soon added to the sense of tension. An enjoyable listen.

This audio book is a good book to listen to. The story line kept you on the edge of your seat with the many twists and turns. Numerous tense moments. Good narration.