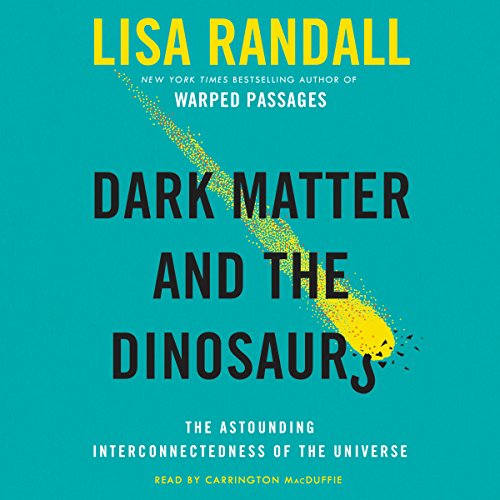 Dark Matter and the Dinosaurs

In this brilliant exploration of our cosmic environment, the renowned particle physicist and New York Times best-selling author of Warped Passages and Knocking on Heaven's Door uses her research into dark matter to illuminate the startling connections between the furthest reaches of space and life here on Earth.

Sixty-six million years ago, an object the size of a city descended from space to crash into Earth, creating a devastating cataclysm that killed off the dinosaurs, along with three-quarters of the other species on the planet. What was its origin? In Dark Matter and the Dinosaurs, Lisa Randall proposes it was a comet that was dislodged from its orbit as the solar system passed through a disk of dark matter embedded in the Milky Way. In a sense it might have been dark matter that killed the dinosaurs.

Working through the background and consequences of this proposal, Randall shares with us the latest findings - established and speculative - regarding the nature and role of dark matter and the origin of the universe, our galaxy, our solar system, and life, along with the process by which scientists explore new concepts. In Dark Matter and the Dinosaurs, Randall tells a breathtaking story that weaves together the cosmos' history and our own, illuminating the deep relationships that are critical to our world and the astonishing beauty inherent in the most familiar things.

SOME LIGHT ON DARK MATTER

This book isn't for the faint hearted, it is a true academic enterprise. Fortunately the author presents the topic in language appropriate to a non-scientist. Still the listener may have difficulty wading through the data from which the conclusions are drawn. I got the book after listening to an interview with the author on NPR. Not for everyone, but it will bring some revealing light to dark matter.

remarkable book with a caveat

A lot of good inter-disciplinary science information; if you are up-to-date in the study of geological extinction events, solar system dynamics and other astrophysics, and to a lesser degree particle physics this may not be the book for you, or you may want to skip to the end. The idea the author is trying to relate is that a disc of dark matter could influence long period comet events and explain a cycle detected in their arrivals on earth and explain other astronomical details.

In order to describe how this could happen, the reader has to be brought up-to-date on the disciplines needed to understand why this idea makes sense. The author does a stellar job at making the science approachable. I learned much about many science fields listening to this book.

Whether the core idea is abandoned or refined with future data, this book was a good investment in time for the learning involved.

“What is the speed of dark?”

“What is the speed of dark?”
- Lisa Randall, Dark Matter

Lisa Randall is smart. But she is also able to take topics that most people know very little about (dark matter, dark energy, etc) and translate the hard science into books for the unwashed masses. She's good. I believe part of what makes Randall one of a handful of our country's great public intellectuals is her ability to translate and to transfer her specialized knoweldge into books that are largely accesssable to the layman. Also, she is curious. Part of what makes her a phenominal scientist and not just a very good one, is her curiosity beyond her specialized career. She is a theoretical physicist, a cosmologists, a model builder who works well with other theoretical particle physicists and cosmologists. But she doesn't stop there. She is curious about biology, evolution, geology, politics, art, literature, etc. She is a connector. She jumps into fields and links things that might have been easily missed. She sees a periodicity in large meteor hits, makes an argument that links those asteroids to dark matter and builds a model to explain it. She isn't easily kept inside a box.

Last year I was able to spend a couple days with her when my sister hosted her and some friends in Idaho for the totality. It was amazing to watch some basic standard physics (moon blocking the sun) with one of the most cited living physicists. I was literally in the dark with a dark matter expert.

At first with the book, I wasn't sure where she was going. She obviously needed to lay some basic groundwork about how the univeres was structured, what dark matter was, etc., but then she jumped into a discussion of meteors and comets, mass extinctions, and then we were back to discussing dark matter. But she pulled it off. She carefully laid the table to explain the contributions she made concerning dark matter. One of the things I loved about her writing was she was constantly reinforcing the importance of science, EVEN WHEN IT IS SHOWN LATER TO BE WRONG. Randall loves the idea of science more than even her own ideas. It is easy to adore someone who humbles themselves to the possibility of their theory being wrong, and uses that to further embrace the scientific method. I guess I'll let Lisa have the last work to summarize this book:

"This book is about the seemingly abstract stuff such as dark matter that I study, but it is also about the Earth’s relationships to its cosmic surroundings."

The only drawback of this Book is that it is too short. Lisa Randall explains her thinking and current Theories as well as The current State of Knowledge Up to The Last Two chapters in which she concludes The relationship Stated in The title. My only Dilemma After listening is to not be able to discuss other theories with her

This is an engaging and delightful listen for a person with a real curiosity about the universe and our rapidly evolving understanding of if. Though it necessarily remains in the qualitative realm, a detailed picture and story unfolds which helped me feel connected with a branch of scientific knowledge which I have felt was too abstract for a non-physicist to grasp. My only problem was being unable to find the "enhanced" material through the audible website.

Seminal work in this area

My first review was deleted by Audible because they don't allow links to videos. But, feel free to look up Randall's newest video. It's about 5 minutes and incredibly clear.

Randall is the first to warn her reader that her new hypothesis is speculative and in need of more testing. However, she is excited about the kinds of questions this new direction is taking her. Randall has been investigating how dark matter might be involved in not only the creation of matter itself, but possibly in the evolution of humans as well. The presence of dark matter is not at all speculative. It has been detected using a variety of tools and methods. What is speculative is the notion that some dark matter might interact with itself. Just as ordinary matter comes in different varieties (different sizes, charges, etc) dark matter too might come in different varieties, some of which might not make a halo, but rather a dense disc that cuts through the the Milky Way and provides an extra gravitational force that might throw a comet off its trajectory and allow it to plunge toward and into earth, thus changing the temperature and atmosphere of Earth.

Randall has a mixed style of writing. At times she makes analogies that are so fantastic, they seem among the best I have read. At times though, her writing is dry. For example, I found the chapter on Cuvier (who I actually love) and catastrophe to be so dry, I had trouble paying attention. But, her chapters on the structure of the universe-- how matter was formed, how matter collapses into a disc, how clumping follows the rich get richer power laws,how heavy elements actually help in cooling so that large objects like our sun can form, etc-- were actually page turners for me. I reread some of those sections more than once because they were so exciting.

One of my favorite parts of the book was her discussion of Occam's Razor. She prosed a table setting around core function. It was brilliant. Also wonderful, she treated her reader to a version of human's are not special that went way beyond most things associated with the Copernican revolution. She suggested that matter, everything we have ever seen in the universe, is not special. So great to be reminded of that. I actually laughed audibly while reading that section.

I cannot wait to see what the telescope Gaia finds. Of course I am hoping it will support Randall and Reece's hypothesis. If it does not, I am still excited to continue hearing about the questions that continue to drive Randall's work.

I loved this book. the author used everyday analogies and humor to make this difficult subject matter accessible. this book was riveting!

If you could sum up Dark Matter and the Dinosaurs in three words, what would they be?

What was one of the most memorable moments of Dark Matter and the Dinosaurs?

When I realized this was a real scientist explaining real research - the history and foundations of dark matter; the scientific method applied; the evaluation of the available data; the story of how the ideas explained in this book evolved in her thinking and in her work with other collaborators.

Have you listened to any of Carrington MacDuffie’s other performances before? How does this one compare?

No. Too much to digest all at once.

Especially liked the manner in which she attributed credit to all the cited researchers whose work contributed to the present views.

Not a multi tasking kind of listen for the laymen.

I think I would have enjoyed this particular listen much more in book format. Not a multi tasking kind of listen for the laymen.

I knew about dark matter and its gravitational influence on ordinary matter, but I thought dark matter could only exist in any measureable quantity outside our galaxy. But now I know that pockets of dense dark matter could exist inside our galaxy which can perturbe the Oort Cloud sending comets into our inner solar system. It's a little more complicated than this, other factors contribute as well, but if you listen to this audio book, you'll discover that dark matter is more than just scaffolding.