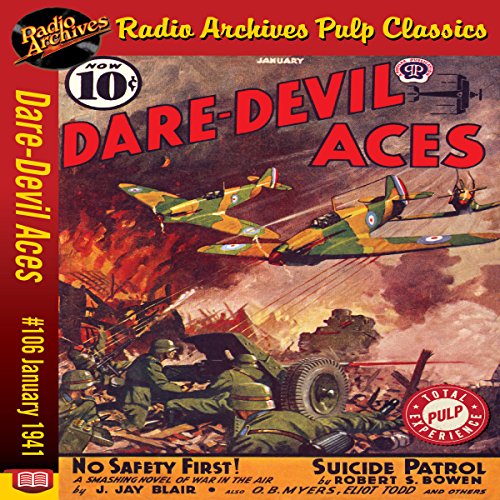 Total pulp experience. These exciting pulp adventures feature every story, every editorial, and every column of the original pulp magazine.

Dare-Devil Aces was another of the many pulps that rode the wave of popularity of World War I aviation tales in the decade after the conflict. It made its debut in February 1932 and lasted for an astounding 135 issues. It finally closed after World War II ended, with the November 1946 issue. During its run, it presented a wide assortment of high-flying aerial series, including The Red Falcon, The Vanished Legion, The Three Mosquitoes, Molloy and McNamara, The Black Sheep of Belogue, The Mongol Ace, Chinese Brady, Captain Babyface, Smoke Wade, and others.

Strap on your flying helmet, toss that scarf about your neck, and get ready for some soaring action in the skies over France and Germany during the Great War. Dare-Devil Aces returns in vintage pulp tales, reissued for today’s listeners in electronic format.

"Wings Of Tomorrow" - An editorial

"No Safety First" - Gripping novel of war in the sky
by J. Jay Blair
...where the careless die first, the brave die hardest - and the password is: “No safety first!”

"Round Trip To Hell" - Gripping novel of war skies
by Daniel Winters
Patriotism never exacted a greater toll from any man than Harry Bogart of the R.A.F., whose fate it was to command a ruthless Dornier-bomber raid - over London!

"Death Has No Wings" - (Part 5 of 5)
by O. B. Myers
The fifth and final chapter of facts turned to fiction, the most soul-stirring event of all time - the actual invasion of England.

"Suicide Patrol" - Smashing air story
by Robert Sidney Bowen
A stolen plane, an outcast war-bird, and a grim-faced man facing the dreadful alternative of watching his squadron fly out to certain doom - or blasting them from the skies with his own guns!

"Man O’ War" - Thrilling war feature
by Eliot Todd
They told Pop Briggan that flying was a young man’s job - but he showed them there’s no age limit on courage - even on the ceiling of hell!

"Story Behind The Cover" - A department
by Frederick Blakeslee

"The Hot Air Club" - A department
Conducted by Nosedive Ginsburg
Sense and nonsense - and Nosedive supplying the hot air.