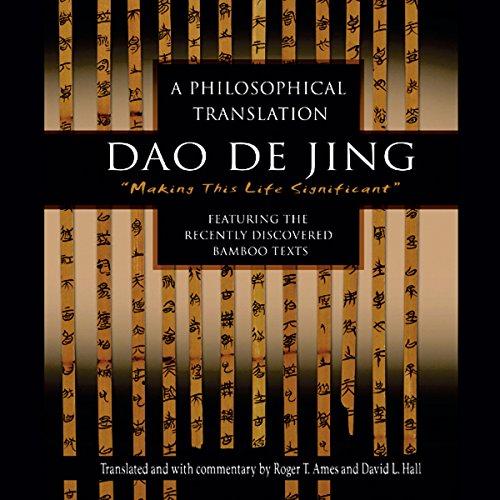 Composed more than 2,000 years ago, the Dao de jing (Tao Te Ching) set forth an alternative vision of reality in a world torn apart by violence and betrayal. Second only to the Bible, this timeless classic is one of the world's most revered inspirational books. Daoism offers a comprehensive view of experience grounded in a full understanding of the wonders hidden in the ordinary. Now in this luminous new translation, Chinese scholars Ames and Hall bring the timeless wisdom of the Dao de jing into our contemporary world.
©2003 Roger T. Ames and David L. Hall (P)2007 BBC Audiobooks America
東洋 道教 哲学
続きを読む 一部表示

The critical reviews are missing the point

Several reviews of this audiobook criticize the fact that most of this book consists of prose commentary. Some reviews criticize the translation. Both are missing the point. The philosophical commentary *IS* the book. The commentary proposes that the Dao de Jing expresses a coherent, nuanced, and valuable cosmological and metaphysical vision. The translation attempts to make this philosophical vision comprehensible. If you are more interested in considering the Dao de Jing PURELY as a poem, and you are exclusively concerned with the "flow" of the translation (the number of syllables and how well it rhymes) then choose another translation - or better yet, go read a nursery rhyme. If you want to approach the Dao de Jing as a nuanced, complex, condensed, crystalized philosophical vision, then understand that unpacking that vision may require some technical language, and translating that vision in a CONCEPTUALLY accurate manner might not read like Dr. Seuss. If that sounds interesting, ignore the baseless criticisms and get this book.

Unless you are a sinologist

I am fluent in modern Chinese, but the narrator's pronouciation is so awful that I couldn't understand what he was saying without going back to the ancient original. This translation also suffers from too many commentaries, two hours introduction and 81 commentary made this book very unwieldly, the philosophical translation (or rather, philosophical commentaries) also render this edition arcane at best, but if you are a sinologist, I think this book will still be of interest to you.

best self help book EVER!

It seems that 2400- 2600 years ago there was a lot of thinking going on. Socrates. Siddhartha, and Lao Tzu. and all of it so applicable today that it seems fresh. and matured.

This audio recording could really use some bookmarks. There are 81 chapters to the Dao De Jing, and it's very difficult to find the specific chapter you are looking for. The actual chapter splits seem to be random, and unconcerned about whether they split at an actual chapter, or even in the middle of the commentary. It would actually be much more useful, and less confusing, if there were a new chapter or a bookmark for each chapter from the book.

Definitely a great read that sheds light on many of the otherwise vague passages in the Dao.

Dear heavens, what a train wreck

If this were a meal, it would be a chicken, boiled until all flavor is lost and poured down the drain.

I have many translations of the Tao Te Ching. Every new translation usually brings some wonderful contribution to the experience, but I have yet to discover what the contribution here is.

I usually enjoy insightful commentary on the text many translations offer. I love the glimpses of cultural insight and explanations many translations and commentaries provide. This reads like an academic treatment that was refused for publication by philosophical journals.

The translation is ineloquent and sterile. The commentary is pretentious and haughty. It takes more than three hours of self-congratulatory introduction before the translation even begins.

Even in translation, it's clear from the whole of available translations the Tao Te Ching is a work of eloquence and beauty. Alas, neither has managed to survive this edition.

Great commentary, love experiencing different views and expressions of this text. if you enjoy learning about the Tao, you will enjoy this book.

Perfect if you want to explore the text as much as you can. Only complaint is how the audiobook chapters are structured seems odd with how the actual book is structured.

as good as it gets

thorough analysis and explanation, allow a reader used to western philosophy to approach the Dao De Jing in the right way, answer some questions and explained why others have to remain unanswered or rather, explain which one are the correct ones to ask

If you are going to buy this bear in mind that it doesn't get into the Dao itself until half way through the recording. The first half is taken up by all the explanation about the translation and the justification behind their interpretation. I understand the complexity of translating something like the Dao De Jing but it was a little confusing listening to a 4 hour introduction. Several times I wasn't sure whether they had actually started talking about the Dao but they hadn't so bear this in mind. If you want to get straight into it, skip to part 4.

Nice addition to my library of spiritual material.

Lots to work on as this is a practicable text not just to listen but I have to admit I am having to use the internet for defining some of the English words used in the translation. They go a way into explaining the chapters with commentary notes.

The Dao that can be told is not the authentic Dao

its a bit confusing probably worth getting in print.
I read it once and I'm going back to it to study individual verses but I can't find the beginning of the translation..
a good introduction to eastern cosmology

This is simply Epicureanism sprinkled with eastern spice. Lots of jargon amounting to not much.

The use of language to analyse the texts can take a little getting used to, however the philosophical message of the Dao De Jing is well conveyed.

Very impressed with this work. Wonderfully in-depth commentary and translation. Great narration. The best I've found on audible as yet.

Erudite but too wordy in places

What did you like most about Dao de Jing?

The Dao de Jing is a classic piece of world literature. Translated many times by scholars with different agendas (in recent times New Age translations for instance) , with each translation bearing the hallmarks of the cultural or academic focus of the translator.

This translation claims to give the Dao de Jing a philosophical investigation, the authors being I believe professional philosophers of western origin who teach/ taught at Beijing University.

Much of the explanatory phrasing in the commentary sections is unnecessarily turbid and academic.... not at all accessible without multiple listenings. In their defence the translators do rephrase their sentences in different ways i.e. "In other words..." or "put another way....".

To sum up, unless one is supremely academically attuned, multiple listenings of this translation of the Dao de Jing would work best....and that this may not be such a bad thing... I just put it on when I'm driving long distance.


What was one of the most memorable moments of Dao de Jing?

The minnows swimming below the bridge on the How River.

Such an old text. Now with grave finds 500 years older than previous texts..but still with no punctuation marks, can we really get close to what the text is trying to say?