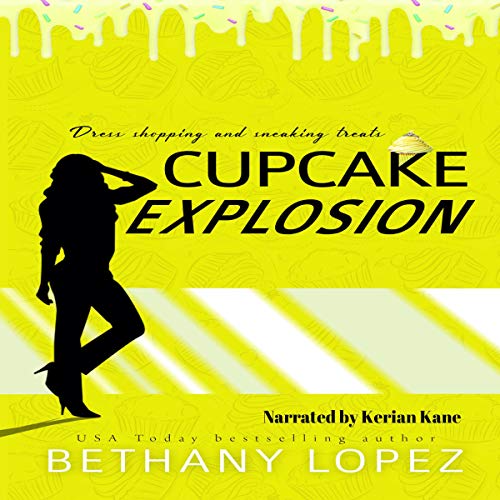 For the first time in a long time, life is good. I've got a smokin'-hot motorcycle man as my fiancé, the best friends a woman could have, a couple of great kids, and things have been relatively quiet on the PI front.

You know what that means...the other shoe was bound to drop sooner or later....

Just when I was ready to settle down and plan the coolest wedding Greenswood has ever seen, the shit hit the fan, and hit it hard.

My friends are fighting, Cade's been out of town doing God knows what for the club, and my sweet little twins are turning into hair-pulling preteens with more drama than my old daytime soaps.

I feel like I'm being pulled in a million directions, and I've been going so crazy that Elin's swear jar is near to overflowing. I've been eating cupcakes like a woman possessed, and if I'm not careful, there's going to be a cupcake explosion...in my pants.

Warning: This audiobook contains foul language, sex, some violence, and shenanigans. If none of that bothers you, grab a cupcake and listen on!

This was such a deeply touching and emotion ravishing story that I love so much! It reached inside me and laid claim to my heart before I even knew what would happen to these wonderful characters. Above all, I knew that I would enjoy this journey no matter how hard or how easy it got, and I was so right.. The storyline left me with bated breath as I watched these amazing characters find their way while loving and fighting the enter time. The strong and devoted family and friends left me in tears a few times at their deep love and appreciation of each other. Nothing was left to chance when it comes to the lives of those you love and cherish. Love, live, hope, and eat cake!

The narrator brought life and power to the captivating words of this powerful story. She made you feel even more, and made the journey that much more memorable. What a great performance! She highlighted the amazing creativity and immense power that this incredible author wields. I loved experiencing this story every step of the way.

I thought this was just an adorably sweet book! I gobbled it up in just one bite... err... evening I mean. So I haven't read or listened to the other books and I knew I was missing some goods... some fun inside jokes and whatnot. However, this was an adorable book by itself missing a bit or not. Delilah is wonderful and her friends are completely endearing and so likable. It makes me want to go back and listen to all the other books in the series.

The narrator, Kerian Kane was a great Delilah. She was pleasant and fun. I love it all mixed together... the fun and light with the sweet and charming. I would have enjoyed more... that's for sure!

Who knew one could eat so much cake?! This book is the most recent in the series, while adorable and hilarious this PI takes you on a rollercoaster ride with the Bride! This loving PI misses her fiancé and with Cade being unreachable the wedding planning and adventures come with lots of twists and turns....Narration is spot of with trying to keep everything tied together with all the feels! Recommend reading this series as it will leave you hungry for more!

Enjoyed this latest book in the series. While she is preparing for their wedding Cade goes off grid for his MC. Adventure with a twist is just around the corner for this cupcake loving PI.

I was captivated every moment of this audiobook!! The characters are constantly creating curiosity about where the next twist and turn will be. The relationships in the book are well described, and the narrator does an amazing job of tying it all together. Highly recommend!!

A perfect addition to this series with more problems to solve while planning a wedding at the same time! I loved this book just as much as the previous ones in this series ad can only hope there will be more in the future.

This is another great addition to this series and I absolutely love this series, Bethany Lopez did not disappoint

This was a pretty quick listen for me. We get to watch as Lila investigates a few cases as well as the case of her missing fiance. This author is new to me and this is the first book of hers that I have read/listened to and I like her style. It is a light romantic mystery but the characters are quirky and likeable. Since this is the 4th book of the series but the 1st I have listened to, I think that there are things that I wasn't able to fully grasp but there was enough background reminders that I was able to follow well enough. The book was intriguing and I enjoyed the author's style well enough to be interested in listening to the previous books.

I liked this narrator's performance a lot. I haven't listened to her before but I did keep thinking that she sounded very familiar to me. There wasn't a whole lot of emotion/acting in the performance, but it worked for this listen regardless.

I received a review copy at my request and have voluntarily left this unbiased review.

Absolutely loved the storyline. Who knew cupcakes were so cathartic. The story kept my interest completely throughout the book. The characters are constantly making you wonder where the next twist and turn will be. I only got to read/listen to this book and wonder what pleasantries I have missed in the previous books. I was given this free review copy audiobook at my request and have voluntarily left this review.

Kade and Lila are getting married...but a bit of PI work, Kade out of touch on MC business and Lila’s friends having things going on in their lives
A wonderful story...Is it done? Hard to tell, if it is it ended well, if not count me in
I received a free audiobook for an honest and voluntary review.

Easy to listen to. Relaxing but with more than enough exciting twists. Always fun to find out which adventures this lady PI will go on next!