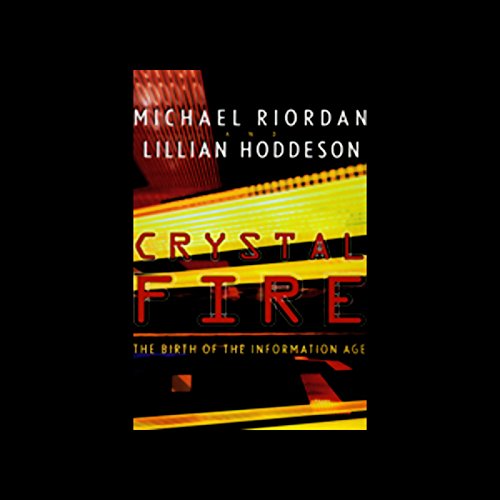 "Without the invention of the transistor, I'm quite sure that the PC would not exist as we know it today." Bill Gates, CEO, Microsoft Corporation.

On December 16, 1947, John Bardeen and Walter Brattain, physicists at Bell Laboratories, jabbed two electrodes into a sliver of germanium half an inch long. The electrical power coming out of that piece of germanium was 100 times stronger than what went in. In that moment the transistor was invented and the Information Age began. Crystal Fire recounts the story of the transistor team at Bell Labs headed up by William Shockley, who shared the Nobel Prize with Bardeen and Brattain. While his colleagues went on to other research, Shockley grew increasingly obsessed with the new gadget. Eventually he formed his own firm, the first semiconductor company in what would become Silicon Valley. Above all, Crystal Fire is a tale of the human factors in technology; the pride and jealousies coupled with scientific and economic aspiration that led to the creation of modern microelectronics and ignited the greatest technological explosion in history.

Better listen to the voice

This is a fascinating though technical story. Unfortunately, it is read by monotoned, plodding individual. I suggest listening to a sample of this guy because he makes a great story extremely tedious. It is probably better to read this material rather than to suffer the narator which is too bad. It really will interest a 45-55 computer or electrical engineer.

Interesting and not light on the science either!

This book is very interesting for anyone inclined to science. You dont have to by a physicist or mathemetician to appreciate it, yet it covered the actual science behind it as well.

Not only is it a good history book, but a good primer in understanding semi conductor mechanisms as because its historical, it also explains the discoveries in depth layer by layer.

After this book you will know the history, but also have a much better understanding of semi conductor physics.

A very good book on the history of technology

This book pulled out of the dustbin a critical piece of technological history that ultimately changed all of our lives in the IIH of the 20th century. The transistor. Not a physicist or scientist myself, I did find some passages to be heavy-going, realizing that I was not comprehending 100% of the technical information being imparted. But that seemed a small price to pay to find out the story itself, the personalities, the business aspects, and at least some % of the technical aspects. The reader is not the best ... a bit too much monotone for my taste. But OK.

Yes it has to be played in double speed but the time spent listening to this book was rewarding and enlightening.

For those studying electronics this is a must listen

Well researched and comprehensive history of the invention and development of the modern transistor which led to the creation of the semiconductor industry and the computer age. Focus is on the unique environment at Bell Labs immediately before, during, and after WWII, which supported and fostered both pure and applied research. The book paints a balanced, but largely unflattering, picture of William Shockley - one of the three Bell Labs scientists who won the Noble Prize in physics for the invention of the transistor. John Bardeen, who shared the prize, and later won another for his work on superconductivity at the University of Illinois, comes off much better. This book may contain far too much technical detail for the average reader, but it does a very good job of explaining how this technology evolved, spurred the formation of many companies that are now household names, and eventually migrated from Bell Labs in New Jersey, to Silicon Valley in California.

i learn english with my audiobooks here and this is the worst quality audible narrator, and seems to be a great book but not audio

I found this book to be very informative although I have worked in electronics design and repair for over 40 years. I believe anyone with basic electronic knowledge will enjoy reading this. Those with no knowledge may find the going a bit slow, but should learn a lot about a subject that now touches every life every day. This was a VERY good read.

The most boring thing I’ve ever heard.

This book goes off in so many different directions about every person that is mentioned that I could not follow. I understand giving a basic history of the people involved, but not to the extent that you don’t even remember why they’re talking about them in the first place. The reader’s way of reading is also as boring as it could get. I was trying to get a better understanding of transistors from this book, but I had trouble at times remembering what the book was supposed to be about.

For the one who works with computers and semiconductors, this books lets you see some of your roots. I needed to put my iPod on about 1.5X or 2X to bring the speed to where it did not seem plodding. The content was wonderful.

We learn of the men who helped bring us the transistor age. I liked to learn of Bardeen and Brattain. There are two of my heroes. Shockley was a very smart man, but he did not seem to enjoy his life. The book is written in such a way that you see the humanness of the characters. One also sees that it takes more than one person to solve a difficult problem. The genius' perspective is insufficient alone. Many people think a loner can solve any problem. Usually it takes many to actually solve the problem. Here we see the many.

The initial ideas on how the transistor worked were actually in error. Only over time, did the inventors understand what was occurring. They thought they had a surface device, but it was actually a bulk silicon device. Such insight is only gained in books like this.

I read technical papers as well. One learns why the initial papers were focused on the surface and not the bulk silicon. To learn a bit about those authors helps.

Innovation is a team sport. Too many people wonder why the genius cannot solve all problems alone. This book shows this clearly. The good team works. Any missing member hurts. Any lone member cannot solve the problem. It takes a team. The book shows this clearly as well. The loner may have a great idea, but cannot execute it. The team may have a wrong idea, but executes a workable solution.

The main characters are men. The women in the story are pushed a bit to the side, yet their impact is strong for those who will look and understand. There are many lessons to learn in watching people solve problems.

This was a great story; however, I played this audiobook on my Ipod at 2x the normal speed. The narrator spoke very slowly, so I'm not sure I could have listened to the entire book without the fast playback speed.

This will be a valuable listen if you are interested in the subject and can play the audio at a fast pace.

The narrator droned on with so little feeling that I gave up on what actually appears to be an interesting subject.Whatever you do,listen to the sample first.I didnt!