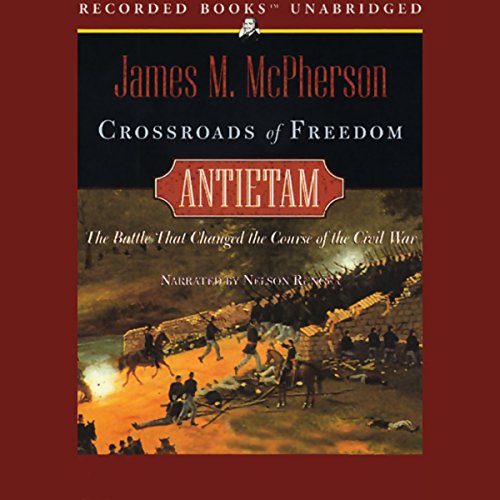 Through historical newspaper accounts and the personal letters of soldiers, the events leading up to the battle and the battle itself are stunningly recreated. You will enter the mind of Robert E. Lee as he makes the fateful decision to cross the Potomac River and take the offensive. You will feel the frustration of Abraham Lincoln as he struggles to convince George McClellan to fight. And you will stand side-by-side with foot soldiers as the peaceful Maryland countryside explodes into terrifying, unforgettable carnage. In vivid detail and with remarkable insight, McPherson makes a convincing case that Antietam was the "battle that changed the course of the Civil War."

The “Pivotal Moments in American History” series seeks to unite the old and the new history, combining the insights and techniques of recent historiography with the power of traditional narrative. Each title has a strong narrative arc with drama, irony, suspense, and – most importantly – great characters who embody the human dimension of historical events. The general editors of “Pivotal Moments” are not just historians; they are popular writers themselves, and, in two cases, Pulitzer Prize winners: David Hackett Fischer, James M. McPherson, and David Greenberg. We hope you like your American History served up with verve, wit, and an eye for the telling detail!

Far beyond the scope of the battle

This excellent book is not a standard battle history of Antietam (called Sharpsburg by the South) -- it is an excellent summary of the war to that point, and why the battle was so important in shaping issues beyond the battlefield. It examines examining the changing moods of both North and South up to that point, their changing expectations, what they were willing to put up with in terms of sacrifice and casualties. There is no sense of inevitability to the North's eventual victory here; the war was at midpoint and at the time a strategic draw. And although Antietam was the single bloodiest day in American history, while not to be ignored, this is hardly its significance. As a Union victory, it gave Lincoln the political capital to finally issue the Emancipation Proclamation freeing the slaves in the Southern states. This changed the war decisively, rendering it a battle for and against slavery that it hadn't explicitly been to that point. For this reason it also foreclosed the possibility of any European recognition of the South, which was quite eminent and perhaps the South's closest means of drawing the war to a close in its favor.

In addition to these strategic issues, McPherson is also quite good at drawing out several personalities involved in the battle. Lincoln's difficult balance in withholding his Emancipation Proclamation without some tangible Union success is explained thoroughly, some generals are described, various European reactions are explored -- but the character one remembers most is the ambivalent general of the Army of the Potomac, McClellan. It is an excellent study of failings and success in command, and failings and success in character.

If you are looking for a long and detailed analysis of the battle of Antietam then this is not the book. But I enjoyed the analysis of the early phases of the civil war and the crtical juncture Antietam was. The author does a nice job telling the story and even the ending provides yet another good summary of what happens after the battle.

What would have made Crossroads to Freedom better?

Focus on the subject!! If you were a novice to the Civil War, than this would be a good place to learn of the build up to this battle. To someone who already knows the basics and wants to know more about the Battle of Antietam, much more time should be spent on the Maryland campaign. This doesn't even get to 2nd Bull Run until more than halfway through the book, leaving only about 2 hours for Maryland!

Antietam in its Sociopolitical Constellation

Solid wave top narrative of the campaign and battle and the political environment it took place and its reverberations.

Poor narrator... The narrator was monotone and it put me to sleep.

If you’ve listened to books by James M. McPherson before, how does this one compare?

What character would you cut from Crossroads to Freedom?

Its a history book.

If you could sum up Crossroads to Freedom in three words, what would they be?

What was one of the most memorable moments of Crossroads to Freedom?

Would you listen to another book narrated by Nelson Runger?

Antietam is a tragedy. McClelland's lack of expertise and just plain old courage made this a tragedy.

I recommend this book.

Great way to help your kid with a project

Before this, I knew very little about the Civil War. I had no idea how close the North came to losing to the South. I must have slept through that portion of my schooling. My boy needed to do a project on the Civil War for his History class, and this book was a quick listen and learn about the war and this pivotal battle. I was able to listen to it while skiing down the slopes Up North, and come to his aid as he completed his project. The author, James MacPherson, is one of the most respected historians on the Civil War, and the information in this work is encyclopedic, but fascinating. The audiobook narrator kept it interesting and alive for me. No regrets at all.

I enjoy Civil War history and this book is no exception to the thorough study I would expect of this author. The reader is very good and the outline of the battle and surrounding events leading up to the engagement is well researched. I would recommend this to Civil War buffs and plan to read more by this same author.