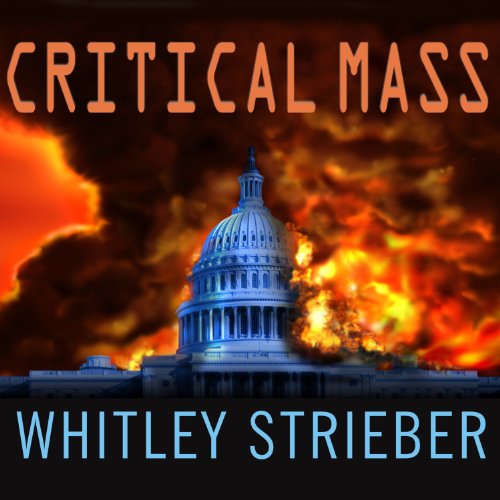 In Critical Mass, Whitley Strieber explores this unthinkable but real possibility in a furious story that is almost too terrifying to tell. Nuclear interdiction expert James Deutsch and his Muslim wife, Nabila, struggle to stop an impending nuclear attack on a great American city. Along the way, they delve deep into the hidden world of nuclear terrorism and the experts who strive to contain it, and get a compelling look at the titanic battle within Islam over its own future---fundamentalist and rejecting, or compassionate and life-embracing.

Like Strieber's classics Warday and The Coming Global Superstorm, Critical Mass is torn straight from the dark pages of a very dangerous and very possible future.

After turning Ann Coulter into a brain-munching alien (2012: The War for Souls), Whitley Strieber delivers a more serious political thriller. This audio starts out slow, then picks up with a terrorist nuclear attack on Las Vegas and a spy-versus-spy marathon. Strieber refuses to play the genre straight, so listeners also hear lectures on the science of radioactivity and the dangers of die-hard loyalty to a single party. Paul Boehmer narrates without much expression. All the dialogue sounds similar, with a slightly higher pitch, inconsistent accents, and long pauses between sentences. Boehmer's delivery of the narrative is clear but perhaps too steady, a style that makes it easy to lose track of the story thread.

OK, I wasn't expecting much from Strieber, so I can't say I was disappointed. He is good at conceptualizing stories, but the writing falls short. Sometimes, laugh out loud short. I really wanted to like this book, being a fan of doomsday scenarios, but the action sequences were often poorly put together and implausible. Anyway, I got through it, and it's interesting enough to anticipate the listen.

Typical script for an "Action" movie

Well written, but lacking in a cohesive theme.

Whitley Strieber has always enticed me with his tales. Be it either a "true" depiction of alien abduction, to this fun romp through end of days terrorism. The story, I feel, is cohesive, verses the other reviewers that it's not. But that's just my opinion. I found myself listening to it for hours, eager to know what was coming next. I like his style and I like this story.

No character building, over extended descriptions of events to fill pages, no real connection with the story line. I forced myself to listen to the end. If you can't find anything else worth reading/listening to, it's a maybe.