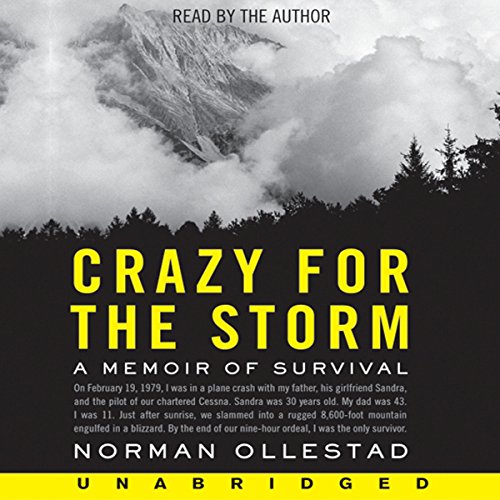 From the age of three, Norman Ollestad was thrust into the world of surfing and competitive downhill skiing by the intense, charismatic father he both idolized and resented. While his friends were riding bikes, playing ball, and going to birthday parties, young Norman was whisked away in pursuit of wild and demanding adventures. Yet it were these exhilarating tests of skill that prepared "Boy Wonder," as his father called him, to become a fearless champion - and ultimately saved his life.

Flying to a ski championship ceremony in February 1979, the chartered Cessna carrying Norman, his father, his father's girlfriend, and the pilot crashed into the San Gabriel Mountains and was suspended at 8,200 feet, engulfed in a blizzard. "Dad and I were a team, and he was Superman," Ollestad writes. But now Norman's father was dead, and the devastated 11-year-old had to descend the treacherous, icy mountain alone.

Set amid the spontaneous, uninhibited surf culture of Malibu and Mexico in the late 1970s, this riveting memoir, written in crisp Hemingwayesque prose, recalls Ollestad's childhood and the magnetic man whose determination and love infuriated and inspired him - and also taught him to overcome the indomitable. As it illuminates the complicated bond between an extraordinary father and his son, Ollestad's powerful and unforgettable true story offers remarkable insight for us all

Ollestad's memoir opens with his recollection of being in a plane crash in California's Sierra Madre mountains at the age of 11. With the others in the plane dead, including his father, Ollestad had to find his way down from the stormy, icy mountains alone. The author speaks in a voice jerky and unsure of itself, portraying himself as the whiny boy he once was, but without imitating him. In humble sentences and abrupt dialogue he recounts the profound emotional lessons gleaned from enviable, yet infuriating, bonding experiences with his dad. Ollestad re-creates the characters who molded his youth, narrating in but a single voice, but crafting ardent personalities with inflection and rhythm.

Muscular writing, great narration, and a tale that stands up to the best in suspense fiction. I stayed up half the night listening to this memoir, which is part coming-of-age story and part homage to 1970s Los Angeles beach culture. More than anything, however, the book is a tribute to the author's larger-than-life father, who died in the same plane crash that his 11-year-old son was able to survive by applying the lessons his father had drilled into him from birth. Ollestad does an impressive job of conjuring the free-wheeling surf-and-sex beach culture of his formative years. Equally cool is the way he organizes this remarkable story, which weaves back and forth between memories of his childhood and his harrowing experiences on the icy mountaintop where the plane crashed, killing everyone but the author. For nail-biting suspense combined with a child's-eye view of what it's like to grow up with magical but flawed parents, I can't recommend this one highly enough....

Crazy For This Book

Because this book is mainly about a boy and his father, women might not find it quite as entertaining as myself. However, I must confess I found Tom Wolfe's "I Am Charlotte Simmons", about a girl, thoroghly entertaining. Although the story revolves around a plane crash, the adventerous stories of Norman's life leading up to the fateful moment, especially the trip to Mexico, maintain a high level of interest.

Nice But Not Great

Nice book but not all I was hoping for. The author was obviously not a professional writer so the book has a lot of weak spots.

The first 2/3's of the book moved between memories of writers father and escaping the airplane crash that killed him. These are the best parts. The last third was how he lived with his father's death for the next half year or so. This part doesn't really go anywhere and has a lame ending.

This book is not really an adventure or survival book but more a tribute to a man's love of his father and his memory. We would have all loved a father like him.

Aside from Norm Ollestad's monotone delivery of this audio book the subject matter is quite interesting. I am surprised that he lived through most of his dad's antics and predicaments!!

I’m glad I took a chance in this one. I’m not into surfing or competitive skiing but this is a good listen.

You couldn’t make this up. Increíble storytelling and writing. Every word hits home. I couldn’t stop listening.

My husband always said this was his favorite book. I just thought it was because snow skiing is his favorite past time. This only attempts to scrape the surface. This story melds all elements of a true literary masterpiece into real life experience. The audible version being narrated by Ollestad himself, unlike most audibles, is even more impactful than reading the book. So many life lessons here that are applicable in so many situations! Just like a novel that leaves you missing the characters, I find myself wanting to meet Norman Ollestad and share a “hot toddy” and some fresh tracks!

Great book.
I grew up in Southern California not 30 minutes from Topanga Canyon and would head to the beach with my sister to watch the Surfers.
This book brought back so many memories.

Suffers from flaws of 1970s

It does sound like the realistic memories and highlights from life and a preteen in the 1970s. No doubt that shaped the author. But it too often dwells on sexual points irrelevant to the story, like a preteen. And the misogyny it rampant, by his father, and by his mother’s partner. And by the author, from the one dimensional picture he paints of his mother.

A must read for every father. Inspiring!

What did you love best about Crazy for the Storm?

I grew up in a similar fashion in Central California, Skateboarding, Surfing, Snowboarding at Tahoe and Mammoth. A tough childhood, through two divorces, it was easy for me to relate to Norman's experience. Love this book, will probably read it again after some time.

Thanks for writing it!

Have you listened to any of Norman Ollestad’s other performances before? How does this one compare?

No, but this one was great.