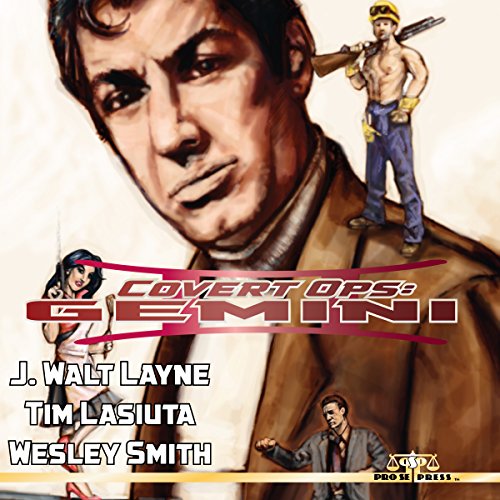 In a world where no one can be trusted and no one is safe, spies are everywhere. In the kitchen of the small house on the corner. High above a city at the top of a skyscraper under construction. In the checkout line at the local grocery. People with skills unheard of by most normal citizens living normal everyday lives as accountants, teachers, plumbers, and more. Everyday existence is their only battle...until a lone voice on the other end of the phone or in the static of a radio or even whispering in their ear from over their shoulder welcomes back to the war. Their own personal codename followed by one word - gemini. And then the housewife, the normal joe, Mr. and Mrs. America become the deadliest espionage agents this country has ever created, members of the top secret initiative known by very few as Covert Ops: Gemini.

Pro Se Productions, concept creator Tommy Hancock, and authors J. Walt Layne, Wesley Smith, and Tim Lasiuta proudly present Covert Ops: Gemini. In the tradition of Mission: Impossible, Covert Ops: Gemini delves into the world of international espionage and looks at the men and women who make up the deadliest team of spies ever. Led by Steven Graves, roguish and calculating agent, and overseen by the mysterious Officer James, members of Covert Ops: Gemini live regular lives, hold down normal jobs, build families and careers, until they are needed. Then they step away from their desks, their aprons, their very existences and put skills outside of their normal persona into use as they were trained to. What follows for them may be failure or even death. But, if they succeed, not only does the world go on, but they get the one thing back they value most - their covers. Classic spy fiction at its best!