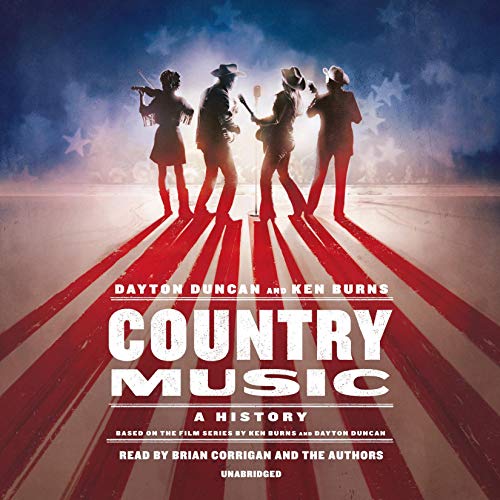 The rich and colorful story of America's most popular music and the singers and songwriters who captivated, entertained, and consoled listeners throughout the 20th century - based on the upcoming eight-part film series to air on PBS in September 2019

This deeply researched and hugely entertaining history begins where country music itself emerged: the American South, where people sang to themselves and to their families at home and in church, and where they danced to fiddle tunes on Saturday nights. With the birth of radio in the 1920s, the songs moved from small towns, mountain hollers, and the wide-open West to become the music of an entire nation - a diverse range of sounds and styles from honky tonk to gospel to bluegrass to rockabilly, leading up through the decades to the music's massive commercial success today.

But above all, Country Music is the story of the musicians. Here is Hank Williams' tragic honky tonk life, Dolly Parton rising to fame from a dirt-poor childhood, and Loretta Lynn turning her experiences into songs that spoke to women everywhere. Here, too, are interviews with the genre's biggest stars, including the likes of Merle Haggard to Garth Brooks to Rosanne Cash. Rife with endlessly fascinating anecdotes, the stories in this sweeping yet intimate history will captivate longtime country fans and introduce new listeners to an extraordinary body of music that lies at the very center of the American experience.

this was a great book! In my opionion the only thing that would make it better is if they would of put snippets of the songs in the audio.

I was highly anticipating the PBS documentary. So much so that I pre-ordered the hardcover and audio versions of the book. None of them were disappointing. I'd watch an episode with the hardcover so I could follow along with pictures, then listen to the part of the book covering that episode the next day. Much easier to absorb the details that way.

As to the content of all of them, you get the most from the books. Does that mean absolutely everyone in country is covered? No, there just wouldn't be time. My husband was disappointed that it ends in 1996, but again, there are time constraints.

Another upside to this being a Ken Burns product is you get the facts, not tabloid fodder. (Maybe someone else would approach it the same way, but I'm a big fan of KB's Civil War, Roosevelt and Vietnam documentaries.)

Narration and production are all professional and polished. Well worth repeat listens!

Perfect Burns documentary that chronicles country music and its reflection on our shared history. Most American music is based on the influence of many peoples...country music is no different. This documentary show how country music reflected/s a way of life. Highly recommended. Watch the tv show as well. Like others, I wish they would have included more of the songs that shaped history.

This book connects all of the dots and fills in the gaps. It was really interesting to find out where it all comes from and understanding how each generation moved into the next gave me a lot more of an appreciation for what each one brought. If you are a music fan at all, even if country isn't your thing, this is a must. Its more than just country music, its a significant part of American history.

If you have “lived life,” or intend to, this history— the history of “us/US” — will nourish you, guide you, and possibly sustain you in a way few works can. My emotional roller coaster was in almost constant motion throughout this tome. Thank you, Dayton and Ken, for this obvious labor of love.

This is the WRONG narrator period , Nvm I redact

I enjoyed listening to this book. I would highly recommend it. a must for country music fans