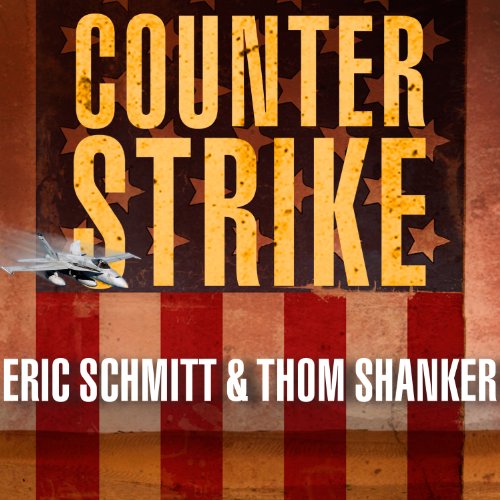 In the years following the 9/11 attacks, the United States waged a "war on terror" that sought to defeat Al Qaeda through brute force. But it soon became clear that this strategy was not working, and by 2005 the Pentagon began looking for a new way.

In Counterstrike, Eric Schmitt and Thom Shanker of the New York Times tell the story of how a group of analysts within the military, at spy agencies, and in law enforcement has fashioned an innovative and effective new strategy to fight terrorism, unbeknownst to most Americans and in sharp contrast to the cowboy slogans that characterized the U.S. government's public posture. Adapting themes from classic Cold War deterrence theory, these strategists have expanded the field of battle in order to disrupt jihadist networks in ever more creative ways.

Schmitt and Shanker take listeners deep into this theater of war, as ground troops, intelligence operatives, and top executive-branch officials have worked together to redefine and restrict the geography available for Al Qaeda to operate in. They also show how these new counterterrorism strategies, adopted under George W. Bush and expanded under Barack Obama, were successfully employed in planning and carrying out the dramatic May 2011 raid in which Osama bin Laden was killed.

Filled with startling revelations about how our national security is being managed, Counterstrike will change the way Americans think about the ongoing struggle with violent radical extremism.

"Should appeal to anyone who wants to understand the parameters of the ongoing fight against terrorism." ( Publishers Weekly)

Listen to the sample before buying

Seems like a great book. Listen to the sample before deciding to purchase. I could not make it past the first chapter, before taking off my headphones. The narrator is only a single notch above the automated voice on the overhead at an airport. I think I will be reading the hardcopy. I have bought over 20 books on Audible and have never had this problem before. Again listen to the sample.

Good but not great

I was put off from trying this by some of the other reviewers, particularly their views of the narrator. Personally I did not find him to be bad. I have certainly heard better, but I had no trouble finishing this book. The writing was repetitive in places and the book dragged in places. I am glad I listened to it, but couldn't help thinking that a well edited abridged version would have been more enjoyable. In any case, if you want to understand what is going on in the war on terror, you need to read (listen to) this book.

Who would you have cast as narrator instead of George K. Wilson?

I heard the authors on NPR's Fresh Air and it would have been better if one of them had read the book.

The narrator on the audio book had a tone that almost put me to sleep but the book was good. It was great to hear about all the government is doing to combat terrorism. I never hear of most of these techniques in the newspaper. The holistic plan by the US is wider than expected. It makes you feel better about the US military than any other press they get.