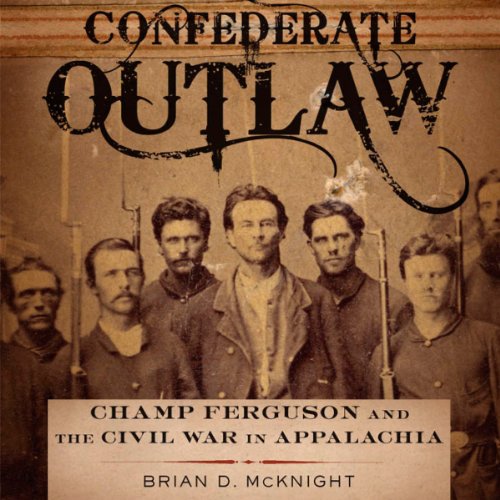 ''This vivid portrait of one of the Civil War's legendary renegades is a welcome addition to the ever-expanding scholarship on guerrilla warfare. Brian McKnight adeptly draws on Champ Ferguson's ruthless and reckless exploits to provide fresh insights into the complex forces that propelled southern highlanders into a far more personal and localized conflict than that waged elsewhere in the Confederate South. A masterful study of both the man and the Appalachian society that produced him and his compatriots.'' (John C. Inscoe, author of Race, War, and Remembrance in the Appalachian South)
''This insightful and deeply researched book paints a vivid picture of the infamous Rebel guerrilla Champ Ferguson and the war-torn mountain region where he pursued his homicidal career. An important contribution to our understanding of the Civil War in southern Appalachia.'' (Stephen V. Ash, author of Firebrand of Liberty: The Story of Two Black Regiments That Changed the Course of the Civil War)

In the fall of 1865, the United States Army executed Confederate guerrilla Champ Ferguson for his role in murdering fifty-three loyal citizens of Kentucky and Tennessee during the Civil War. Long remembered as the most unforgiving and inglorious warrior of the Confederacy, Ferguson has often been dismissed by historians as a cold-blooded killer. In Confederate Outlaw: Champ Ferguson and the Civil War in Appalachia, biographer Brian D. McKnight demonstrates how such a simple judgment ignores the complexity of this legendary character.

In his analysis, McKnight maintains that Ferguson fought the war on personal terms and with an Old Testament mentality regarding the righteousness of his cause. He believed that friends were friends and enemies were enemies - no middle ground existed. As a result, he killed prewar comrades as well as longtime adversaries without regret, all the while knowing that he might one day face his own brother, who served as a Union scout.

Ferguson’s continued popularity demonstrates that his bloody legend did not die on the gallows. Widespread rumors endured of his last-minute escape from justice, and over time, the borderland terrorist emerged as a folk hero for many southerners. Numerous authors resurrected and romanticized his story for popular audiences, but McKnight’s study deftly separates the myths from reality and weaves a thoughtful, captivating, and accurate portrait of the Confederacy’s most celebrated guerrilla.

An impeccably researched biography, Confederate Outlaw offers an abundance of insight into Ferguson’s wartime motivations, actions, and tactics, and also describes borderland loyalties, guerrilla operations, and military retribution. McKnight concludes that Ferguson, and other irregular warriors operating during the Civil War, saw the conflict as far more of a personal battle than a political one.

Confederate Outlaw: Champ Ferguson and the Civil War in Appalachiaに寄せられたリスナーの声

The story of C.F., even with a strong Nationalist/anti-South bias, is fascinating and engaging, albeit (at times) annoying.

The reader's voice & diction is good, but he trips over his words at times and seems to be reading this material cold.

I cannot recommend it, although I cannot say that I am sorry that I took the time to listen to it.

A wonderful example of "Glorious Union" apologetics in its closing chapters.

The southern answer to the tyrannical yankees

If you could sum up Confederate Outlaw: Champ Ferguson and the Civil War in Appalachia in three words, what would they be?

I would say that the three best words to describe this story line would be vindication, riotousness and tenacity.

It did follow as much of Champs life as possible, considering the lack of the ability to interview eyewitnesses since all are dead from that time. Also the lack of personal papers from Champ makes it difficult to get inside his head.

I am sure the reader was trying to do the best he could, but it sounded like the fellow had been asked to read the book cold, without any run-through. He consistently stumbled over words and really missed the colloquialism of the area. My family was from that area and I have cousins who speak with the accents of Tennessee and Kentucky, so I know how things should be said. The reading of the book makes it very very hard to get through it. Like stumbling through the dark in an unfamiliar room. Very awkward.

Yes... had the reader been better. I kept wanting to read the book for him, it was very painful to get through... I mean the reader was pretty bad!

I am a southerner, my family had a plantation in what is now Picket County Tennessee and we had a run in with Champ Ferguson during the War. We supported the south 100% but protected an inlay who was deathly ill from small pox. Champ came to kill this fellow and my Great Great Grandfather (Willis Huddleston Parris) talked Champ out of it because Champ knew how strongly we supported the cause for the south and my Great Great Grandfather was a County Judge as well. I wrote the author with the details of this story after I read his book but he did not seem to be very interested. I still hold the opinions of my forefathers and apparently the author does not, thus even though the book was well written and held my attention (minus the horrible reading) I felt the author was just slightly biased. But I could be wrong. I just felt the very slightest bias. Over all I think this is a great book for Civl War buffs in that it sheds light on aspects of the War which breaks the traditional battle lines and generals in command.

A great book and read. The only downfall is the person who’s reading to you. It’s almost like he didn’t prepare for the book at times. But once you get pass that it’s a good book.

A Hero for Today

The patriotism of Ferguson for the cause of limited government is certainly something to be emmulated today.

The storyline provided tons of information and insight into the guerilla warfare of the civil war. The performance was difficult at times to listen to. seem unprepared.

Would you listen to Confederate Outlaw: Champ Ferguson and the Civil War in Appalachia again? Why?

Yes. I enjoy the civil war history and the book is well written and brings you into that era.I was familiar with the locations in Cumberland Gap the book talked about and that was cool to think about this story partly taking place there.

I enjoyed reading about all the characters; not really a favorite.

What does Alex L. Vincent bring to the story that you wouldn’t experience if you just read the book?

The narrator has a very clear crisp tone and is pleasant to listen to. Brings life to the story. Sounds like he was well prepared in his reading.