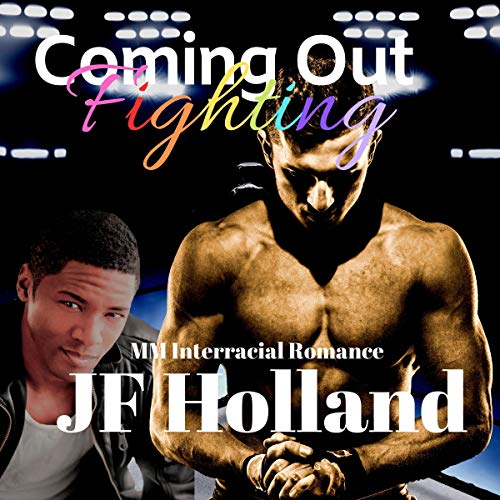 On a night out with his ex-wife and best friend, Lorie, Lawrence Reynolds is introduced to Mat Bailey and his life will never be the same again.

For the first time in his life, Lawrence has found someone he wants to spend the rest of this life with. However, he has a huge obstacle, he's never come out to his father. Lawrence is an MMA fighter, and his trainer and manager is his own homophobic father.

All his life he's had to hide his true self behind a façade, scared of his father's disapproval.

After messing up and hurting Mat badly by publicly denying their relationship, Lawrence will now be in for the fight of his life. Unfortunately, this one can't be won with his fists, and the reward is more valuable than a belt.

Coming out could win him the man of his dreams but lose him his father and his career.

Will he come out, fighting for love?

Contains adult scenes not suitable for under 18 years old.

This was a good listen and I enjoyed it overall. The story was good, but had a few eye roll/ not very believable moments mostly in the end of the book and these few moments impacted my rating. I liked all the characters, Matt and Lori were my favorites and Lawrence was interesting and likable despite his flaws. Narrator did a good job and I enjoyed his voices for every character as well as how he told the story. This was my first book by the author and narrator and I am looking forward to more books by them.

Coming Out Fighting is an enjoyable story as Lawrence struggles with his sexuality. He's an MMA fighter with his homophobic father as his trainer. When he meets Mat and doesn't defend him against his father's verbal abuse Lawrence has to decide to come out to his father or loss Mat forever. This is an emotional journey Lawrence takes to find happiness and self acceptance.
Narrator Mitchell Pett does a wonderful job.

I know everyone has their own timetable and circumstances as to how, when, if they come out, but I was massively disappointed that Law didn't stand up for himself with his dad etc... I was also disappointed that in the story he got drunk and had sex with a woman-NO WAY!!! That can't happen with all his protestations about no interest in the female body plus they were like brother and sister. Yuck!! Too whack!!! Life is too short for major pretenses like this-live it!!
Not a fan of Dan's lies about his sexuality and club ownership! JERK! The 180 change in homophobic dad was truly unbelievable. It was rushed and too fast after all his hate speech. I voluntarily listened to a free copy of this and am giving an honest review. The narrator did a good job.

New narrator for me, he was pretty good. Story felt to rushed to me .

3.5 I enjoyed this book. It was an endearing tale about friends who entered into a marriage of convenience and had a child. As mature people, and best friends (which is mentioned an innumerable amount of times) they divorce and decide to co-parent amicably. After the split, the ex-wife falls in love with someone else...oh and by the way a romance between two men happens. I could have used less interaction between mom, dad, and stepdad and more story about Lawrence and Matt. There story did not get enough attention. Lawrence has issues with intimacy, which was mentioned in passing by both Kevin and Matt, but when Lawrence makes a grand gesture to kiss Matt in his locker room, there is no discussion from his side about why he did it and how he felt after he did it. Names: 1) Having two characters with similar sounding names, Lori and Lor (nickname for Lawrence) were confusing at times when you are listening to the story. 2) Lawrence’s dad is identified as Ben after the blowup with Matt, but Doug in the last chapter. On a personal note, “sexual preference” is antiquated language. LGBT persons don’t “prefer” to be LGBT, they just are that way. I cringed every time I heard that. 3) I am not sure if it is an oversight or a matter of skill set, but the author does not seem able to describe the ratites of Black people. She mentioned his skin color and his blue eyes...and the blue eyes were mentioned a lot!!! Leading me to believe the only way the author can describe a Black person is by giving them features you would normally associate with Caucasians (although there are Black people with blue eyes, it is not very common).

This book made me think. It’s hard to imagine people have still got issues with people in same-sex relationships. With great writing skill this author definitely portrays how hard it is for a man in a male dominated career to open up and tell the world who he loves. With good likeable characters and a difficult subject to broach, I found this storyline a winner. A fantastic performance from Mitchell.

MMA fightee, fights to be himself

Lawrence has been in the closet his whole live, mostly due to his bigoted dad.He and his bff had even gone as far as being married for both there benefits. Now they are divorced and Matt wants to be out after finding Matt. Matt had his own struggles. Maybe in another story we can get more of his background. In the end Lawrence comes out and has his hfn/ hea with Matt. Narration by Mitchell Pett is with an UK accent. As a none native speaker I could follow it clearly, it actually gave the whole setting an extra layer. However sometimes it was hard to differentiate between certain names. The author was new to me, I would certainly buy more books from JF Holland
I would recommend this book. This audiobook was given to me for free.

I liked this story. Fighters and out-for-you sports romance are always a plus.
Although I must admit that I was not super fond of Lawrence: for how much of a great and caring father, ex-husband and best friend he is, he really came across as a bit of a pushover and almost careless sometimes in his behaviour towards Mat. That being said he eventually gets his geese in a row and makes up for his foolishness.
I absolutely loved the extended family, with little Sam being so cute.
The audio was exceptional. I think it really gave an extra boost to the story as Mitchell Pet really did an awesome job of bringing the characters to life!

as good as the ebook

The performance from the narrator is also very important for me. I can't listen to a lot, because my English as a non-native-speaker isn't so perfect to follow a whole story over hours, when the narrator speaks too fast or too sloppy. Normally I have to SEE the person, who is talking to me in English. It took me a little bit, to come into the narrator, but at the end, it worked. I only have to take a few breaks between. I'm just not yet finish with the book, I’m over the half, but I listen enough to give a review.

A lovely story about to stand true to youself - even if it means that you have to loose the ones you love.
I am happily suprise with all the feeling the men felt.

The narrtor Michell Pett did a good job.

The author JF Holland are new to me and I´m looking forward with her other books.

Coming out romance for an MMA fighter

Lawrence is a professional MMA fighter, trained by his homophobic and controlling father. Lawrence has gone to great lengths to stay in the closet, including marrying his BFF, Lorie, but when he meets Mat, things must change. This was a straightforward, heartfelt coming-out romance. I felt the story zipped along a bit fast, especially the resolutions, and could have gone deeper. I would have also liked more of the backstory between Lawrence and Lorie marrying and divorcing and a lot more of Mat’s backstory. 🎧 I liked Mitchell Pett’s regional UK accent and his handling of emotion, although I found his narration a little halting in places. I had to concentrate to distinguish between the names Lawrence and Lorie.
___________________
I received a free copy of the audiobook and volunteered this honest review.

This is one of my favourite story’s and hearing it being bought to life just added to my love for it..
I loved the voice of the narrator he took JF Holland’s words and gave them feelings and realness..An absolute joy for my ears.

I have listened to this wonderful audiobook in one sitting , it is honestly such an awesome audio.
A difficult story line as I can never understand bigotry or hatred ...
Love is Love and families are all different ,
Great words written with such wonderful characters each and everyone had substance.
Wonderful narration by Matt Pett...
I cried so many happy tears , I can't give enough praise for this audio book..
I shall miss the characters ..so I am listening again now.....