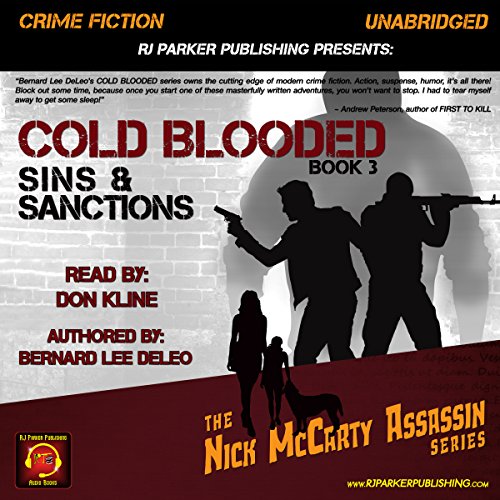 "Bernard Lee DeLeo is one of the purest writing talents I have ever had the pleasure of reading - a brilliant writing talent that I can only envy." (James Byron Huggins, New York Times best-selling author)

Nick McCarty's new boss opens the keys to the kingdom for the coldest-blooded killer he's ever met. When fighting psychopathic murderers and terrorist cells hell bent on America's destruction, there is one old football cliché that fits: Winning isn't everything...it's the only thing. Nick's book tour turns into a bloody rampage, leaving little doubt he embraces his boss's new management style. Returning to his Pacific Grove refuge with family and friends, Nick decides to bring his deadly business more into the open...and business is good.

Bonus: a short story with Nick McCarty and his daughter, Jean, on a future mission together.

another great book in the series

another great book in the series anxiously waiting for the next one. this is one of my favorite series by this author

I have listened to several of this authors book and this is the first one I couldn't get through. The performance was horrible. The story was warmed upped poorly presenter nightmares and hope's of ethnocentristic simpletons.

It's hard to know where to start when the narrator hasn't perfected his skills (if any) enough to make the book seem real, exciting and brings the listener into the story, It was a serious error to choose Don Kline as he is (in my opinion) either a real amateur or a total incompetent. Does the author have any chance at approving the narration? While I was very interested in the first 2 books, this one was tedious and the narration the main character unlikable. Sadly, when the main character is not a complete hero, it requires the right voice to bring you into the story. This didn't happen for me. Please get a new narrator or get Mr. Kline some speech lessons. He really was terrible.

I can't believe this narrator has a Job.

I couldn't even get through this book as this narrator was so bad that he completely ruined the character for me.

He was so bad I simply don't understand how the people involved in the recording didn't recognize this fact. Nick McCarty is now ruined for me

I really enjoy all Mr Deleos books. I look forward to more of them on audio. I like to listen them often while doing housework, it makes the mundane tasks bearable. The written ones keep me from getting any work done even though I've read them repeatedly. Please keep the audio books coming. The narrator's that have been used are terrific. They have kept the characters real. Thanks for the entertaining hours.