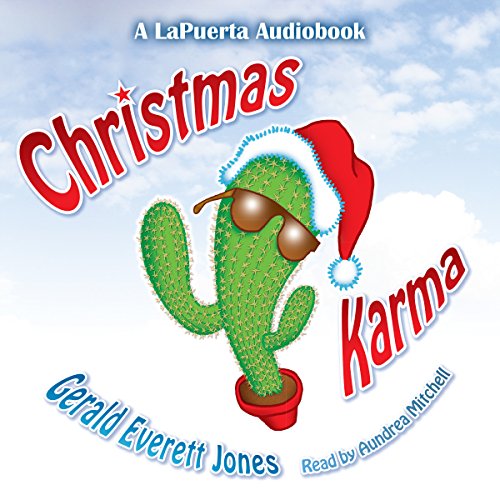 Christmas Karma is author Gerald Everett Jones' homage to Anne Tyler, whom he regards as his literary mother. It's about the travails of a dysfunctional family around the holidays, narrated by an angel who has a wicked sense of humor. Main character Willa Nawicki is bewildered by a series of curious karmic events that literally ring her doorbell during the frantic season, awakening years-old resentments and stimulating ever-more-intense personal confrontations. These bizarre visitations include a grizzled old man claiming to be her father, who has been missing for some 30 years but now says the title to the family home is in his name - and now he wants the place back. As the angel observes, "The surest way to invoke the laughter of the universe is to make plans, particularly devious ones."

i don't think i would call it karma

This was an odd story, due only in part to a glitch that mis-ordered the chapters and some unusual pronunciations by the narrator (mack-a-bray for macabre, as an example).

It was full of unexpected twists and turns...maybe a bit too much. It was simultaneously amusing and sad to watch these characters bumble through the holiday season and the odd set of circumstances they found themselves in.

If you'd like to check this one out for yourself, I'd recommend going with the print/Kindle version.

I have to say this dysfunctional quirky family travels an interesting road through the holidays and then some. The characters each have a personality that will make you laugh, cry or maybe just scratch your head and say "duh?" It was a fun little novel.

"Christmas Karma' was a cute story. I liked the premise and the characters. The story, in combination with the narration was hard for me to follow though. Aundrea Mitchell has a nice voice but I felt that her voice inflections were off to the point of being distracting. It's just a matter of adjustment. Otherwise, the story itself was great.

I found it some what amusing ,but I believe that Aundrea Mitchells halting narration distracted me from the story.The storyline is as follows.A semi happy couple Norm and Willa, live in a modest ,paid for house with the wifes mother.When the mother Liz dies,Her husband,that abandoned the family years ago returns to tell them that he still owns the house.There are other stories going on besides these and it is a bit of fun figuring things out.
"This audiobook was provided by the author, narrator, or publisher at no cost in exchange for an unbiased review courtesy of Audiobook Blast."