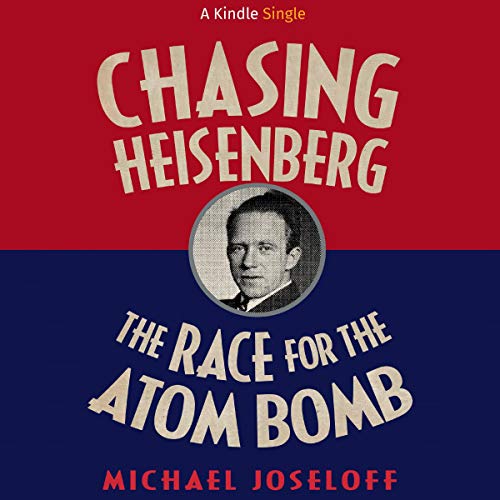 After a devastating run of German victories, Allied troops are beginning to halt Hitler’s advance. But far from the battlefields, Allied scientists are struggling.

Intelligence reports put them a distant second behind the Germans in a competition that could determine the outcome of the war: the race to build the world’s first nuclear weapon.

Fear that he’s put country first and is building a bomb haunts Oppenheimer and Fermi all through their months and years developing the Allied bomb. That same anxiety drives Goudsmit, now a top Allied intelligence officer, to risk his life as he attempts to track down Heisenberg and the site of Hitler’s suspected atom bomb program.

A Good Overview/Introduction to the Bomb Race

This book presents a good overview of the scientific conflict between Axis and Allied atomic bomb regimes. Unfortunately it is not long enough to be comprehensive of either the American or the German projects. It also uses some quotes from Oppenheimer's security hearings out of context, further deepening the popular perception that Oppenheimer was anything other than a loyal American patriot during his time as the director of the Manhattan Project. Other than those qualms, I found it to be well-researched and written in a very accessible way to non-scientists.

The Race for the Atom Bomb

This book is a great mix of history, WWII events and physics. It has just the right amount of physics to educate the reader without getting too deep into it and make it hard to follow. The author does a good job in following Heisenberg as well as other well known scientists of the times. The narrator does a good job and keeps the readers' interest in a sometimes technical subject.

Great audiobook well worth the time and $

Very well written band performed. Goes quickly without a bunch of fluff. Fills in many gaps that typical history books left out.

Just the right amount of material

May authors would write about every detail until the book grew to 30 hours, and then I would never read it. A great story and only the good stuff. 3 hours of meat and no filler. Loved it and it filled in many gaps in my knowledge of the topic. One of my favorite parts of the story was showing how vain players in the story tried to polish up their roles in history.

loved it! just came back from a German river cruise and the historical aspect was very interesting