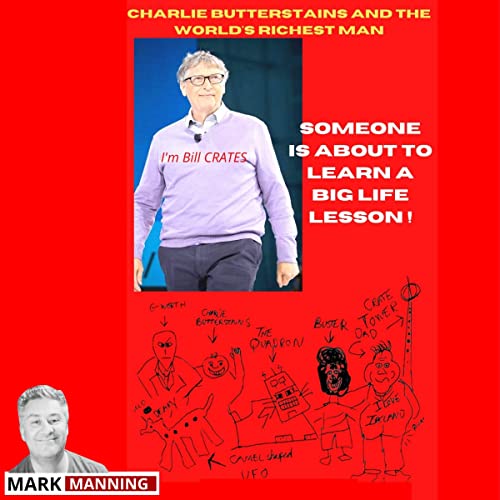 Young Charlie Butterstains dreams of being Bill Crates, CEO of Macrohard; he's the world's richest man. Charlie thinks it would be great to have all that power and rich lifestyle. However, stuck in rainy Croydon, London, England, with the world's laziest father as a role model, it doesn't look likely that anytime soon Charlie will be making his billions of dollars in sunny America. Ah yes...a boy can dream of flash sports cars, private jets, skyscrapers, and swimming pools and Lady Ga Ga for company.

What Charlie doesn't know is that any moment a very odd camel-shaped UFO going "Hello Deary...Helloooooooo Deary" is going to whizz down in Croydon with a very special alien onboard. An alien who can make Charlies wildest dreams come true.... But first Planet Bromide's big life lesson must be learnt.... Will Charlie learn it? Or perhaps...someone else will.

Note: Some rudey boldy words (words that rhyme with mutt and bart, etc.) are rarely used in this audiobook; when they appear it is usually in a funny context. Adults should get a laugh too. Incidentally I was once on a plane with the world's richest man...but that's another story.