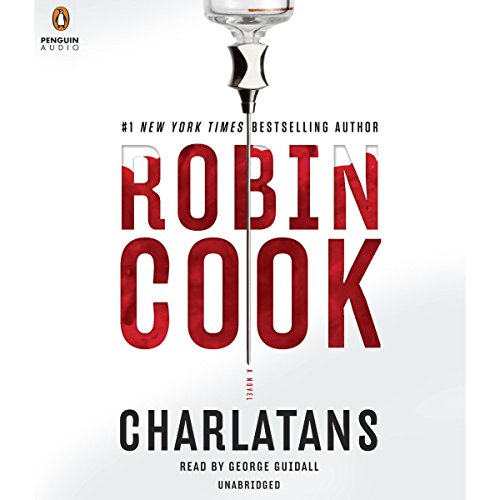 “Where Cook shines is in illuminating that combination of impersonal professionalism and potential terror haunting every hospital corridor. A return to form for the master of medical malevolence.” (Kirkus Reviews)

“Cook has been cranking out best-selling medical thrillers since the mid-1970s, and he long ago worked out a formula that works for his fans. [Charlatans] is no exception, proving once again that there is comfort and entertainment to be found in the familiar.” (Booklist)

Newly minted chief resident at Boston Memorial Hospital Noah Rothauser is swamped in his new position, from managing the surgical schedules to dealing with the fallouts from patient deaths. Known for its medical advances, the famed teaching hospital has fitted several ORs as "hybrid operating rooms of the future" - an improvement that seems positive until an anesthesia error during a routine procedure results in the death of an otherwise healthy man. Noah suspects Dr. William Mason, an egotistical world-class surgeon, of an error during the operation and of tampering with the patient's record afterward. But Mason is quick to blame anesthesiologist, Dr. Ava London.

When more anesthesia-related deaths start to occur, Noah is forced to question all of the residents on his staff, including Ava, and he quickly realizes there's more to her than what he sees. A social-media junkie, Ava has created multiple alternate personas for herself on the Internet. With his own job and credibility now in jeopardy, Noah must decide which doctor is at fault and who he can believe - before any more lives are lost.

Social engineering at its best

I work as an RN, CNOR, in short operating room nurse. This book captures an accurate snapshot of life in the medical field. Things can go terribly wrong in a heartbeat and there is a whole cascade of incidents that lead up to it. You can give 110% and things still go wrong. (As health care workers we are always trying to fix that).
But the real story is the social engineering that is going on in everyone's lives.
It has taken away the human elements of connection and experience. The book acknowledges that the mind cage of &quot; cyber&quot; life is real. To me that thought is horrifying. Worth your time $ or credit. It does get you to think. Which is the purpose of good books.


The fix for US Health care unveiled

What made the experience of listening to Charlatans the most enjoyable?

Through the interaction between anesthesiology, surgery and Facebook, Robin Cook weaves a sneaky plot that ultimately forces the reader to examine beliefs about traditional medicine and high-tech medical training that can be uncomfortable. The fascinating characters shine light on the current medical education process vs the today's potential and needs for both better medical care and lower health care costs.

What other book might you compare Charlatans to and why?

Have you listened to any of George Guidall’s other performances before? How does this one compare?

If George Guidall performs it, I read it. He makes every story feel like you are reading it to yourself, emphasis where it belongs, inflections just right. He is my favorite audiobook performer and largely responsible for my being able to listen to several books a week. As a retiree whose eyes are not what they used to be, with my bluetooth wireless earphones, my smart phone in my pocket, and George downloaded, I can listen to books while cooking, weeding, potting, cleaning, napping, walking the dog. If the phone rings he just politely stops talking, I say hello, have my conversation, and he resumes when my caller hangs up. This bookworm is happy.

Love Robin Cook and Boston. Always listening for how he injects Louisburg Square.

Something to Offend Everybody

I agree with other reviewers that "Charlatans" might not qualify as Robin Cook’s best effort to date … although, in general, his medical thrillers have been improving with each outing since his first 1977 effort, "Coma". With the exception of "Charlatans", Dr. Cook’s thrillers always address some important, urgent, frequently egregious issue relating to our dysfunctional medical care system. These issues generally boil down to human greed introducing corruption into the system: the insurance racket, big Pharma, hospital politics, and the like. However, in "Charlatans", Cook addresses the evils of … social media? … nutritional supplements? Yeah, I know.

Listeners who have had trouble relating to Cook’s previous novels might find "Charlatans" a bit more accessible than the others, because it indulges in less "medical-speak" than they do. None-the-less, I hesitate to recommend this novel to anyone who has not listened to any other samples of Dr. Cook’s oeuvre, because it just does not represent the captivating story-telling caliber that he normally offers us. On the other hand, veteran, silky-voiced, master narrator George Guidall delivers his usual skillful performance, given the material he has to work with here. Bottom line: Skip this one, unless — like me — you are a long-time Robin Cook fan.

Story was pretty good but I was let down at the end, after all the build-up. The main character was a bit of a wuss which frustrated me to no end. Finally, although the narrator has a wonderful, rich voice, and I could distinguish the characters, he seemed out of breath all the time, which became a fairly significant distraction.

Worst book by Robin Cook I have listened too.

Guidall was excellent and did his best with a poor story. I am very disappointed with this book, had trouble finishing it.

A winner from Dr. Cook and George Guidall

Unlike most of Dr. Robin Cook's medical thrillers during the last 40 years Charlatan deals with medical education and medical ethics in the age of the Internet and social media. The plot is fascinating. George Guidall's narration always makes a novel even better.

I am an avid Robin Cook fan and have also enjoyed listening to George Guidall............however, this book, being read by George Guidall is the worst I have listened to. I mean, really awful. Cannot even finish it and will be returning. Timing is bad and irritating, breathy and choppy.

I normally love Robin Cook novels, but I had to return this before I’d listened half an hour as the narrator was so bad I couldn’t concentrate on the story. He pauses after every word as if he’s out of breath and can’t get more than that out. I’m disappointed as I was looking forward to listening to it.

I thought the narrator was a little choppy and the story a bit slow. Not my favorite audio book.

Robin Cook's poorest work to date by far. Stupid, childish, irrational and a waste of your time. Plus extremely annoying reader with a weird way of splitting sentences in the middle for no reason.