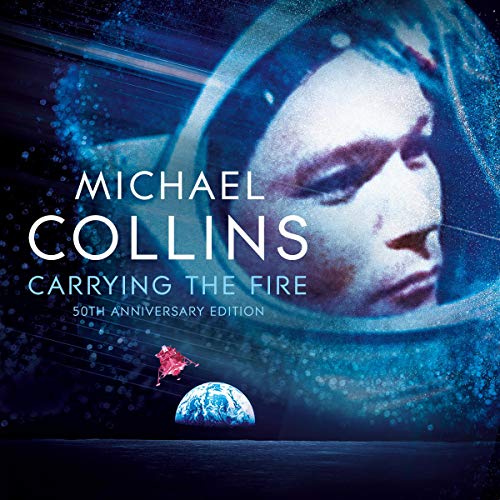 "No other person who has flown in space has captured the experience so vividly." (New York Times Book Review)

In July 1969, Neil Armstrong, Buzz Aldrin and Michael Collins piloted the Apollo 11 spacecraft to the moon. Fifty years later, it is still one of the greatest achievements in human history.

In this remarkable memoir, Michael Collins conveys, in a very personal way, the drama, beauty and humour of that adventure. He also traces his development from his first flight experiences in the air force, through his days as a test pilot, to his involvement in Project Gemini and his first spaceflight on Gemini 10. He presents an evocative picture of the famous Apollo 11 spacewalk, detailing the joys of flight and a new perspective on time, light, and movement from someone who has seen the fragile Earth from the other side of the moon.

Updated with a new preface to celebrate the 50th anniversary of the moon-landing, Carrying the Fire by Michael Collins is the utterly absorbing and truly compelling classic account of what it was like to be a member of the Apollo 11 mission to the moon.

I enjoyed every bit of it. As an engineer and pilot and space enthusiast. It carried me to the unimaginable details. Bless you michael Collins.

a must for the space exploration enthusiast

Very human and very accessible book.
I love space exploration, especially the early years.
Michael Collins gives a very down to earth (pun intended) telling of his adventures while at NASA.

Long but unique. A cult

Reasons to read :
1) story of one of the very biggest achievements of humanity
2) lots of anecdotes and insights on the early days of space exploration
3) very deep reflections on the meaning and purpose of space exploration for Collins and world at large

I first read this as a young 15 year old in 1975.
It made an impression on me then and has done so again in 2019.
A remarkable story of adventure grounded in the science and determination of getting man to walk on the surface of the moon.
It also goes into post moon landing and how the famous 3 led their lives in the wake of this world changing event.
I’ll be back for another read. I’ll probably not wait 44 years next time though.


I tried very hard to like this book but when I found myself checking my social media accounts while listening to it I realised that the struggle was pointless. Collins tells us that he wrote the book himself and did not use a ghost writer. Unfortunately, his editor was asleep at the wheel and allowed the book to become swelled with long passages on arcane details of the Apollo and Gemini space programs. If you are a space-history buff you will probably enjoy lengthy dissertations on space-suit design or the use of a sextant in space, but the general reader will probably doze off during these passages. At times Collins attempts to be witty but these attempts fail to leaven the overall dry tone of the book.

I felt an unsuitable narrator was chosen to read the book. At the time it was written Collins was still a relatively young man of 44 but the narrator sounds like an elderly man. This discord between authorial tone and narrative tone becomes irksome to the listener.

At times incredibly personal, always honest, this is easily the best account of the Apollo (and naturally 11 in particular) that I have ever read.

At times the 1970s gender role comments sound out of place in 2019 but it was written in a different time.

A must-read account of ridiculous bravery and invention. Collins strikes me as a genuinely nice bloke!!

Fabulous story, told for the average person, but particularly tasty for those interested in aeronautics & space travel.
Very well told by the narrator, who initially appears very melancholy, but as the story progressed the voice becomes one with the author.
The story covers all the questions you would ask a moon astronaut if you had the lucky chance of a conversation.
It is told in a highly intelligent yet humble way.
Michael Collins passed away recently, and when I heard the news, I bought the book which made it particularly poignant for me.
I was 10 when Apollo 11 flew to the moon.

I thought this book would be too long to hold my interest. I was wrong.

This had me hooked from the beginning. I found this ticked all the boxes. It has so much content . For me this one S the only book you will ever need to read , humble to the last and always with integrity. Outstanding.

It's a long book, but it held my interest for nearly all of the time. The final hour contains surprising foresight about the environment and changed my perspective of Collins to a more positive one than the book thus far.

Definitely worth listening to.

The story of the early Apollo missions through the eyes of Me Charl Collins. An astonishing achievement and hard to believe that it happened 50 years ago

Fantastic book with such insight into an Astronauts journey

We can watch film, video and television of space flight and think we know.
This is the real deal, tells is as it is.
Thank you Michael Collins

Not a one hit wonder

An excellent and fascinating first hand account. So rich I can listen to it again and again

I've read a dozen books on the 60s/70s space era and this is now one of my favourites. Detailed and entertaining... and even quite witty, I never once got bored or felt like it was dragging.

A review of NASA in the 60s

The book is a light hearted account of the Gemini mission. But I thought the author took a backseat approach and it wasn't too serious.

One of, if not the best autobiography’s ever written. Incredible. Mike Collins story is incredible.