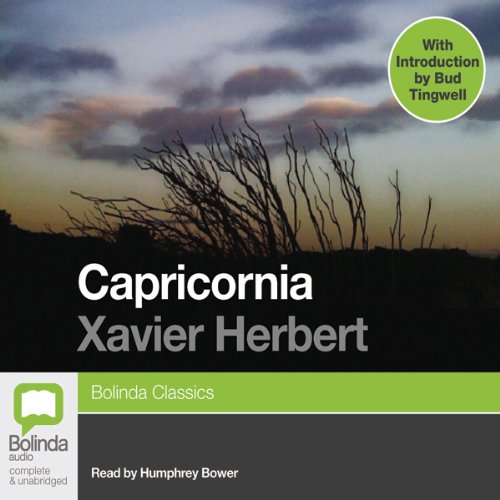 "Big, powerful, irreverent... as timeless as the stars, as Australian as spinifex." ( Sydney Morning Herald)

Here is the book that inspired Baz Luhrmann's Australia, the sweeping classic film of outback Australia. This is a true Australian classic - now available in audio for the first time.

Spanning three generations, Capricornia tells the story of Australia's North. It is a story of whites and Aborigines and Asians, of chance relationships that can form bonds for life, of dispossession, murder and betrayal.

In 1904 the brothers Oscar and Mark Shillingsworth, clad in serge suits and bowler hats, arrive in Port Zodiac on the coast of Capricornia. They are clerks who have come from the South to join the Capricornian Government Service. Oscar prospers and takes to his new life as a gentleman. Mark, however, is restless, and takes up with old Ned Krater, a trepang fisherman, who tells him tales of the sea and the islands, introduces him to drink, and boasts of his conquests of Aboriginal women - or "black velvet" as they are called. But it is Mark's son, Norman, whose struggles to find a place in the world embody the complexities of Capricornia itself.

One of Australia's Top Reads Made Easy.

This is a truly terrific book read by an excellent narrator. We listened to it travelling across the Australian Northern Territory, enthralled for the entire 22 hour performance. Humphrey Bower is a narrator at the top of his craft. I also loved 'Hand-me-down World' read by him.
Set in Australia's 'other country' of the Northern Territory, 'Capricornia' follows the story of a pair of brothers and their decendants as they learn to survive in this frontier society. Herbert's work is one of the greats of Australian 20 C. fiction and you don't have to carry the big bugger around! ( it's long) It is also a must-read for those interested in the history of black-white relations in Australia in the early 20th Century. Herbert writes with great understanding of the plight of the Aborigines and so-called 'half castes' in this violent post-colonial society.

This book was too long. It dragged out and was quite boring. I love Humphrey Bower, who makes listening to just about anything worthwhile.

This book is difficult to follow. The story line is nonexistent.

I am returning this book.

I had hoped for better

I usually love stories of Australia, but this one is pretty incoherent, especially at the beginning.

Not easy to follow but complex and full bodied with heady overtones that make more sense to the Australian perhaps than others. That being said, worth it for long term repeat listening

I tried really hard with this audiobook - sticking it out for over 8 hours. Such a waste of credit and not even the wonderful Humphrey Bower narrating could save this dire tale of undending misery. The writing is simply awful, with virtually no characterisation and the 'poetic' descriptions are trite to the point of laughability. If you want excellent audiobooks about Australia, go for the brilliant and highly recommended Bryce Courtenay and give this a miss.

I first read this in paperback just after the film 'Australia' had been released, as it was supposedly been the inspiration for the film. I found it hard going at first and couldn't get into the story. I revisited the book at a later point because something just told me to. Wow...This is a truly wonderful story, sprawling and vast, from heartwarming to tragic. A masterpiece. Listening to this epic is brought to life by a truly wonderful narration. This is on my list of favourite books.

If the reference to Baz Luhrmann's Australia doesn't fill you with glee, ignore it. This book is far, far better than the film, and bears practically no relation to it. It's fascinating historical information delivered by riveting story-telling. Xavier Herbert worked as a protector of Aborigines in Northern Australia, and his experience illuminates the narrative. I was kept awake long into the small hours by the emotional power of the writing. Very,very hard to press pause...