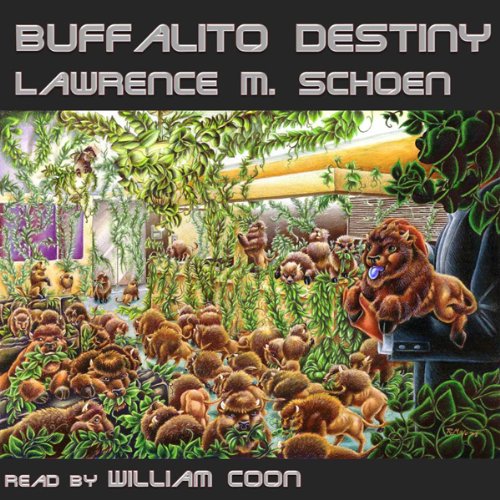 "Schoen makes the leap from short fiction to novel-length adventure with this eclectic, oddball tale of a man swept up by destiny, aliens, and circumstance.... Part crisis-filled road trip, part gonzo race against time and all tongue-in-cheek humor and charm, this nutty tale may sound strange, but Schoen somehow makes it all come together." ( Publishers Weekly)
"Makes for a fun read, especially given such a fantastic cast of characters." ( Booklist)

A former stage hypnotist, the Amazing Conroy really just wants to have a good meal. He’s now the wealthy CEO of a company that leases buffalo dogs, alien creatures capable of biting into and devouring nearly anything. When he attempts to implement a solution for cleaning up massive industrial waste sites, Conroy becomes targeted by ecological terrorists who resent the use of alien technology (living or otherwise) to heal the Earth. But kidnapping and the destruction of his corporate headquarters are the least of Conroy’s problems.

An unknown, telepathic intelligence has begun invading his dreams, warning of geological disasters that hinge on what Conroy does next. Further complicating his life are several groups of aliens, each believing that he has a special destiny to fulfill, though they don’t necessarily agree on what it is.

Accompanied by his pet buffalito, Reggie, Conroy must elude terrorists, confound alien zealots, withstand temporal distortions throughout the former state of Texas, and explore ancient Mayan ruins. His adventures will result in his reunion with a long-dead relative, a chance to experience the world’s greatest sandwiches, exposure to alien bliss, a battle with a megalomaniac on the slope of an active volcano, and a trip to the asteroid belt for a final face-to-face confrontation with the creature that had been invading his dreams. Somewhere in the midst of it all, he has to find his true destiny.

Engaging and fun. Quite a romp. I hadn't read/listened to others in series, but will now.

Reminiscent of a SNL: "What's up with that" sketch". There is a plot that weaves through an almost carnival setting. Some are funny; but it's a little exhausting. I kept thinking that maybe Larry should get off of that stuff.

not worth a credit

Was hoping this would be similar to a john scalzi novel. It's not. Schoen has some interesting ideas, but they're never allowed to take root.