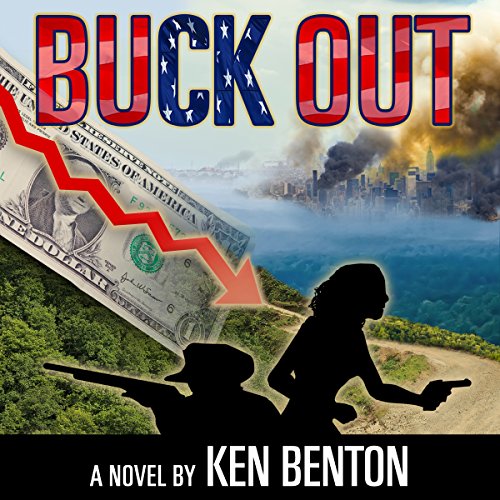 Malcolm Carter and Ryan Boone, two New York City friends whose lives have been dominated by the financial markets, are about to exchange their charts and reports for guns and survival supplies - but not because they want to. When China and Japan decide it's time to dump US Treasury bonds, an economic nightmare plays out in America. The Federal Reserve watches helplessly as the dollar is decimated, and the resulting food shortage spreads lawlessness across the land like a virus.

Malcolm is a successful day trader who always needs to make one more score before he'll listen to Ryan and diversify some of his assets into real estate or gold. He figures an impressively larger bank account might be the only way he can lure his Secret Service agent ex-wife back.

Malcolm finally hits it big by aggressively shorting bonds when the market crashes but waits too long to invest in tangibles. All that newfound money suddenly won't buy him a bar of gold, a pint of beer, or a minute of Hannah's attention - especially when she's in the field chasing down a former counterfeiting gang.

As luck would have it, Ryan turns out to be a closet doomsday prepper. The two of them attempt to escape the chaotic Big Apple and reach Ryan's land in West Virginia, supplied by only the contents of Ryan's bug-out bag. But it's not going to be an easy journey. Traveling has become difficult and dangerous. Malcolm learns he must redirect the same tenacity that helped him beat the markets toward staying alive on the road...and, hopefully, finding Hannah.

Yes..It's a good story with a believable situation and characters you end up caring about...draws you in.

What other book might you compare Buck Out to and why?

WANTED by Jason...something... was the best SHTF ( You know what hits the fan ) story I heard before this but it was much darker than this one. Both are good but I would rate this as the better of the two and certainly the best such book I've read..or heard.

I don't think so...but will look for him again. Just did his job and did it well... and yes, I am a Patriots fan...living in New Hampshire, what do you expect? :)

Buck Out - End or Beginning?

This story was different than most end of civilization novels but in a very good way. It wasn't all doom and gloom, and society doesn't totally crash in one day. In fact, it has a hopeful ending..maybe leading to a squeal, I hope.

Best of its type

Would you listen to Buck Out again? Why?

No..been there, done that. Would read a sequel, if there is one.

Malcom..reminds me of myself a bit.

I thought they were all pretty good but I especially liked the minister.

I'd read a lot of these "when the s... hits the fan" type of books. So far, this has been the best. Good plot, good premise and very believable characters. I am retiring soon and may look for a plot of land in the sticks like Malcolm did. This whole scenario was too real for comfort.

Would you listen to Buck Out again? Why?

Probably not but hoping the author writes a sequel.

Yes...kept going from one "cliff-hanger" to another and actually "fleshed out" the bad guys...even felt bad for one of the them when he got his just desserts.

Where the camped out and met the Baptist minister. Although he was a fairly minor character, he was very well done...and the reader did a great job with his voice.

Title of book sounds fine to me

I'm a stockbroker and found the events leading to financial chaos well done and, unfortunately very possible. I'm also a fan of suspense novels and "what if" scenarios so I really enjoyed the rest of the book as well. Too bad this is the only audio book by this author.

Glad I stuck it out. Terrific story.

What did you love best about Buck Out?

The flight from the city on motor cycles.

Did a good job with all the characters.

Meeting of Malcolm and Hannah.

The first chapters involved a conversation between two Asian countries about the stock market. I was afraid I was going to be bored. However, it rapidly got interesting and when the story moved back to the states, the creation of the character's was superb and the writing was wonderful.

What did you love best about Buck Out?

Story was even better than the other book I heard by this author and the narrator was MUCH better.

At the farm where the National Guard, with Malcolm and Ryan, foil the bad guys trying to drive away with all the food.

I thought they were all good and, as I said, he was much better than the reader of SurviRal, the first book I got by this author.

Both ... in different scenes.

My wife and I listened to this on a long car trip and she loved it and...she is VERY picky.

Great Book...Very believable story. I grew to like the characters.

It was well written and well read.

Yes. It starts with a detailed description of the turmoil created in the financial markets that is provoked by a China/Japan sell off of of American Bonds. The author obviously knows his way around the markets and the story evokes the possibility of a devaluation of our currency after a financial crisis. Makes it very believable. Once the "s" hits the fan, then it turns into a suspense/thriller and it's definitely seat of the pants time.

No. Not the best I've ever heard but he was pretty good...above average, I'd say. Most reviews of him are positive but one or two did not like his style so I would suggest you listen to sample and judge for yourself.

Very good book. One of the best I've heard.

If you could sum up Buck Out in three words, what would they be?

Malcolm and Ryan's flight from the city to the "sticks" and their adventure along the way.

When Malcolm finally reunites with his wife.

Very good story and well read. Five stars all around.

Malcolm...a man with a conscience and one true love.

No, but I liked his narration.

When the dollar hits the fan.

Book started off with a detailed description of the turmoil in the financial markets, due to China and Japan dumping huge quantities of American Bonds. Author obviously knows his way around the markets. Besides being a good story is serves as an education about the possibility of a devaluation of our currency after a financial crisis.

What other book might you compare Buck Out to and why?

"Wanted" by Jason..somebody...That was pretty good but much darker.These characters are much more likable and there is some hope at the end.

Good reader and did nice job with voices. Have not heard him until now but will put him on my list of "good ones."

This was a very good story with a terrifying premise because it seems so real. The end of civilization comes not through a super-disease or the bomb but because of a financial melt-down. Really made me think about how I might want to change my portfolio that now relies so much on the health of the US dollar.