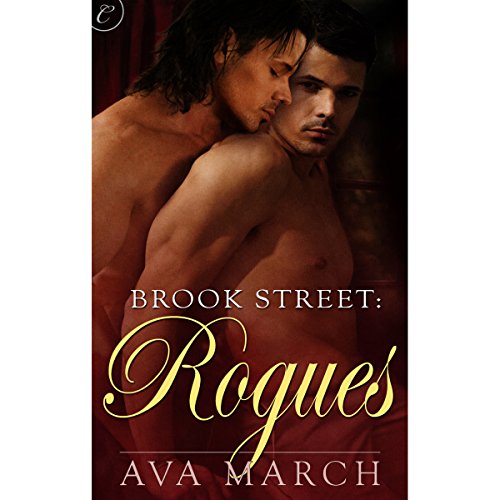 Two of London's most notorious rakehells, Linus Radcliffe and Robert Anderson, are the best of friends. They share almost everything - clothes, servants, their homes, and even each other's bed on occasion. The one thing they don't share: lovers. For while Linus prefers men, Robert prefers women... except when it comes to Linus.

As another Season nears its end, Robert can't ignore his growing jealousy. He hates watching Linus disappear from balls to dally with other men. Women are lovely, but Linus rouses feelings he's never felt with another. Unwilling to share his gorgeous friend another night, Robert has a proposition for Linus. It's a proposition Linus flatly refuses - but not for the reasons Robert thinks. Still, Robert won't take no for an answer. He sets out to prove a thing or two to his best friend - yet will learn something about the heart himself.

Would you try another book from Ava March and/or B. Townsend?

I would most defenitly purchase another book by Ava March. This series is one of my favorites that I have listened to in a while. I will only purchase to book however if it is NOT read by B. Townsend. The inflection in his voice is all wrong for this book. You can hear so much of his breathing while telling the story and it so distracting. Belmont that read the first two books in this series is probably my favorite reader that I have found on Audible and adds so much to the stories that he is telling.

I'll just read it myself

I honestly can't appreciate the narrator's voice. The performance really killed it for me & I couldn't make myself finish.

Would you listen to Brook Street: Rogues again? Why?

No! The narrator killed this entire story for me. I only got through it the first time because of it being the third part of a trilogy.

He makes the characters sound like they are in their 60's and not their 20's. He also makes it very difficult to tell who is speaking and really just put me to sleep.

I will never buy a book, no matter the author, narrated by B. Townsend again. Lesson learned.

It's all about the narrator

Maybe the book itself was worth an additional star, but the narrator killed it for me. The fluctuations were there, but the different voices were not. The narrator for the first two books was superb. I listened to to all three books back to back. The change was just not a positive one for me.

I liked the story a lot, as I always do with an Ava March story.
This narrator though I had a hard time enjoying his performance. Pauses at rather awkward times in a sentence. Too many audible breaths. I just wasn't a fan. No mispronounced words. But the awkward pauses were frustrating to listen to.

Like its predecessors this book has a good concept but keeps a simplicity that prevents it from being anything other than an 'OK experience'. Anderson and Radcliffe have been fuck buddies for a decade. Both are notorious man-whores. But Anderson decides he wants to be exclusive with Radcliffe. A lot of non-conversation happens. They finally have a conversation and then HEA. Pretty simple plot. Yeah, I see now why this series was free on Audible Escapes

Why just why couldn’t the same narrator read this one as the other two books? This B Townsend ruined the ending to a good series. I wish authors would realize a narrator can make or break a perfect book. Sorry the narrator ruined this one. Why couldn’t Charlie Belmont do the last? Not worth the money or time. 😐 sorry

This was a nice love story. I thought the narrator was okay, but not outstanding like others I have heard.

Slow to get started, but it gets there in the end

I’m not sure why the change in narrator, but I suppose there must have been a reason. Disconcerting in a series, though, although not as much as it might have been if there were a big overlap in characters.

I got to about….maybe, a third of the way in, and I thought “I don’t think I can do this book”. I was having trouble with the two characters. First of all, I was mixing them up because their “voices” weren’t very different, and I couldn’t figure out what their problem was. And they each had a problem – I just didn’t get what it was, or why.

And then it suddenly started to get better. The conflict actually cleared up some things. And as it turns out, the problems are major themes in gay life. Good one! Once things started to become clearer, I really liked the story. Very touching in fact.

I’m not sure how other readers felt about the narrator (I haven’t read the reviews), but although there is some work to be done, I hope he continues. He has a lovely voice – just needs to work on the inflections a bit.

OMG! This narrator gave me an actual headache!