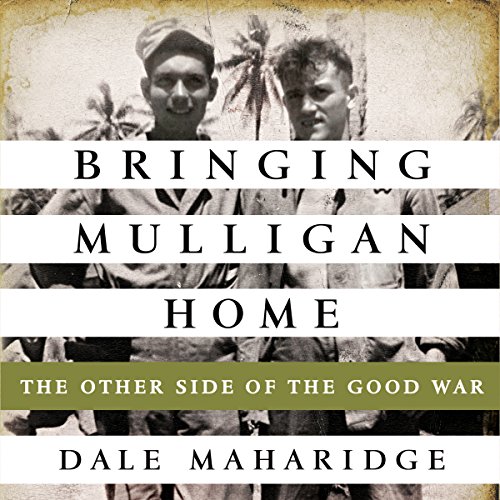 "A powerful narrative of the dark side of American combat in the Pacific theater and the persistence of resulting injuries decades after the war ended." ( Kirkus)
"Through deep and sensitive interviewing, Dale Maharidge has achieved what many have previously thought impossible: He has opened up the 'silent generation' of World War Two veterans and enabled them to tell their stories. These veterans...break your heart and win it all at once.... An entirely fresh look at 'The Good War' that may well change our view of it forever." (Helen Benedict, author of The Lonely Soldier: The Private War of Women Serving in Iraq and Sand Queen)

Sgt. Steve Maharidge, like many of his generation, hardly ever talked about the war. The only sign he'd served in it was a single black and white photograph of himself and another soldier tacked to the wall of his basement workshop.

After Steve Maharidge's death, his son Dale, now an adult, began a 12-year quest to understand his father's preoccupation with the photo. What had happened during the battle for Okinawa, and why had his father remained silent about his experiences and the man in the picture, Herman Mulligan? In his search for answers, Maharidge sought out the survivors of Love Company, many of whom had never before spoken so openly and emotionally about what they saw and experienced on Okinawa.

In Bringing Mulligan Home, Maharidge delivers an affecting narrative of war and its aftermath, of fathers and sons, with lessons for the children whose parents are returning from war today.

Best true life account of the far east battles during WWII. Stories told by the real men who were there.

Great writing style and content from a guy who talked to a lot of WW2 vets. Stories are solid. However... The author tends to dip into his personal politics a bit too much while telling a story that doesn't need them. Particularly, his comparisons of WW2 and the Global War on Terror in terms of American efforts to avoid civilian casualties are way off the mark.

This is an outstanding combination of journalism and history. I highly recommend it for anyone in an interest in war especially the theatre of the Pacific war. The author is truly a humanist and avoids seeing the past in the propaganda of the time.
The author's dad who was a marine sometimes was inflicted to fits of rage while he grew up. "I didn't kill him, they blamed me" he would sometimes scream while he worked in his workshop while a picture of his dad and a war buddy hung above his fathers work bench. After his dad passed away the author in attempt to put to sleep not only his dads ghosts, but his as well, goes on a quest to discover who is the man in the picture and what was the war that shaped his dads life, and the authors as well. This book will make you question the notion that there are "good wars".