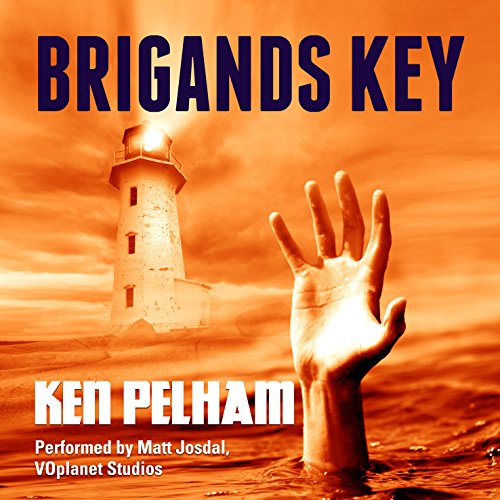 Brigands Key is "a perfect storm of menace...breathtaking!" ( The Florida Weekly)

Death sweeps in off the Gulf of Mexico

An ageless, impossible corpse at the bottom of the sea. A lethal plague. A ruthless murderer. A monster hurricane. Archaeologist Carson Grant came to Brigands Key to escape the limelight and repair his shattered reputation and finds himself instead staring down the Four Horsemen of the Apocalypse.

Where does Brigands Key rank among all the audiobooks you’ve listened to so far?

Brigands Key ranks up there with other mystery/thrillers in terms of characterization, setting and action. The voice performance was quite good, too.

What other book might you compare Brigands Key to and why?

Brigands Key is comparable to the stories of Randy Wayne White and Clive Cussler.

Have you listened to any of Matt Josdal, VOplanet Studios’s other performances before? How does this one compare?

No, this was the first.

It was filled with tension and suspense.

Ken Pelham’s Brigands Key roars across the pages with the force of a hurricane. When Carter Grant discovers a fresh water spring bubbling up in the Gulf of Mexico, off the coast of historic Brigands Key, he unwittingly releases a murderous plot that began in the waning days of WW II. As the body count rises, Grant and the besieged residents of the small island community are forced to deal with a lethal plague, backstabbing politicians, and a military-enforced quarantine. Can it get any worse? Not if you don’t count the Category 5 hurricane storming toward Brigands Key. With flashes of humor and Pelham’s technical mastery of the natural sciences, the pages fly by as though chased by typhoon winds. The narration is effective, the writing crisp and vivid.

Unlock the secret of Brigands Key

Would you consider the audio edition of Brigands Key to be better than the print version?

Both are excellent, so it's a matter of personal preference, although Matt Josdal's performance in the audiobook was particularly riveting.

What does Matt Josdal, VOplanet Studios bring to the story that you wouldn’t experience if you just read the book?

He knows how to keep the tension high in thrilling moments (of which there are many). His timing and tone are spot-on.

Unlock the secret of Brigands Key.

Brigands Key is a brilliant edge-of-your-seat thriller that will keep you guessing until the end. What starts as a scuba dive off the shore of a sleepy fishing town turns into a tale of sunken treasure, power brokering, and intrigue. Small town politics in the community of Brigands Key heats up when a land developer pushes the council to allow construction of high-end homes. When an opposition council member goes missing, foul play is suspected. Things take a darker turn as the residents start dying to a mysterious illness. Then the army is called in to quarantine the island on the eve of a catastrophic hurricane. With Brigands Key at risk of being wiped out by plague, storm, and developers, a motley group of friends race the clock in search of a hidden treasure and a way to save the community. Pelham delivers. The plot is deliciously twisted. The action sequences are white-knuckle tense. The cast of characters is varied and engaging, from the computer whiz-kid to the adventurous archeologist a la "Indiana Jones". There is more to Brigands Key - the town and the book - than meets the eye. It's an excellent read.