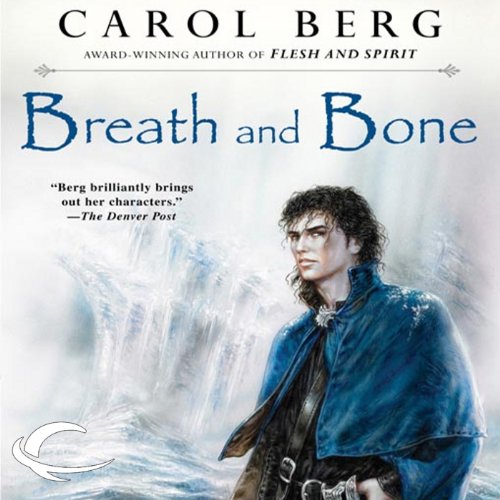 Everyone in Navronne seems to be after Valen. There is the fanatical Harrower priestess, Sila Diaglou, who wants to raze the kingdom. The Bastard Prince Osriel, who steals dead men's eyes. And the Pureblood Registry, determined to keep every pureblood sorcerer in thrall. Even beings out of myth, the Danae guardians, whose dancing nurtures the Earth and whose attention could prove the most costly of all.

As Navronne sinks deeper into civil war and perilous winter, Valen finds himself a bargaining chip in a deadly standoff. Doomed to madness by his addiction to the doulon, and bound by oaths he refuses to abandon, the young sorcerer risks body and soul to rescue one child, seek justice for another, and bring the ailing land its righteous king. Yet no one is who they seem, and Valen's search for healing grace leads him from Harrower dungeons to the very heart of the world. In the twilight of a legend, he at last discovers the hard truth of the coming dark age and the glorious, terrible price of the land's redemption...and his own.

Who would you have cast as narrator instead of Allen O'Reilly?

What character would you cut from Breath and Bone?

i loved the story, loved the writing, shouldn't have bothered with audio book, could not get through it

One of my very favorite books, Workable narration

I avoided this book, as well as the first in the series, after hearing the preview and hearing other reviewer's cautions. I can't tell you how much I adore the books though, and always thought they'd do well on audio. I'm glad I took a chance. Though I don't recommend allowing these audiobooks to be your first experience, if you already love the books, the narrator is workable. The trick? Slow down the reading speed to .8x instead of 1x. He still mispronounces and stumbles sometimes, but at least you can absorb the prose and pacing. I even started to look past the imperfections and enjoy his voice. He's not a perfect narrator, but certainly workable with some adjustments, especially if you already adore the story.

This book, like its prequel Flesh and Spirit, is a superb piece of intricate and dark fantasy. Carol Berg delivers a multidimensional plot with intriguing characters that will leave you wanting more. I highly recommend this book and its prequel to all fans of fantasy.

However, the narration, as with the prequel, is not what I would have wished. The pacing seems, to me, a bit awkward. There are multiple mispronunciations of words and hesitations that make it seem as though the narrator doesn't understand the meaning of some of the words he is reading. This isn't really a glaring issue and many people may not even notice, but it did bother me. Having said that, I still wholeheartedly recommend this series on the strength of the story alone.

If you love Valen, don’t be put off from listening to this. But if you are not familiar with this series, please read it first. Carol Berg is a master, and Valen is one of my favorite characters. But the narrator is simply a reader, not a performer. As others have said, odd pauses, mispronunciations. These books were my introduction to this author of whose books I have read all. I just wish these could be re-recorded by a master performer as befits their content.

I listened to this with great pleasure ; excellent to "re-read" one of my favourite books. Romantic, exciting, spiritual, and with nature as a key theme. Wonderful.

I have read and reread these books many times over the years, and I love them. So I was very pleased to find them on Audible. I bought them a while ago, and couldn't listen to them, as the narrator is awful, and I returned them after listening to about half an hour of the first book. I'd forgotten that I had tried to listen once before, and as I'd just finished listen to Dust and Light and Ash and Silver, the Sanctuary duet, magnificently narrated by MacLeod Andrews, I decided to buy these two books again. If only Mr Andrews had been the narrator of these two books all would be well. Sadly we have Allen O'Reilly, who seems to think he must finish reading the book in record time, and offers no characterization, so that it is impossible to tell which character is speaking. My memory may be poor, hence my purchasing these books again, but my opinion of the dreadful narration hasn't changed. If only Audible would request that MacLeod Andrews narrate these two books and re-release them, I would be more than happy to purchase them for a third time, and would definitely keep them.