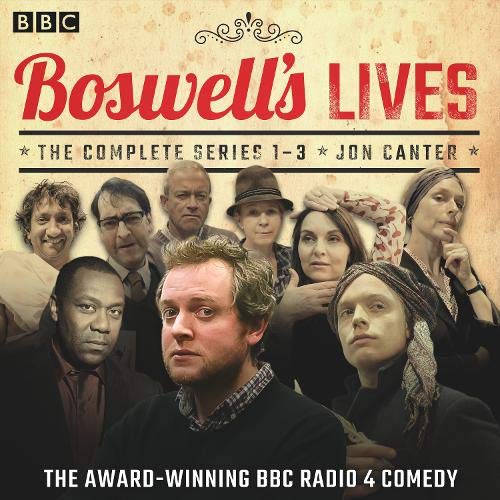 Miles Jupp stars as James Boswell, Dr Johnson's time-travelling biographer, with a host of top actors and comedians as his celebrity interviewees.

Before James Boswell penned a biography of his friend, Dr Johnson, they were both nobodies. But his Life of Samuel Johnson made them famous - so now Boswell's out to work his magic on other celebrities. Travelling through the centuries, he gives 12 legendary figures the Boswell treatment, hoping to do for them what he did for Johnson....

Series one sees him attempting to write a biography of Sigmund Freud (Henry Goodman) - but it's Freud asking all the searching questions. Talking to Maria Callas (Arabella Weir), he gets up close and personal with her poodle; encountering Harold Pinter (Harry Enfield) he receives his very own 'Pinter pause' and, trying to beat Boris Johnson (Alistair McGowan) at whiff-whaff, he finds he's facing a fiendish opponent.

In series two, Boswell tries to help Muhammad Ali (Lenny Henry), who's been banned from boxing and is in the wilderness. Interviewing Karl Marx (Julian Rhind-Tutt), he finds himself collaborating on Das Kapital, but on meeting Madonna (Debra Stephenson), he struggles to get into the groove. And will he succeed in immortalising Alan Bennett (Alistair McGowan), or will they simply be talking heads?

Series three finds Boswell buttonholing Lord Byron (Freddie Fox) to find out if he's really mad, bad and dangerous to know; receiving some lessons in equality from Simone de Beauvoir (Amelia Bullmore); becoming involved in a murder mystery with Agatha Christie (Vicki Pepperdine) and attempting to become a better man under the guidance of Gandhi (Phaldut Sharma). But abstinence drives him to distraction - and worse....

Created by scriptwriter and novelist Jon Canter, this engaging, entertaining series won the 2015 Best European Radio Fiction Series or Serial of the Year at the prestigious Prix Europa.

It was very slow and dry. I expected a laugh but it was not for me.