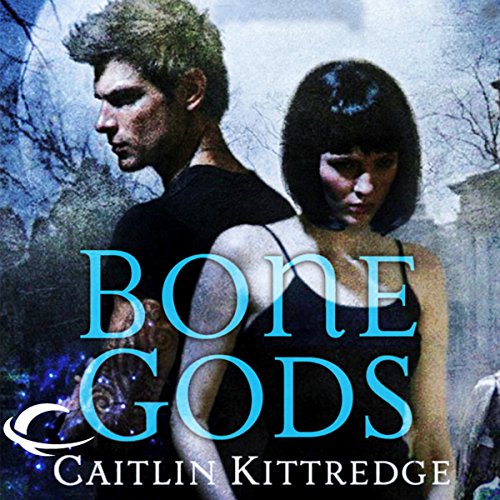 Witch hunts are on the rise and supernatural turf wars are reaching a boiling point. Then, just when it seems life couldn't get any worse for Pete, Jack reappears but he's no longer the man she's always known. Hell has changed him forever. And he's brought back with him a whole world of trouble. A cabal of necromancers are using ancient, unspeakable magic to turn the tide of war in their favor. Then, as the city is about to sink into chaos, Pete receives a chilling directive: To end the war, you must kill the crow-mage. Beset from all sides, Pete finds herself turning to an unholy source for help even if doing so could destroy Black London and life as she knew it once and for all.

I stopped listening after about an hour

What disappointed you about Bone Gods?

The story started out promising with an interesting premise and the promise of adventure. That lasted about ten minutes. I listened for another fifty minutes or so before I admitted to myself that nothing interesting had happened since the glimmer of a good story at the beginning and there didn't appear to be anything interesting coming up any time soon.Now, I do like the occasional swearing by a character when it makes sense for her to do so, but when there is so much unnecessary swearing, it actually becomes distracting. The main character, Pete, swore so overly much that it made you wonder if the author was trying for a shock factor to cover for a boring story. It didn't work if that's what she was doing.

Would you ever listen to anything by Caitlin Kittredge again?

No. Definitely not. No.

Terry Donnelly really didn't have enough range for the different types of voices she needed to do. She had an interesting voice for the main character, but her male voices weren't very convincing and her carribean (?)/cajun(?) accent was terrible.

If you could play editor, what scene or scenes would you have cut from Bone Gods?

All the drivel about missing her boyfriend, Jack. I knew she was in mourning over his departure, but she carried on and on and on......

Maybe the book got more interesting as it went along, but I was too bored and too tired of the swearing and bemoaning done by the main character, that I really didn't care.