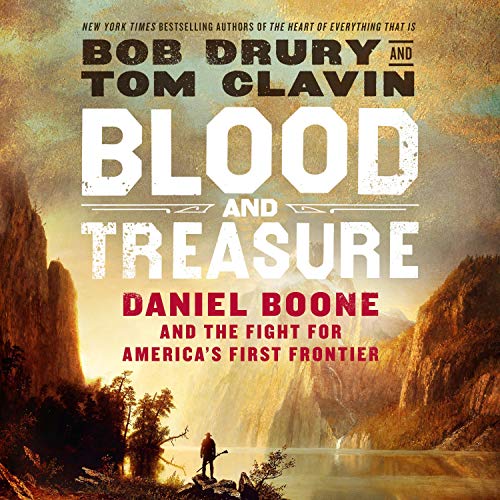 The explosive true saga of the legendary figure Daniel Boone and the bloody struggle for America's frontier by two best-selling authors at the height of their writing power - Bob Drury and Tom Clavin.

It is the mid-18th century, and in the 13 colonies founded by Great Britain, anxious colonists desperate to conquer and settle North America’s “First Frontier” beyond the Appalachian Mountains commence a series of bloody battles. These violent conflicts are waged against the Native American tribes whose lands they covet, the French, and finally against the mother country itself in an American Revolution destined to reverberate around the world.

This is the setting of Blood and Treasure, and the guide to this epic narrative is America’s first and arguably greatest pathfinder, Daniel Boone - not the coonskin cap-wearing caricature of popular culture but the flesh-and-blood frontiersman and Revolutionary War hero whose explorations into the forested frontier beyond the great mountains would become the stuff of legend. Now, thanks to painstaking research by two award-winning authors, the story of the brutal birth of the United States is told through the eyes of both the ordinary and larger-than-life men and women, white and red, who witnessed it.

This fast-paced and fiery narrative, fueled by contemporary diaries and journals, newspaper reports, and eyewitness accounts, is a stirring chronicle of the conflict over America’s "First Frontier" that places the listener at the center of this remarkable epoch and its gripping tales of courage and sacrifice.

“Bob Drury and Tom Clavin together have given us a half-dozen elegantly written narratives of exhilarating episodes in American history. [Blood and Treasure] may be the authors’ finest work to date. Redolent of time and place, a raw and rugged tale.” (Wall Street Journal)

Boone kept returning to explore dense forest, north and south but always west and in the opposite direction of farm land. Apparently, he had a gentle disposition. He didn't argue with others or blame them when things went wrong. He stayed with his wife without resentment after, because of a long absence, she became pregnant by another man. The authors show Boone's philosophical nature, really makes an impression.

There's one story after another in chronological order, and you can see how difficult life was for all on the frontier, everybody. But people carried on. If you were one of those moving west, you just didn't care what others thought of you; you'd be learning new survival skills.

Narration is correct, appropriate for the story, transported me start to finish. It's not my first book by these authors, probably won't be my last.

Whether you are descendants of the first pioneers or not, this is a great tale of our history as we settled the Western Territory. I learned so much and highly recommend this book.

One of the most thrilling books I have ever read. Nonfiction always surpasses fictional stories.

I like everything about it, narrator was spot on and the story compelling...wouldnt mind double length filled with just small anecdotes

Enjoyed many parts of the book. Did not enjoy the "woke" 21st century perspective. Both sides did terrible things. Just tell it like it was and leave it at that.

I really wanted to love this book! I do not know if it I was the book, or the performance, but I just had to stop. Being from East Tennessee, I have it my best shot.

So much wonderful history - and vocabulary!

I learned so much history I have never heard and I read a lot of historical books. If you love vocabulary you will love this book. The authors use many words I have not heard before as well. A great listen.

Has a boy growing up in Western Davidson County NC along the Yankin River learning the stories of Daniel Boone i enjoyed the book Alot of the stories I heard was based on legend not on fact. Daniel Boone was really an explorer. One thing that stands out I my mine with all his explores the man lived to be 85 years old.

About 30% of this book was actually about Daniel Boone. The rest was American/Indian history that was hard to follow.