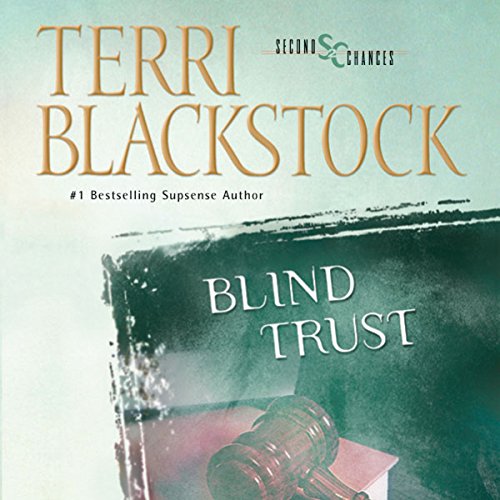 Two weeks before he was to marry Sherry Grayson, Clint Jessup disappeared without a trace. Now, suddenly, eight months later, he's back with no word of explanation. Only an impossible request: trust him. Trust him despite the devastating past...and an inexplicable and increasingly frightening present.

Whatever secret Clint is hiding, it's changed him. And it's about to change Sherry, sweeping her and Clint into a terrifying whirlpool of pursuit and intrigue - one where death and deliverance teeter on a razor edge of circumstance that can either restore or forever destroy Sherry's faith not only in Clint, but in others, and perhaps in God himself.

Blind Trust is part of the Second Chances series by award-winning suspense novelist Terri Blackstock. Combining fast-paced reading with realistic characters and situations, Second Chances takes readers to where the conflict between good and evil becomes the proving grounds of faith.

I cannot imagine any adult thinking this storyline would be believeable, characters have no depth and whine incessantly.

What was most disappointing about Terri Blackstock’s story?

I've enjoyed many of Terri Blackstock's book and was very excited to see so many on Audible.com. The characters of the story were not believeble and the storyline was too predictable.

Who would you have cast as narrator instead of Sandy Burr?

ANYBODY! Kris Faulkner did a fairly good job with When Dreams Cross..

What character would you cut from Blind Trust?

While I understand this book is a work of fiction, it does not compare to the other books that this author has written!

This is the first novel by this author that I have listened to. And it will be my last. The whinny female lead charactor made it hard to really get into the story.

I usually love Terri's book, but i got really tired of Sherry Grayson whining, self-centeredness... my heavens... I'm surprised Clint would still want to marry her for the way she carried on... She needed to give it a break

Although I definitely appreciated the underlying Christian message and the clean story, I simply could not tolerate the female lead character. The author created a self centered and self serving character and that spoke cruelly and unkindly and believed the worst about the male lead for 95% of the book. I found myself not cheering for things to work out between them.

This was a bit strange having the main character go from grief to fear to love. Too many twists that made no sense.

What a test of faith and forgiveness

Beautiful story, and Sandy narrated beautifully! I am really looking forward to the next story (the last in the series)

Love the book. Only thing is sometime the wrong name is said. Should say clint and I would hear cliff

engaging story from opening scene to the end.

YES! This story had drama, emotion, good character development, a well thought out story line and you really felt drawn into the story.

mix of drama and then growing relationships with main characters.

Which character – as performed by Sandy Burr – was your favorite?

She did a good job with the voices, even the male voices. They were distinguishable from one another. I liked Clint.

If you could take any character from Blind Trust out to dinner, who would it be and why?

Clint was honest, trustworthy and put God and his plan above himself. This is an admirable quality.

Great read or listen. Author did a wonderful job with this book.

What was most disappointing about Terri Blackstock’s story?