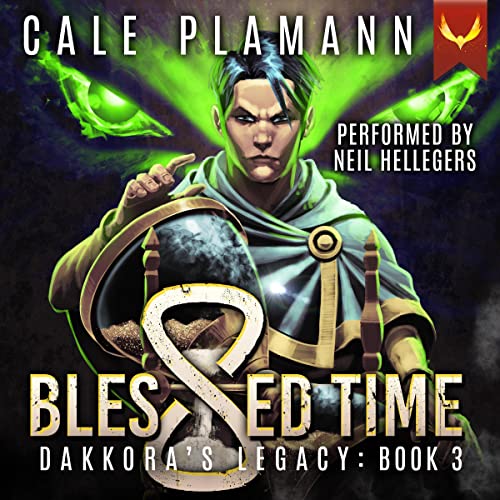 A new threat arises, and time itself may not be enough.

Retirement or polite exile. Whatever you want to call it, it had been kind to Micah Silver. He had saved his home of Basil's Cove at the cost of his reputation, leaving the country to avoid further complications and settling into the comfortable life of a guild master, running a small but elite adventurer's guild.

When war and nefarious forces split the realms, Micah dives into the breach once more, confident in his stupendous magical power and time magic will keep him and his friends safe. It won't.

He fails, and a new enemy with a familiar face has followed him back into the past, wreaking havoc on the timeline. Now Micah's only chance comes in the form of a map, guiding him halfway around the world to the laboratory of the greatest wizard that ever lived. If he's going to have any chance in the coming confrontation, he will need to arm himself with the powerful artifacts she left behind.

But his enemy knows the location of her laboratory as well, turning his quest into a deadly race with consequences for all life on Karell.

Book three in a time-loop LitRPG series where a reluctant hero is forced to fight against an impossible catastrophe...over and over again. Grab your copy today!

It completely fell off for me.

I really enjoyed the first two books but I feel like the MC's advantages got to the point that the villan at this point just felt, well kind of ridiculous. Everything just felt scripted in a really bad sort of way. A good story will immerse you in what's happening and I found that to be true of the first two books. I found myself just angry and disappointed with essentially the entire third book on the other hand.

First of all Neil Hellegers is an amazing narrator. Perfect job.

Right at the start of the story we are dumped into the middle of the action in a confusing scene. Micah is in way over his head and is going to need to go 10 years back in time because of course he does, that's what this whole series is about. Premise of the book gets explained, yada yada. I don't know. I really didn't feel the story of those one and really wasn't drawn into it as much. To make it worse, the story doesn't wrap, but it's not exactly a cliffhanger.

Also, these massive character profiles are nice on paper, but they're terrible on audio. In a book this short, one near the beginning and one near the end would be fine.

Love the LGBT+ representation in this books story so far. They are just a brother and his lover~
If you like LitRPG and wanted to listen about to dads and they’re family…. As a side note to the MC’s story. Check this one out.

We get to see Micah as an adult really coming into his powers. This book was a great next step on Micah's journey and he and his friends are coming into their own. The magic system is great and having the main character be a chronomancer is such a welcome change to the typical wizard/mage. Exciting battles and awesome use of time travel. Highly recommend this series.

I've been enjoying the series up until now, though there were signs of story fatigue towards the end of the book 2, but I figured I would give the series one more go. Alas, this one falls short. The relationships feel programmed rather than natural, the conflict feels Marvel-esque with flat humor that rings hollow.

Maybe it's just me, but I just got bored and felt more relief it was over than sadness it had finished by the end of the book. I hope others have a better time with this one than I did.

A fantastic continuation of the series, I'm intrigued on where it will go in the next book. I do miss that time travel takes a lesser role in this book compared to others.

i enjoyed the first 2 books and thought this was fun as well. i cant wait until book 4 out to see what happens next.

It falls in line with the quality of the first 2 books. The end seems a bit rushed sadly, but the main states that as well.

You’re not really missing out anything if you skip this book. Book one was very well written. Unfortunately book 2 and 4 is this a steady decline down.

Story was slow to find itself, finished better.

The first 2 books were fantastic imo and I was looking forward to seeing where the story was going... however the author just sort of thrust us into a new massive problem skipping a ton of time in-between the last book and this one.

The best part of these books is following along the whole way up until he needs to restart! We like to see him learn and get stronger... but because it begins at a restart... we miss a ton of progression, and he's just god-like the entire story! I liked the demon's time traveling curve ball... but I'm not as big a fan of this book in general.

Worth a listen though since the ending is pretty fun and surely has a cool sequel.

A good third entry to the series, and great listen

I really recommend this book if you have listened to the rest of the series. The stakes are rising quite rapidly due to a load of new problems for our heroes to encounter. I really enjoyed the pacing of the book. It progresses at a steady pace and doesn't ever feel like it has lingered in any place for too long. In terms of characters, I think there is a healthy mix of old and new. All of the new characters are good additions to the story and are a nice change. Also, I have never been a fan of time travel as a story trope, but I have really enjoyed its use in this series so far.

Looking forward to the next entry in the series.