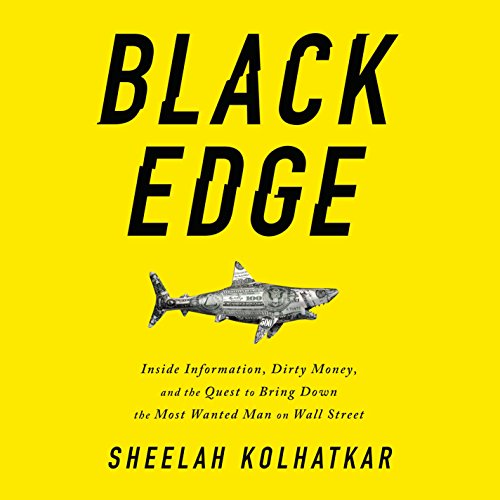 "Fast-paced and filled with twists, Black Edge has the grip of a thriller. It is also an essential exposé of our times - a work that reveals the deep rot in our financial system. Everyone should read this book." (David Grann, New York Times best-selling author of The Lost City of Z)
"A tour de force of groundbreaking reporting and brilliant storytelling, a revealing inside account of how the Feds track a high-profile target - and, just as important, an unsettling portrayal of how Wall Street works today." (Jeffrey Toobin, New York Times best-selling author of American Heiress)
"Well-written, with pointed characterizations of the ambitious players and their motives, this book is highly recommended for readers interested in finance, crime, and politics." ( Library Journal)

The story of the billionaire trader Steven A. Cohen, the rise and fall of his hedge fund, SAC Capital, and the largest insider trading investigation in history—for readers of The Big Short, Den of Thieves, and Dark Money.

The rise over the last two decades of a powerful new class of billionaire financiers marks a singular shift in the American economic and political landscape. Their vast reserves of concentrated wealth have allowed a small group of big winners to write their own rules of capitalism and public policy. How did we get here? Through meticulous reporting and powerful storytelling, New Yorker staff writer Sheelah Kolhatkar shows how Steve Cohen became one of the richest and most influential figures in finance—and what happened when the Justice Department put him in its crosshairs.

Cohen and his fellow pioneers of the hedge fund industry didn't lay railroads, build factories, or invent new technologies. Rather, they made their billions through speculation, by placing bets in the market that turned out to be right more often than wrong—and for this they have gained not only extreme personal wealth but formidable influence throughout society. Hedge funds now manage nearly $3 trillion in assets, and competition between them is so fierce that traders will do whatever they can to get an edge.

Cohen was one of the industry's greatest success stories. He mastered poker in high school, went off to Wharton, and in 1992 launched SAC Capital, which he built into a $15 billion empire, almost entirely on the basis of his wizardlike stock trading. He cultivated an air of mystery, reclusiveness, and extreme excess, building a 35,000 square foot mansion in Greenwich, Connecticut, and amassing one of the largest private art collections in the world. On Wall Street, Cohen was revered as a genius.

That image was shattered when SAC became the target of a sprawling, seven-year government investigation. Labeled by prosecutors as a "magnet for market cheaters" whose culture encouraged the relentless hunt for "edge"—and even "black edge," or inside information—SAC was ultimately indicted in connection with a vast insider trading scheme, even as Cohen himself was never charged.

Black Edge offers a revelatory look at the gray zone in which so much of Wall Street functions, and a window into the transformation of the U.S. economy. It's a riveting, true-life legal thriller that takes readers inside the government's pursuit of Cohen and his employees, and raises urgent questions about the power and wealth of those who sit at the pinnacle of modern Wall Street.