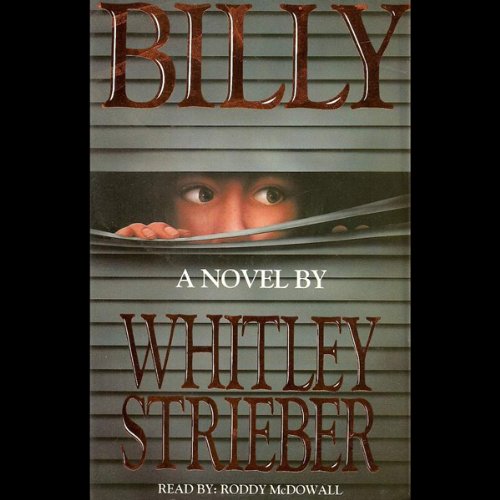 A chilling tale that could only come from the pen of the best-selling wizard of suspense Whitley Strieber. Here is a story so terrifying it will leave you breathless. Whitley Strieber's newest novel about a young boy who is kidnapped by a deranged misfit is a shocking look into the dark soul of a psychopath. Whitley Strieber is also the author of such novels as Communion and Transformation.
©1990 Whitley Streiber (P)2009 Phoenix

Billy - An old favorite to Audio!

I was looking for this book in Kindle format, when to my delight I found it here, and narrated (albeit abridged) by the late great Roddy McDowell!

McDowell delivered an outstanding performance for each of the characters, and the villain in particular with a charming nastiness!

I'm not going to waste time with statistics or analyses, except to say that I'm glad I made this purchase.

My only complaint was that the sound quality was not as good as other Audible purchases, but this may have been due to the book being 22 years old, and you honestly can't expect a 22 year old book on tape to have crystal clear sound quality. However, this is why I rated this a 4 instead of a 5.

I intend to listen to this thrilling story many times!

Did not like the reader.I read this book and really liked it,but his accent ruined it for me.

McDowell is great but avoid the abridged story

Roddy McDowell’s narration is so wonderful, and he brings the characters somewhat to life in spite of the shortened story.
He’s the only thing that makes this book to an acceptable listen. The recording is old (by Audible standards) and the production value is pretty bad. The worst thing about the book though is the fact that about 80% of the story isn’t there, and therefore a lot of important nuance is missing.

That’s my opinion anyway. Am I sorry I listened? No, it was short enough it didn’t feel like a complete waste of time, and it was fun to hear Roddy McDowell's voice characterizations. Disappointed? Yes, mildly.

Better than his newer works

I would recommend it if they were interested in true crime or in the study of psycopaths. It is very realistic in terms of desire of unbalanced individuals and the use of torture by kidnappers. Really gets into the head of the kidnapper in a disturbing way. Makes me wonder a little about the author!

In the black room, meeting his "brothers".

Inside every serial killer is his mother. Truthfully I found this a little like the movie "Psycho".

The performance was superb but the audio quality was mediocre. There was considerable rumble, boominess, noise and a lack of clarity. There were some squeals that made me think it was recorded on a cheap reel to reel recorder many years ago. Performance, story and writing 4 out of 5, audio 2 out of 5. I can only say I have heard worse on audible.

Makes you want to hug your child

Which character – as performed by Roddy McDowall – was your favorite?

Whitley Strieber and Roddy McDowell made this story come to life and made me hold my kids a little tighter at night.

I’m a casual Strieber fan. I’m not overly fond of the books I’ve read of his because they’re sorta typical attempts at being best sellers in the 1980s style. They are usually like a blockbuster of the time with naturalistic characters and settings met up with, say, vindictive wolves or aliens - literary Amblin Entertainment stuff. You know whatever, right? BUT Strieber’s success is his ability to pull startling detail that makes you believe absolutely in these far out or even ridiculous scenarios. In Wolfen, Strieber’s party trick is making you believe in how the mind of a wolf works while on the hunt. I didn’t really like the novel that much, but THAT part sticks with me even years later. BILLY is kind of like that, too, albeit on a less fantastical predator. Which is what makes BILLY sort of nuts. It’s about a child abduction.

I am the age of Billy at the time the book came out originally. I recognize the boy’s world. Afterburner the video game. I grew up hearing often about Adam Walsh. Stranger Danger. Constant vigilance and paranoia that at any second a predator could grab you like a boogyman and pull you off the face of the earth forever except for a milk carton.

That’s part of what makes BILLY so vivid for me. It’s also so bravely written and observant. Strieber has to be a little nuts, haha. If you know anything about his background, you already know this. But, man. I can’t imagine what sort of flack he might have gotten for just imagining being the kind of guy who sees children as....well. You know.

I usually avoid abridged novels like the plague. In this case, given the subject matter, I find myself happy it’s not the full novel. I don’t think I could live for long in the world of this child abductor’s world or the terrified boy and his grieving parents.

NOTE: As mentioned by another reviewer, the audio quality SUCKS. I don’t think the age of the recording is a valid excuse. It sounds like a third generation cassette copy. There’s really no excuse for this. Oddly it lends the book an extra layer of unease that sort of works for the material -- like a shadowy horror movie. I might be turning lemons to lemonade there. I’d rather have a clearer copy of this recording.