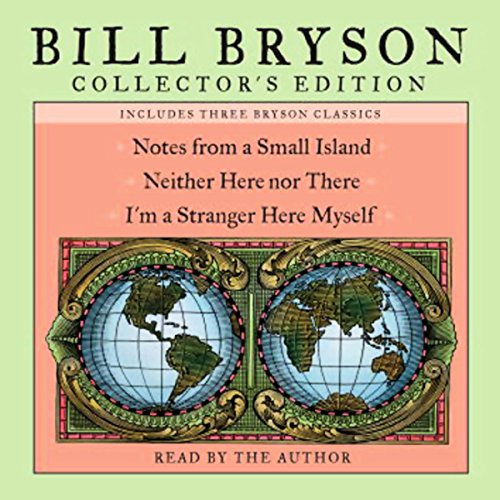 Notes from a Small Island
After nearly two decades in Britain, Bill Bryson decides to move his wife and kids back to his homeland, the United States. But not before taking one last trip around Britain, a sort of valedictory tour of the green and kindly island that had so long been his home. The result is a hilarious social commentary that conveys the true glory of Britain.

Neither Here nor There
Thirty years after backpacking across Europe, Bryson decides to retrace the journey he undertook in the halcyon days of his youth, carrying with him a bag of maps, old clothes, and a stinging wit honed to razor sharpness by two decades of adult experience.

I'm a Stranger Here Myself
Bryson reads "somewhere" that nearly three million Americans believe they have been abducted by aliens; clearly the Americans need him back. So after years of raising his family in Britain with his English wife, the brood moves to the States, allowing Bill to chronicle the quirkiest aspects of life in America as he reveals his own rules for life.

So good I hated for it to end

What did you love best about Bill Bryson Collector's Edition?

The fact that Bill Bryson narrated it. No one else could have captured his style, I don't think.

What other book might you compare Bill Bryson Collector's Edition to and why?

What does Bill Bryson bring to the story that you wouldn’t experience if you just read the book?

He just makes me laugh. He brings so much humor to his travel experiences that he makes you want to go to even the places he did not like.

If I had the time to, I could sit there all say listening to this audiobook.

Love Bill Bryson, every sentence is hilarious. These 3 books have been abridged well, in the sense that you don't feel like you've been ripped off any juicy parts. Worth it for 17 hours of entertainment

A humorist in the Mark Twain tradition.

Great listen! You can start just about anywhere in the recording and enjoy it. Hugely entertaining, and enlightening.

What other book might you compare Bill Bryson Collector's Edition to and why?

So far every Bryson book we've tried has been both a great read and a great audio experience. These include : A Walk in the Woods, A Short History of Nearly Everything, At Home, In A Sunburned Country, and The Life and Times of the Thunderbolt Kid. These make great gifts too - especially for anyone who has a tedious commute or is laid up in bed for any period of time - Bryson' s take on the world is always unique and often laugh out loud hilarious.

I ABSOLUTELY LOVE Bill Bryson! Keeps me in stitches! I have read each of his books several times- when I NEED to laugh.

I've never read anything by Bill Bryson that wasn't good, and this collection of stories of his travels through England is no exception. Love his humor as well as his description of the people and places he has been!

I rarely write reviews and have been a memeber since almost the begining of Audible (sadly when I upgraded Audible forgot who I was before becoming a Platinum Listener). This was a thuroughly enjoyable listen and I found myself drawn to Google Maps over and over trying to equate the top down view with Bryson's on the street descriptions of the people and places.

If you need an in office vacation then I reccomend you download this book and spend your lunches listening to this book and mousing around Google Maps.


My second of three (so far) Bill Bryson books

This is fantastic. I love his tone and mix of trivia as well as fact within history. I'm a true (new) Bill Bryson addict. I especially like his own narration. It feels like you're traveling alongside learning as you go (only you get to shower at home). Totally recommend it to anglophiles, trivia and history buffs of all flavors - as well as general listeners of all kinds. I also liked "At Home" which delves into more history and information based on his English vicarage house. Do it, you'll like it.

These essays are so soothing. They take you on a journey around the world, are funny and sweetly read by Bill. It was amazing how much I agree on his perspective of Europe, the same one I had when visiting the same places, so it was like visiting my old photo album. They were happy trips made with a dearly loved one, so the story was specially significant for me, revisiting very important memories. I cried a bit.
Also, I was a foreigner living in the USA for some years and found myself laughing when he pointed out some of the things we foreigners find incredible and weird of the USA and its people. I also found myself smiling at the wonderful behaviours Americans have, which has made me chose Americans for my best friends.

Which character – as performed by Bill Bryson – was your favorite?

It brought back many important memories.

Whether he's being lovingly critical or unabashedly admiring of English quirks, Byrson is always amusing -- never crass, just constantly chuckling at the English as I chuckle and sigh at the doings of a favorite aunt. Priceless writer, doesn't lose his charm on second or even third listening.

I've read or listened to nearly half of the Bryson's books. No need to mention that I'm a fan of his. This collection is composed of three separate books. The first one is about Britain. I think it's the faintest book of Bryson. Though, it's not bad after all. Maybe it contains too much local information that's too alien to us. It's not about being familiar with Britain. I've never been to Australia for instance, but I loved his book "In a Sunburned Country".

But the others are just brilliant. I bet you'll listen them again and again. The one in Europe makes you feel like you're traveling those places with a best possible travel companion. And the last one will make you understand better what an Ordinary American's life is like.