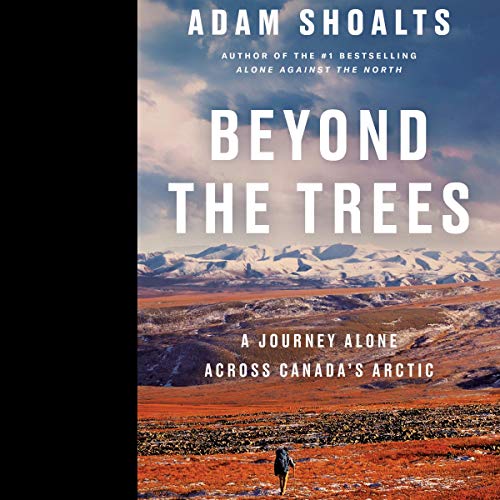 Shortlisted for the 2020 Louise de Kiriline Lawrence Award for Nonfiction

A mesmerizing odyssey through an unforgiving landscape, and the rich history it reveals.

What does it mean to explore and confront the unknown? Beyond the Trees recounts Adam Shoalts's epic, never-before-attempted solo crossing of Canada's mainland Arctic in a single season. It's also a multilayered story that weaves the narrative of Shoalts's journey into accounts of other adventurers, explorers, First Nations, fur traders, dreamers, eccentrics, and bush pilots to create an unforgettable tale of adventure and exploration.

Interspersed with his stories of navigating mazes of shifting ice floes, facing down snarling bears and galloping musk-ox, and portaging along knife-edge cliffs above furious rapids, are the fascinating legends, historic persons, and incredible anecdotes that make up the lore of the North. They include the saga of the Mad Trapper, a man whose feats of endurance and ingenuity were almost as legendary as his violent end; the story of the controversial Vilhjalmur Stefansson, a redoubtable dreamer but also one who was blamed for the deaths of his companions; the tale of the "Lost Patrol" of the Mounties who perished in a blinding blizzard; the formidable Tyrell brothers who together charted much of Canada's North; the eerie ruins of Fort Confidence that was built nearly two centuries ago on Great Bear Lake; and the decaying remnants of gold prospector David Douglas's cabin overlooking the Dease River. The North is indeed a perilous place. Also told in the book is the tragedy of John Hornby and his two companions who starved to death on the banks of the Thelon River; their bones are still resting just above the riverbank in shallow graves.

Beyond the Trees also discusses folklore about wendigoes, strange lights, and the mystery of Angikuni Lake, where in 1930 an entire Inuit camp supposedly vanished without a trace. These mysteries and wonders are Shoalts's only companions as he sets out on his own path through the adventure of a lifetime.

What a trip! Enthralling and captivating. Shoalts writes a story that’s for the armchair adventurers sans the bugs. More importantly he reminds us of the inherent need of all of us to seek,find, and absorb the nature around us and preserve it... imagine yourself actually having to get used to talking to people again. Good stuff

Amazingly told, put you right there, the details aren’t overwhelming, this listen kept me transfixed, from chapter to chapter, one of my Favorites on Audible so far, at nearly 60 plus Tittles, Audiitor is believable and Genuine who I believe is the Author, Great armchair Adventurer, and the remote places visited breathtaking A+

This book keep me on the edge of my seat, like he is the author so you know he makes it but like how the EFF does one man, one young man, do that SOLO!!!! Enjoy this book and find out I mean, now I believe it’s time for me to Katie his advice and book a back woods camping trip. Thank you Adam for bringing me into this wild ride!

Adam's a badass and doesn't know it

Adams a badass his adventures are insane. the trips he takes are never ending not only is adam a beast physically his mental aspect is second to none.

An amazing account of an incredible journey, very inspiring and well narrated, definitely worth listening to 10/10

Seeing the northern wilderness through the author's eyes made me consider the tundra differently. Also picked up a few good canoe camping tips!