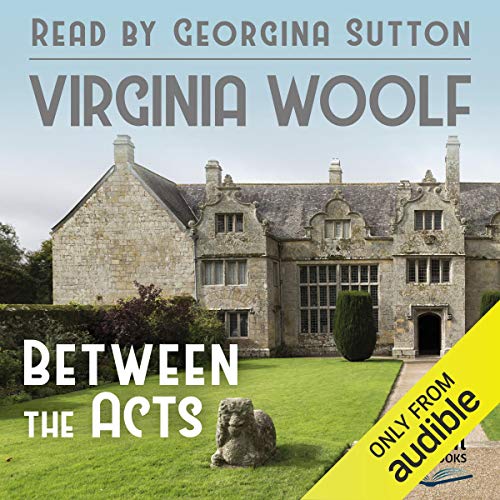 Between the Acts, Virginia Woolf’s last novel, was finished in November 1940 and shortly afterwards delivered to her publisher Hogarth Press. The following March she committed suicide.

Between the Acts is often an overlooked work in her oeuvre because she did express her intention to revise it before publication, though in the event this never happened. So it comes as a surprise to find that, while it probably would have benefited from revision, it is something of an unpolished gem, at times sparkling and actually very engaging. The writing is subtle, varied in tone and purpose; at times serious and complex and at others lighthearted and even downright funny. And unpredictable.

The scene is an English country house, the home of the Olivers, presided over by the elderly Bartholomew – Bart. The date is 1939, the time of the ‘phoney war’, and the village comes to the house and gardens for the annual play put on by the locals. There are complex relationships within the family, and with the local villagers: in true Woolf style, small dramas take place, understated but quietly seismic. And the work is shot through with the phrase, the observation, the sleight of hand, the touch that is her special magic.

With Bart is his sister, the sweetly vague Lucy Swithin, his son, Giles (who works in the city) and Giles’ unsettled, unsure wife, Isa. Taking centre-stage in the story are the amateur theatricals, who undertake to perform three short scenes devised and directed by the eccentric Miss Le Trobe. These three separate scenes, one Shakespearean, one Restoration (a romp this!) and one Victorian, hold the mirror up to society. But what to make of them? The threatened rain holds off so the performances are staged outside in the garden, but the clouds of war are perceptible. Georgina Sutton’s range and sympathy makes listening to this neglected work a surprisingly engaging, very English experience.

Narrator excellent. Waves and sea again from Virginia. Water where she finished her anguish sadly.