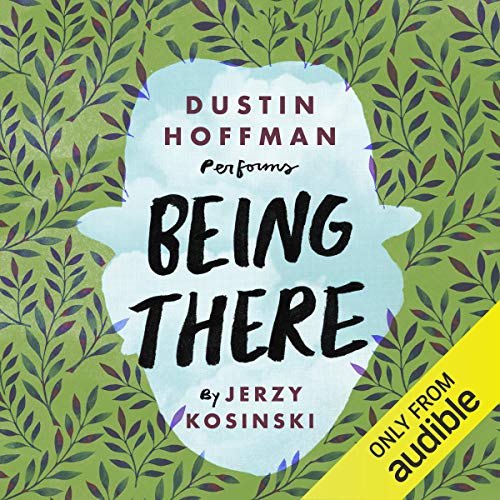 "Dustin Hoffman's performance of this spare and provocative novel is a revelation. The story is surreal (though certainly not difficult and certainly highly amusing); to deliver it, what is needed is not pacing or vocal pyrotechnics but a thorough, thoughtful understanding of the text and the restraint to perform only exactly what is there." (AudioFile)

Jerzy Kosinski’s clever parable of a naive man thrust into the modern world is more pointed now than ever. Academy Award winner Dustin Hoffman (Rain Man, The Graduate), perhaps best known for his portrayals of vulnerable characters and antiheroes, gives an understated and exemplary performance of this satiric look at the unreality of American media culture.

Chance, the enigmatic gardener, becomes Chauncey Gardiner after getting hit by a limo belonging to a Wall Street tycoon. The whirlwind that follows brings Chance to his new status of political policy advisor and possible vice presidential candidate. His garden-variety political responses, inspired by television, become heralded as visionary, and he is soon a media icon due to his unknown background and vague, yet appealing, conversational nature. Being There was adapted into an Academy Award-winning film, starring Peter Sellers as Chance, in 1979.

Chance is a simple-minded man who has always lived in the same house, where he's always taken care of the garden. He's never learned to read and write and never set food outside the grounds of the house, not even to see a doctor. But his life is turned upside down when the "old man"—the owner of the house—very sick in his very old age, passes away without making any provisions for Chance. Indeed, as far as the insurance company is concerned, Chance doesn't exist at all and might never have lived in the house, since there's not a scrap of paper mentioning him or his role in the household. What Chance does have is a thorough understanding of the world based on the countless hours he has watched television, as well as a very good set of clothes which fit him to perfection and which had once belonged to the old man, so that when he steps out onto the street with his bespoke (to another man) suit and elegant valise and meets with an accident with a chauffeur-driven limousine, he is immediately taken in by the passenger of the car, a Mrs. Rand, and brought to her home to be attended by her ailing husband's doctor who is often there on house calls. The husband, Mr. Rand, when he asks Chance about himself, mistakes our hero's reply and understands that his name is Chauncey Gardiner, whom he assumes to be a successful and very astute businessman based not only on his clothes, but on the remarkably wise observations Chance makes, wherein speaking only of what he knows—which is limited to the realm of gardening—his remarks are taken as being incredibly clever and profound. Before he knows it, Chance is introduced to the President of the USA (a close friend of the Rands) and becomes the man of the hour.

I had seen the movie version when I was just a young girl, where Chance was famously interpreted by Peter Sellers, and I remember the story and the acting making a strong impression on me. So when I saw this newly released (and inexpensive) audio version interpreted by none other than Dustin Hoffman, I pounced on it. Needless to say, Hoffman's reading is brilliant, and the story is still just as excellent and darkly funny as I remember it being, and still all too relevant today. Strongly recommended!

Light, Fun Read with Much Below the Surface

Chance the Gardner, is an illiterate, quiet man who has learned social graces by studying television. When the owner of the home dies, and the attorneys can find no record of him, he is told to leave and is hit by the limousine of the wife of a very wealthy financier.

This simple man becomes infamous as Chauncy Gardner. He meets sophisticated, influential people including the President, ambassadors and is on TV.

People find his simple talk about gardens a profound metaphor for the economy. Loved it!

While it is fun and light - it points out how people look for deep profoundness and answers in what is simply not there.

This is a wonderful story, related by a superb actor.
Many will remember the incredible performance of Peter Sellers in this film. But the narated book is possibly better. I would recommend this to everyone.

This, in my opinion, is what an audiobook should be: a great story read to you by a great reader. Too often in these audiobooks, the narrators adopt different voices for the different characters and try too hard to act out the book. It can get pretty cheesy, especially when a man tries to sound like a woman or a child, or the narrator attempts accents and then gets mixed up about which character has what accent. Dustin Hoffman, who can act rings around most narrators out there, simply reads this book with only very subtle character voice changes. The result is very satisfying. I hope that Audible expands this series.

Still thought-provoking but same as movie

It’s basically exactly the same as the movie, but with a little more sex and a little more internal dialogue. For me the interesting part was realizing how the story isn’t only about how people hear what they want to hear and often mold what others say into something unintended. It can also be seen through a race, gender and class lens. So we’ve got the story of a mentally slow man who is white and who is dressed well. His simplistic statements about gardening are misinterpreted as genius symbolism about economics. Soon he’s hanging out with billionaires, ambassadors and the president of the United States. Imagine whether the mentally impaired words of someone not dressed as well, a woman, or a black man or woman would ever be misconstrued in such a way. Thought-provoking still. Not dated at all.

This is completely different than Painted Bird but it is still excellent. Hoffman is fine with his performance, and a good fit for this novel, not sure his is the best voice for anything of length or gravity though. But this is Gump before Gump and better in my opinion. There is much more going on here than just a straight funny satire. there is much more than I remembered concerning identity and your personal view versus what is foisted upon you by others, or how you adjust to fit other's views, or how they misinterpret your identity or use it for their own ends. And a very prescient novel for it's time picking up on the disconnectedness inherent in our increasing TV and sound bite society, and that's before 500 cable channels and non-stop basement dwelling video gamers and "social media". I love Kosinski and hope someone continues with all his work. He is not for everyone, this being the fun oddball in his work, but though his others are very serious and very tough going at times, they are excellent and fast paced and a little addictive.

so, i really really really enjoyed listening to this audiobook. read by dustin hoffman (great performance), it tells the story of Chance the gardener...who is mistakenly taken to be a brilliant financial, political and literary genius....but is really a gardener. a gardener who cannot read, or write, or really socially interact with people in any normal way.

it was a short (just over 2 hours on audio) book...and it made me laugh and smile the entire time i listened to it.

it basically a satire, turning an eye on how the media, political figures and the rich can be so foolish and fooled. relevant today as it was in the 70's when it was written...


i highly recommend listening to the audio book. it really did make it even better than just reading the physical book.

(ps. i had no idea that this was a film w/ peter sellers, where he was nominated for an oscar. need to go rent that NOW)

I very much enjoyed this book. I love the movie Being There with Peter Sellers and Shirley MacLaine...it is one of my favorite movies. The movie is quite true to the book overall and I can generally see the reasons for the changes they made for the movie. Peter Sellers performance was superb. In the book, you can really delve into the thoughts of the lead character, Chance the gardener, which is great! I think the movie creates an excellent portrayal, but a book can reveal more "silent" detail as this one does. Dustin Hoffman performs an excellent narration for this book. I feel he portrays the natural tone of it very well: I could say it is a more subdued or subtle narration which was ideal while still being interesting, entertaining and enjoyable for listening. Highly recommend both this audiobook and the movie!!

Where does Being There rank among all the audiobooks you’ve listened to so far?

This is a cute story. Dustin Hoffman reads Jerzy Kosinski's words with style and gentleness. It is one of the best short stories I have ever listen to.

Chance is so likeable.

What does Dustin Hoffman bring to the story that you wouldn’t experience if you just read the book?

He can change his characterisation and you forget it is he you are listening to. He is a delight to listen to.

If you could rename Being There, what would you call it?

You wonder if this Forrest Gump style story could happen. Most people do hear what they want to. They fill in the gaps and make it up to suit them. I liked the movie and the book is beautiful. Dustin Hoffman is brilliant. What more could be said.

loved Being There. Everything I hoped for and more. Concise commentary of the simulacra of TV and allegory of media as spectacle. A postmodern masterpiece.

I'd never read any Kosinski before and only bought this book as I'm a fan of Dustin Hoffman. As you'd expect from such an accomplished actor, Hoffman's narration is superb; I'd have him read all my books to me if I could! What came as a pleasant surprise, though, was that the story was as good as the performance. It's a really touching, funny story and my only complaint would be that there wasn't enough of it. It could have been twice as long and I still wouldn't have wanted it to end. I would definitely recommend it to a friend.

at first i couldn't stand the book. but further along i went the better it got, i really enjoyed it.

Dustin Hoffman is a master storyteller with that voice. I got very immersed in this one, it was just so easy with the simple, but somehow powerful, way this story is told. Five starts all round, writer and performer!

Dustin Hoffman is a brilliant narrator, I picked this book because of him really. I enjoyed it nevertheless.