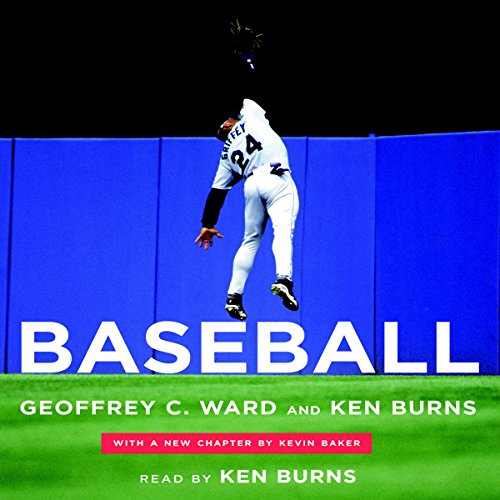 “A rich concoction of narrative, essays....In so many ways you are reminded that rooting for baseball is like breathing.” (Christopher Lehmann-Haupt, The New York Times)

The companion to Ken Burns’s magnificent PBS television series—updated and expanded to coincide with the broadcast of a new, two-part "Tenth Inning" directed with Lynn Novick.

The authors of the acclaimed and best-selling The Civil War, Jazz, and The War turn to another uniquely American phenomenon: baseball. Geoffrey C. Ward's and Ken Burns’s moving and fascinating history of the game goes beyond stolen bases, double plays, and home runs to demonstrate how baseball has been influenced by, and has in turn influenced, American life.

The audiobook covers every milestone of the game, from the rules drawn up in 1845 by Alexander Cartwright to the American League’s introduction of the designated hitter in 1973; from the 1924 Negro World Series to Jack Roosevelt Robinson’s major-league debut; from the first curve ball in 1867 to Nolan Ryan’s seventh and last no-hitter in 1991.

This new edition brings the authors’ monumental work into the 21st century: steroids, home-run records, the rise of Latino players, the long-awaited Red Sox World Series victory, and so much more. Baseball is an audiobook that speaks to all Americans.

Wish it wasn't. Still worth listening to, but the documentary is longer than the audio book.

Ken Burns is a tremendous documentarist...not such a tremendous reader. If you like baseball, you'll greatly enjoy the anecdotes and various tidbits that make up this generally entertaining tale. The book covers virtually the entire history of the game is such a relatively short time, but you don't feel shortchanged at the end. It was quite difficult at times, however, to not get distracted by the narrators (Burns) somewhat high-pitched, slow, sterile reading style.

Outside perspective of Ken Burns I like the soft voice describing a hard game . brilliance

Well done story concisely hitting the highs and lows of our nations past time. Perhaps a different deeper voice each inning to break the monotony of Mr.Burns voice.

You Kind of Missed Someone

I understand the controversy around Ty Cobb, but to pretty much remove him from the book version of Baseball is unacceptable. He was the game's first superstar and perhaps the best hitter who ever lived--you can't ignore that.

This was an amazing book for learning new facts about baseball. Listening to various stories and remembering where I was when they took place. I loved it!

a condensed version of the documentary, but still worth the listen .. It doesn't have quite the same romantic presentation as does the video, sans Peter Coyote's voice and choice of music, but the information presented is still worth a visit as a companion to the video