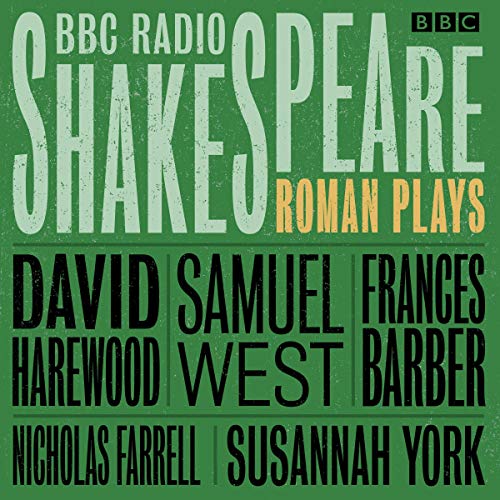 This updated version of Shakespeare's classic play is set in Italy in 1925. Julius Caesar, a new Roman dictator, has swept to power, and his way is clear to assume total control - unless a coup by Cassius and Brutus can alter the tide of history. Nicholas Farrell stars as Brutus and Gerard Murphy as Julius Caesar.

When Rome's greatest hero, the warrior Coriolanus, divides the people and the patricians through his arrogance, he is driven into exile. Samuel West stars as Coriolanus, with Susannah York as Volumnia.

Shakespeare's last great tragedy is an action epic set against the political backdrop of the Roman Empire and the centre of Egyptian culture, Alexandria. But at the heart of the play is the story of what happens when two people fall in love. Starring Frances Barber as Cleopatra and David Harewood as Mark Antony.

Thank you BBC Radio and narrators.

William Shakespeare is an outstanding author and the plays here are amazing to listen to.