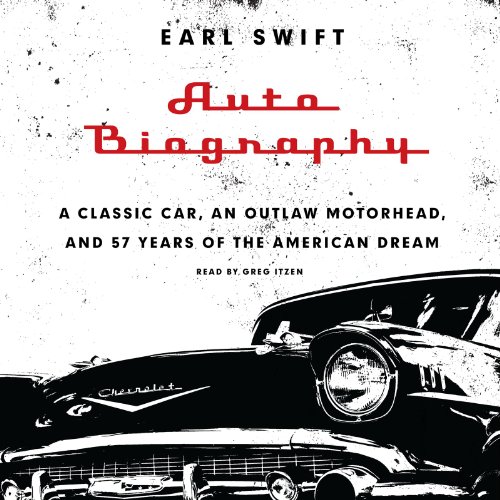 A brilliant blend of Shop Class as Soulcraft and The Orchid Thief, Earl Swift’s wise, funny, and captivating Auto Biography follows an outlaw-genius auto mechanic as he painstakingly attempts to restores a classic 1957 Chevy to its former glory - all while the FBI and local law enforcement close in.

To Tommy Arney, the old cars at Moyock Muscle are archeological artifacts, twentieth-century fossils that represent a place and a people utterly devoted to the automobile and transformed by it. But to his rural North Carolina town, they’re not history; they’re junk. When Tommy acquires a rusted out wreck of an old Chevy and promises to return it to a shiny, chromed work of American art, he sees one last chance to salvage his respect, keep himself out of jail, and save his business. But for this folk hero who is often on the wrong side of the law, the odds of success are long, especially when the FBI, local authorities, and the bank are closing in.

Written for motor heads and automotive novices alike, Auto Biography interweaves this improbable hero’s journey with the story of one iconic car to chart the rise, fall, and rebirth of the American Dream. Told in words and eight pages of photos, this wise, charming, and heartbreaking true story is an indelible portrait of a man, a machine, and a nation on the road from a glorious past into an unknown future.

interesting characters and story line. both me and my 15yo son enjoyed it. if you like old cars you'll love this.

It's almost an interesting story but not quite. The writing is fine, the narration is spot-on, but the whole pedigree of the car weaved through with the train wreck of this guy's life just doesn't work.

I have some rough edges to my own background and have known guys like the protagonist and where there's smoke, there's fire. He no doubt was one of the toughest guys around, but the author has repeated many a tall tale without any giving any discernible second thoughts to the chance that maybe he has bought into the mighty myth a little too deeply.

Or maybe I was just more interested cars. And citing "Shopclass as Soulcraft" in the blurb was not accurate.

This is a great story

I hadn't thought I'd find this interesting but what a great story! Very well told as well.

Detail well researched. Besides getting to know the owners of the 57 wagon there was much to be learned about classic car history.
tim@somedayclassiccars.com