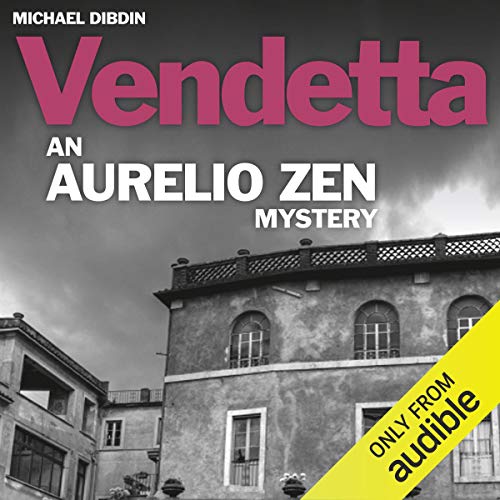 Inspector Zen has a problem: an impossible murder, recorded on the closed-circuit video of Oscar Burolo's top-security Sardinian fortress. As Zen gets to work, he is once again plunged into a menacing and violent world where his own life is soon at risk. A major TV drama series on BBC One starred Rufus Sewell as Zen.

The combination of compelling story telling, trenchant humor and delicious characterizations conspire to make this a classic Zen mystery. Michael Kitchen owns this series in his mastery of the ironies and complexities of tone in Dibdin's terrific book.

It took me a while to warm up to Kitchen's venomous delivery, but he settled down and the brilliance of Dibden's plotting and characterization took over. Dibden communicates a wonderful sense of place and a subtle humor. While the elegance of his style comes through with every sentence and transcends genre, it took me a while to appreciate the economy of the writing. Worth every minute!

Michael Kitchen brings this to life. Great actor, great reader. Perfect for mystery lovers looking for something a little different.

Yes, particularly if they have been to Rome or Sardinia

Obviously has to be Zen, tries his best to be high moralled but really just wants an easy life without having to put in too much effort

It took me a while to get into Kitchens style but have since bought another in the series. It's worth persevering because he is a great fit to Zen's laid back personality.

No I listen while commuting by bus.

I look forward to more books in the series but it's disappointing there are gaps. I would like to know why.

Plot is a real stretch

Would you listen to Aurelio Zen: Vendetta again? Why?

Dual vendettas was a good plot device but was dragged out for far too long.

Zen and the Mercedes had me laughing out loud.

I find Italian justice from Michael Dibdin's perspective fascinating and, given that the author apparently lives in Seattle, wonder how closely it reflects reality.

This series just gets better

Michael Dibdin has really improved in his writing and his descriptions are fantastic. Michael Kitchen does an excellent job narrating this book. Aurelia Zen character is further developed nicely and it is a shame that the BBC cancelled the TV Series. Great book which you could read on its own. I am going to pass this onto my mother who I am sure will enjoy this book.

If you could sum up Aurelio Zen: Vendetta in three words, what would they be?

The quirky, unconventional protagonist. The intimate navigation of Roman streets and neighborhoods.

Have you listened to any of Michael Kitchen’s other performances before? How does this one compare?

No I haven't, but will actively seek him out.

I rarely have extreme reactions to books, but that doesn't mean that this one wasn't a very pleasurable experience from beginning to end.

This was my first Aurelio Zen experience, but will certainly not be the last.

"Everyone who used him for their own purposes seemed very satisfied with the results."
-Michae Dibdin, Vendetta

This is my third Zen novel and I really seem to be c()cking up the order of it. I started with Book One (Ratking), fair enough, but I also bought and read Book Five (Così Fan Tutti), so now I'm trying to bring some order back into my life. There really is something attractive about these novels. I'm certain half of the mild success these novels have had are due to Dibdin discovering a near perfect character (Zen) and a near perfect setting (Rome, Sardinia). Zen isn't perfect. He lives with his mother. He exists in an almost Kafkaesque Italian police bureaucracy where his competence almost nearly costs him either his life or his job. But still he grinds on, and things seem through Karma to sort themselves nearly out at the end.

If you like Raymond Chandler or Hammett's noir novels, these ones won't disappoint you too much. They also reminded me a bit of Church's Inspector O (A Corpse in the Koryo, Bamboo and Blood, etc) novels (police investigations in North Korea). I guess there really are unlimited ways you can tell a story about an ethical man trying to escape the maze of an unethical bureaucracy while hot on the trail of a killer.

Also, one final note, the BBC's Zen 3 episode series is also worth checking out. I'd read the first three Zen novels first (Ratking, Cabal, Vendetta), but even without the novels the show is interesting.

Which character – as performed by Michael Kitchen – was your favorite?

Ellen was Zen's lover in the first book. She is American and leaves for NY. In this book he is passionately in love with Tania, but in the book, she is not Tania Moretti, but another last name. The film series differs in that way and others. The property where the killing occurred is on the island of Sardinia instead of near Rome. The author does a good job describing Sardinia. But after listening to this story, I am NOT going to put Sardinia on my top ten places to go to, haha.

Zen's mother is also different from the film series. In the book she is older and pettishly boring. She complains all the time about Rome. She is taken care of by another woman all day so she has nothing to do except to watch tv all day. In the film series and book, Zen does not "connect" with the women in his life, especially in the first book; resulting in Ellen the American leaving him. I think he is just too stressed out from his job to have any energy left over for any kind of normal relationship. He needs more vacation days.

As usual, Kitchen does a fantastic job and I think he conveys Zen's personality really well.

Great performance of a good story

Michael Kitchen -- Inspector Foyle in the great BBC Foyle's War series -- delivers a magnificent reading, combining world-weariness, wry humor, and dramatic tension, emphasizing each exactly as appropriate. The story is a bit far fetched, but the settings in Rome and Sardinia are fun ( a flash map of Rome is handy) and the portrayal of a deeply corrupt and cynical law "enforcement" establishment is fascinating.

I think this is the beginning of zen as a character developing rather than the first book which could have been a one off murder mystery. looking forward to the next book in the series!

Very enjoyable, I am becoming quite a fan of Zen . Good story and narration.

Loving Zen as a character and love the narration

What did you like most about Aurelio Zen: Vendetta?

I am beginning to learn more about the character of Zen, how he thinks and the type of person he is. I enjoyed the story too and the characters.

When he went to pick up his mother. Italian men do love their mothers!

Stick with the narration. I said this about The Rat King as well. I think Michael Kitchen is great. He reads like Zen thinks. It does have lots of pauses - but that is Zen. I really can picture him and think the narration really adds to it.

I love this character!

Unfortunately I had to give up on this because the narrator's careless delivery got on my nerves so much.

Too many pauses in mid sentence !

I love Micheal Kitchens voice and as his Character in Foyles War, but his constant pausing in mid sentence delivering each.....word.....with.....a......long....pause spoilt this book for me.

As much as I like the TV series I cannot listen to another Zen audiobook, I wish I had tried the samples first !

Discovering Aurelio Zen is like being introduced to Sherlock Holmes and PG Wodehouse at the same time. Excellent writing, great plots and the peerless Michael Kitchen's delivery is the cream on top. Gorgeous.

completely lost track of what was happening

very convoluted and rambling. really no idea what happened in the end. not my favourite

Was surprised by these novels. Hadn't heard of them. Fill of great description memorably characters and some very amusing incidents amongst the deaths and suspense. Occasionally a bit overwritten but mostly very good prose...breaking out of the dry detective mode into the literary. The narrators style can be full of too much actor emphasis but once dialogue and story gets moving it's well done. I rarely laugh out loud but found my self doing so with pleasure. Long leisurely descriptions of place people and action which are usual in this genre.

I love Michael Kitchen as an actor but someone else should have read this book. His voice was excellent at sending me to sleep!

I'm sorry but I couldn't get to the end because I did not enjoy the reader.

Who might you have cast as narrator instead of Michael Kitchen?

Someone with more animation and flow.

Was Aurelio Zen: Vendetta worth the listening time?

I'm afraid it wasn't. I'm disappointed as it's just the sort of book I love reading . (I love Donna Leon books and hoped this might have the same sort of atmosphere.)